A. Sutherland - AncientPages.com  - Cardinal Richelieu (1585-1642) known as the "Red Eminence" was a political genius and a French statesman who created the power of France and absolute monarchy. He was Cardinal from 1622 and Duke of Richelieu and Fronsac from 1631 and the one who broke the power of the Huguenots (French Protestants) who followed Calvinism. 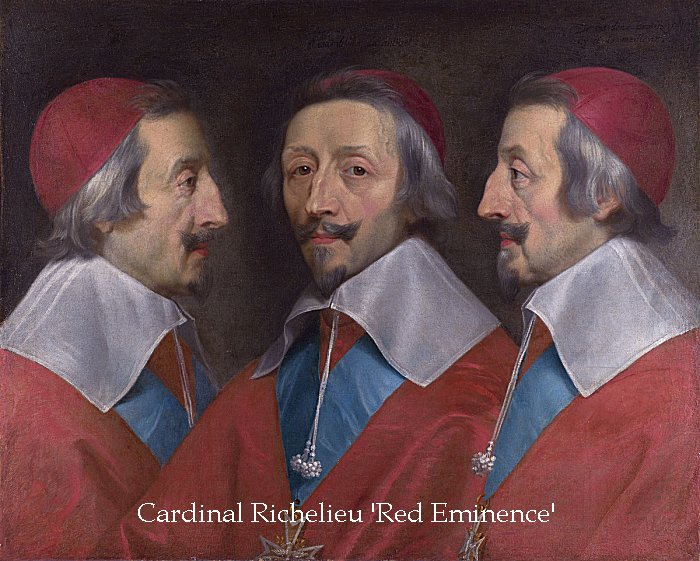 He introduced France into the Thirty Years' War hoping that after its end, the King of France will be the ruler of neighboring countries. He believed that the king had the divine right to promote peace and order in society. Richelieu followed the maxim that "the ends justify the means."

He had the ability to find himself in the right place and time, a gift, which usually people’s careers relied on.

Richelieu had one and clear goal - the monarchy and he had huge ambitions to achieve far-reaching power.

Undoubtedly, he was a person, with extraordinary ability to analyze all the circumstances of the political game very quickly and to draw right the conclusions. In fact, in Richelieu’s biography, there are not many tactical decisions that could be questioned.

Richelieu was the third son of the Lord of Richelieu. He was not a rich man and at first, he only administered a small and poor diocese. This man thanks his brilliant brain and extraordinary abilities come to dominate France from 1624 to 1642.

In 1606, Richelieu was appointed by King Henry IV bishop of Luçon and in November 1616, he entered the Royal Council as head of the diplomacy. He was an educated, handsome, elegant, eloquent 31 years old bishop and politician who had good relations with everyone around him, including Louis XIII, important princes, and other prominent figures, the Paris Parliament.

In 1622, thanks to the protection of Louis XIII's mother, Marie de Médicis, Pope Gregory XV appointed him Cardinal.

As early as in 1624, he was appointed by Louis XIII as the prime minister of France. He became a prominent figure in French politics and skillfully faced the atmosphere of plots, intrigues, and political maneuvers of all kinds.

He soon began to overcome many political adversities. His intellect was powerful, analytical and largely relied on reason, strong will, and the ability to rule others. Richelieu used political power very effectively, but it was not an easy task.

He was subjected to terrible pressure and intrigues within the country and external enemies. Richelieu had many enemies who tried (though unsuccessfully) to harm him. A dozen conspiracies and plots have been tied to the cardinal's life but he managed to calm everyone. 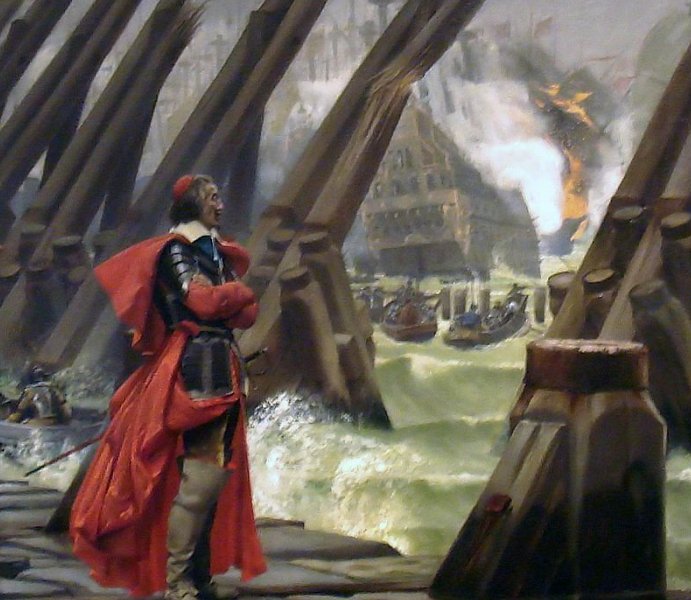 He had to conduct foreign policy towards about 65 hostile and foreign political subjects and some hostile rebel national centers. It required extraordinary political skills to win with them and most of time, Richelieu succeeded. His central power center in Paris had only commanding messengers carrying out orders.

Most important letters were encrypted by his office that could also broke other codes. The cardinal also invented the first real political newspaper.

Defeat Of The Huguenots And Granting Of Freedom Of Religion

In the years 1625-1628 he waged war against the Huguenots, one of the main forces opposed to the king.

Having defeated the Huguenots in 1629, he issued an edict of grace that ordered the Huguenots to resign from political independence and give back fortresses, but at the same time he guaranteed freedom of religion. On November 11, 1630 he was appointed Minister of France.

Without mercy, he broke the nobility's opposition. He introduced a number of reforms including weakening the position of the aristocracy. In 1630, he forbade the aristocrats to trade, and shortly thereafter, he forbade them to conduct private wars and to have fortified castles (existing ones were to be bought out).

His Accomplishments For France Were Significant

Richelieu is considered one of the creators of the strong royal authority in France. He reformed the country’s navy and army. He also defeated rebellions and advanced royal absolutism. He wanted to make France the greatest power in Europe using his tough and ruthless but apparently efficient methods.

It was said that people either liked Richelieu or hated him, there was no other alternative.

"I have the consolation of leaving your kingdom in the highest degree of glory and of reputation."

Patience and stubbornness were one of the cardinal's political weapons. Dying, advised by his confessor to forgive all his enemies, he declared: "I have no enemies but France has many enemies."

Blanchard J-V. Éminence: Cardinal Richelieu and the Rise of France