AncientPages.com - Is the story of the ancient Chinese 'Great Flood' really true?

Scientists are convinced the event is real and they have now found evidence of one of the largest known floods to have happened on Earth during the past 10,000 years. This evidence may now re-write history.
An ancient Chinese legend tell of how many years ago a great flood swept over the country. Villages for miles around were swallowed by the huge waves and many people and animals died. 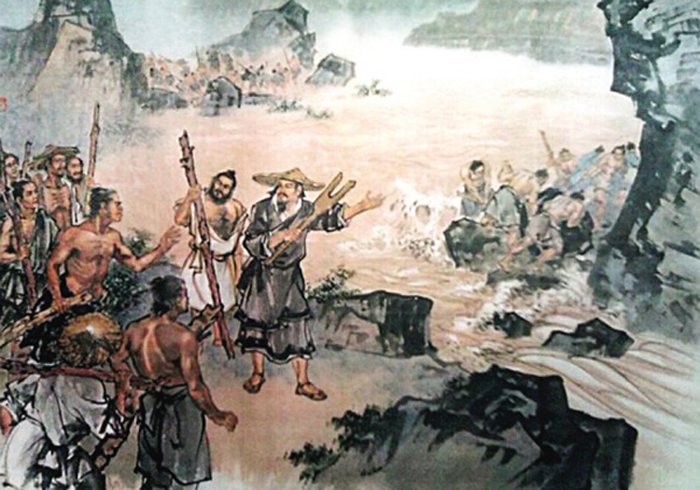 The ancient myth of the Great Flood turns out to be true.

Trees, plants and building were totally destroyed. Yet a king arose out of the destructive floodwaters. By dredging of the flooded lands, he founded the Xia dynasty that would live on centuries.

Emperor Yu gained fame as the man who was able to gain control over the flood by orchestrating the dredging work needed to guide the waters back into their channels.
Restoring order after chaos earned him the divine mandate to establish the Xia dynasty, the first in Chinese history.

Scientists have now found evidence that this ancient Chinese legend is true and this cataclysmic event did indeed happen.

A team of archaeologists and geographers, led by Qinglong Wu at Peking University, in Beijing, China has discovered sedimentary evidence that confirm the ancient Chinese flood myth.
In roughly 1920 B.C when China was transitioning from the Neolithic era to the Bronze Age, an enormous flood on the Yellow River barreled down a corridor now known as the Jishi Gorge, into the Guanting Basin in central China. 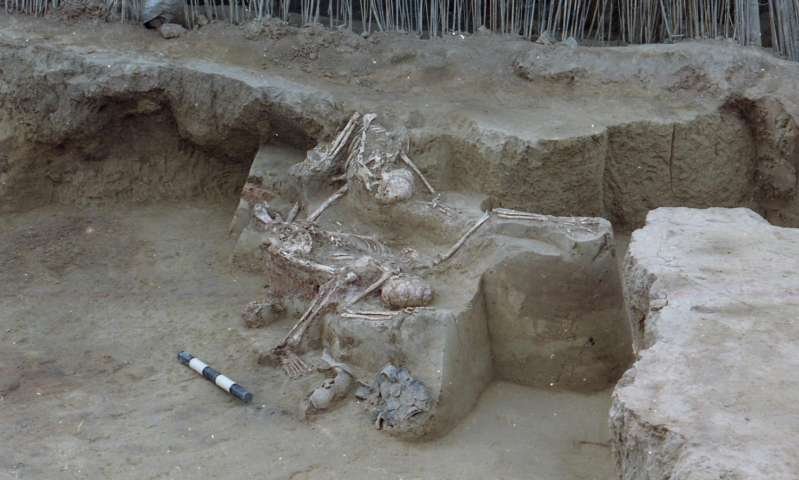 A view of the skeletons in cave F10 from another direction at Lajia site. Credit: Cai Linhai

By carbon dating two different types of soil samples of what was once the ancient earthen dam, scientists were able to reveal that about 4,000 years ago, a massive earthquake struck central China creating a massive landslide in deep, narrow valley with rocky, steep sides. That landslide corked up the gorge, forming a pyramid-like dam of rock and dirt that blocked the Yellow River. The researchers estimate the damn held for about 6 to 9 months and when it finally broke the waters cause massive destruction. 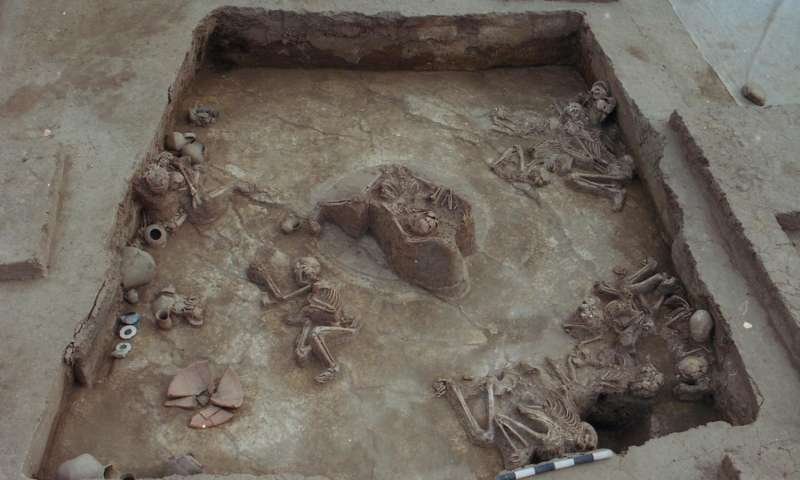 "By identifying those sediments, and carefully surveying their locations, on both sides of the valley, we were able to find out the dimensions of that flood channel, so the size of it and the shape of it, and exactly how high the flood waters reached," Darryl Granger, a geologist at Purdue University in Lafayette, Indiana said.

This was without doubt an ancient cataclysm of massive proportions.

"It's among the largest known floods to have happened on earth during the past 10,000 years. And it's more than 500 times larger than a flood we might expect on the Yellow River from a massive rainfall," Granger explained.

The floodwaters surged to 38 meters (yards) above the modern river level, making the disaster "roughly equivalent to the largest Amazon flood ever measured," he told reporters on a conference call to discuss the findings. The flood would have been "more than 500 times larger than a flood on the Yellow River from a rainfall event," he added.
"This cataclysmic flood would have been a truly devastating event for anyone living on the Yellow River downstream."