Ellen Lloyd - AncientPages.com - On December 13, the Feast of Saint Lucy is celebrated in some countries. This special Christmas holiday is very important, mainly in Scandinavia and Italy.

It's called St. Lucy day (also known as St. Lucia Day). The celebration is in honor of Saint Lucy. She was a martyr who became a patron of the blind and those with eye disorders who died during the Diocletianic Persecution.

The woman was killed because she wanted to help poor people

Known as St. Lucia of Syracuse, the woman was honored in the Middle Ages and remained a well-known saint in early modern England. According to legend, she brought food and aid to Christians hiding in the catacombs using a candle-lit wreath to light her way and leave her hands free to carry as much food as possible. 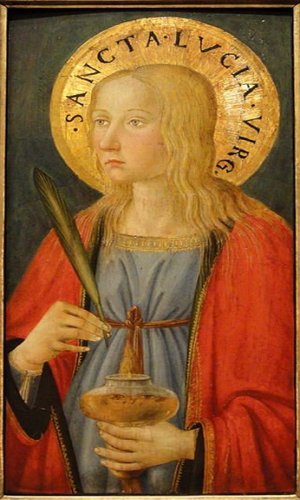 Lucy was born to rich and noble parents about the year 283. Her father was of Roman origin but died when she was five years old, leaving Lucy and her mother without a protective guardian. Her mother's name Eutychia seems to indicate she was of Greek origin.

Lucy was deeply religious and wanted to devote herself to God. She didn't want to get married. Instead, she wanted to do something for poor people.

However, her mother feared Lucy's future arranged marriage to a young man of a wealthy pagan family.

Lucy's mother suffered from a bleeding disorder, and her condition made Lucy deeply worried.

The saint told Lucy that because of her faith in God, her mother would be cured and Lucy would be Syracuse's glory, as she was of Catania.

With her mother cured, Lucy took the opportunity to persuade her mother to allow her to distribute a significant part of her riches among the poor.

The Pagan man who proposed to Lucy was furious when he heard the news. He decided to destroy Lucy's life, denouncing her as a Christian to the Governor of Syracuse, Sicily.

When the Governor of Syracuse learned the jewelry had been given away to the poor, he became furious. The governor sentenced her to forced prostitution, but when guards went to fetch her, they could not move her even when they hitched her to a team of oxen.

The governor ordered her killed instead. After torture that included having her eyes torn out, she was surrounded by bundles of wood set afire; they went out. She prophesied against her persecutors and was executed by being stabbed to death with a dagger. Her name is listed in the prayer "Nobis quoque peccatoribus" in the Canon of the Mass. 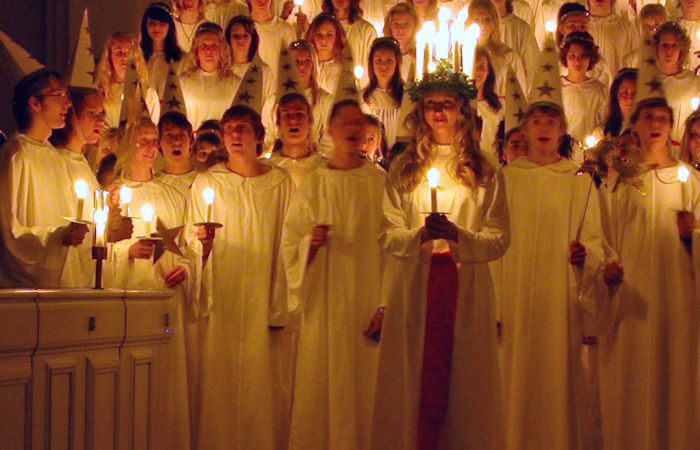 Legend says her eyesight was restored before her death. That was why she became the patron saint for people who are blind and suffer eye disorders.

St. Lucy (Lucia) feast day brings many different celebrations in various countries. Her feast is also tied in with the celebration of light and winter, as her name means light, and her feast day originally coincided with the winter solstice, which marked the shortest day of the year.

In Croatia, there is a custom to plant the Christmas wheat on the feast of St. Lucy. Plant the seeds into a small soil dish, and place the plate in a moderately warm room, keeping it watered. By Christmas Eve, the fresh wheat shoots should be about 8 inches of soft green. 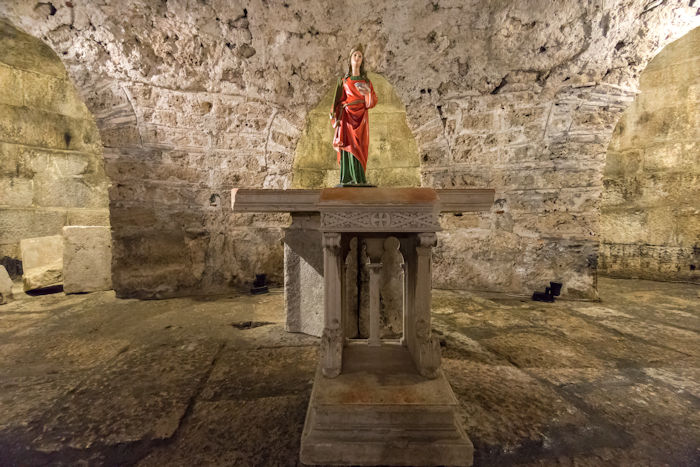 Crypt of Saint Lucy, under the Cathedral of Saint Domnius in the Diocletian's Palace in the ancient city of Split in Croatia. Credit: Adobe Stock - Barbara

The wheat then can be placed next to the manger or crib scene as a gift to Jesus and a reminder to us of the Eucharist, which feeds our souls and as the staff of life that nourishes all of mankind. It can also be used as a table decoration, with a candle placed in the center.

Saint Lucy is celebrated all over Italy. Sicilians still commemorate Saint Lucy's intervention during a severe famine in 1582. Miraculously, ships filled with grain appeared in the harbor on December 13.

It is custom to dress a girl in a white dress with a red sash around her waist and a crown of candles on her head. There was a time when real candles were used, but this was much too dangerous. Instead, Lucia's girl wears a crown with white lighted electronic candles. 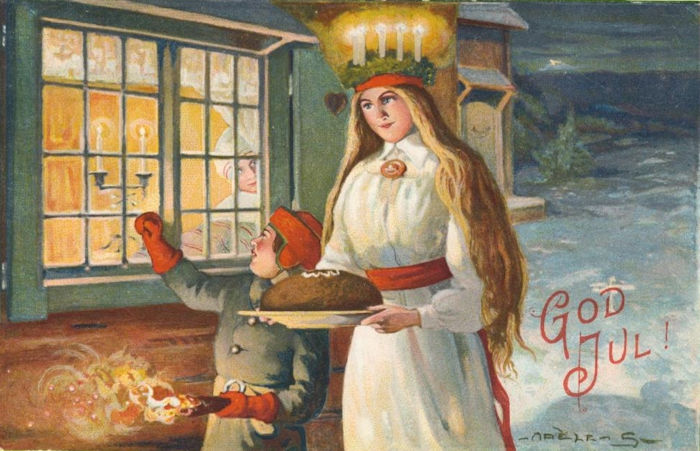 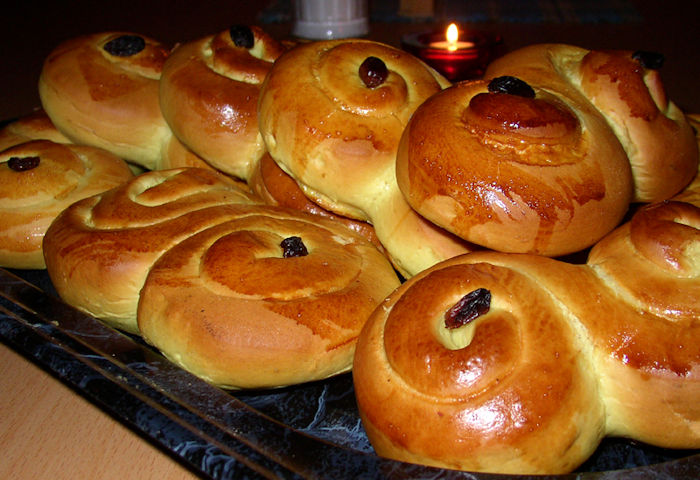 It is custom to eat plenty of "Lussekatter" (Lusse buns) on the feast of Saint Lucy. Credit: Per Ola Wiberg - CC BY 2.0

Small children sometimes like dressing up as Lucia (with the help of their parents!). Also, boys might dress up as 'Stjärngossar' (star boys), and girls might be 'tärnor' (like Lucia but without the candles).

On St. Lucy's day in Sweden, it's very popular to eat so-called "Lussekatter," buns flavored with saffron and dotted with raisins.

The feast is charming to watch in the northern part of the country, where you can see the Lucia procession walk outdoors in the dark from house to house in the snow holding candles.