A. Sutherland  - AncientPages.com  - According to Greek mythology, Laocoon was a Trojan priest who offended the gods. As punishment, Laocoon and his two sons were strangled by sea serpents. 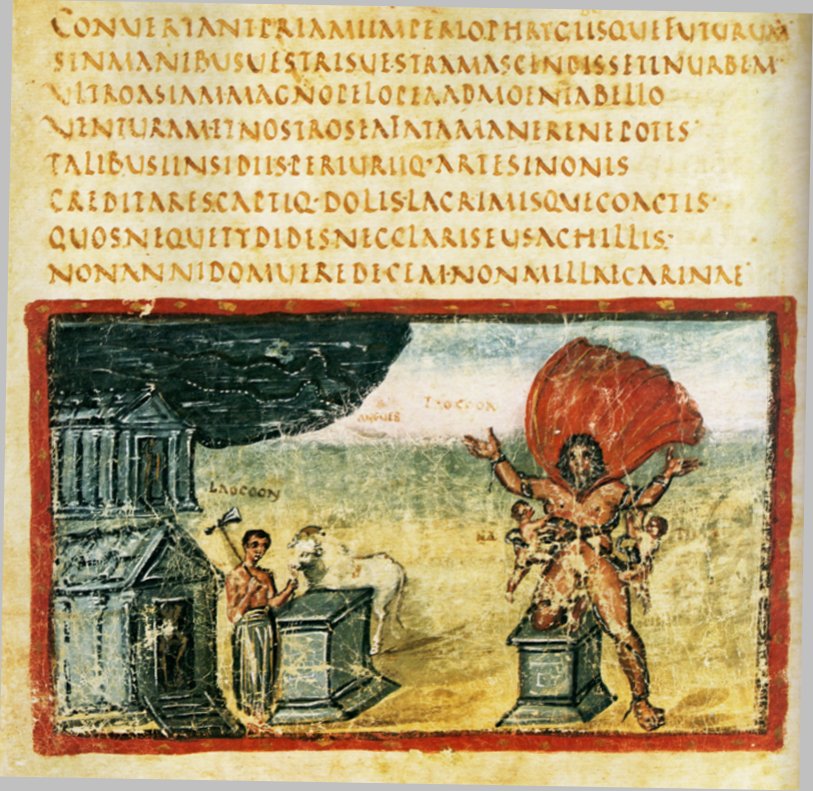 The stories from ancient Greece also tell us that the walls of Troy were built by the two powerful gods - Apollo and Poseidon while they were in exile for rebellion against the mighty Zeus.

By marrying a woman (he also had two sons), the priest violated the celibacy order, thereby incurring the wrath of Apollo.

Laocoon was a Trojan mystic, clairvoyant (or priest) of Apollo. He was the one who warned the Trojans against the wooden horse and was killed together with his sons. To capture Troy, the Greeks had to do some tricks, which ended tragically for Troy.

The above artwork depicting Laocoon with his sons - perhaps the most famous of all statues of antiquity – was discovered in Rome during the Renaissance.

The artisans were three sculptors of Rhodes in the first century BC, where the Rhodians, flourishing merchants, and sailors were allies of the Romans, and as such, they claimed descent from the Trojans via Aeneas.

Long-Lasting Conflict Between The Ancient Greeks And The Trojans

Over 3,000 years ago, a horrible war broke out between the ancient Greeks and the Trojans. It lasted for ten years, and neither side seemed to be able to win this war. 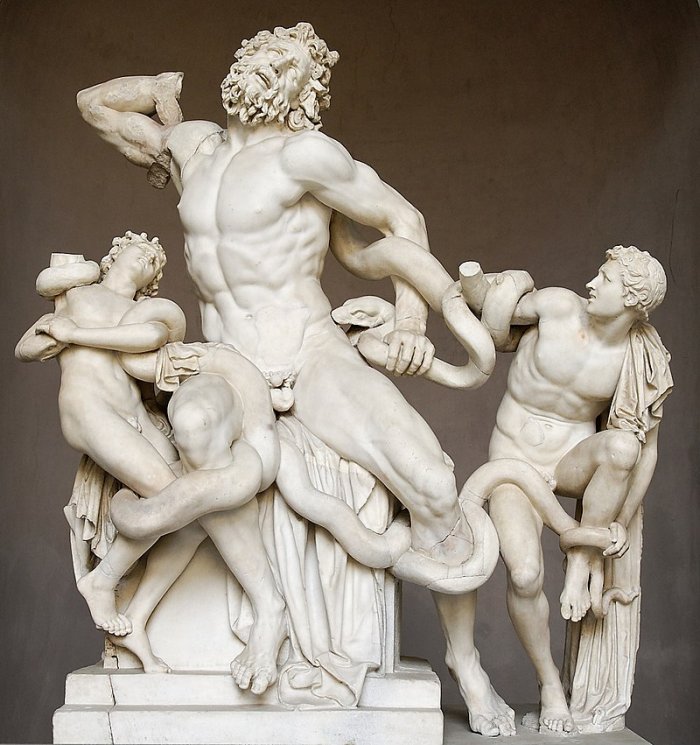 Laocoon and His Sons in the Vatican. Hagesandros, Athenedoros, and Polydoros - Marie-Lan Nguyen (2009). The statue is stored in Vatican Museum – Public Domain

Quintus, a Greek epic poet who flourished in Smyrna in the late 4th AD, is the most detailed description of what happened to Laocoon and why.

The Achaeans, one of the major tribes of Greece, boarded ships and held boisterous gatherings, pretending to go home and leaving their camp empty. Instead, they hid behind the island of Tenedos. Pouring out of the city gates, the Trojans entered the abandoned camp.

Everyone wanted to go into the empty tents and look at Achilles's tomb. In amazement, the crowd surrounded a giant wooden horse, similar in size to a ship. The inhabitants of Troy began to think about where it came from, what to do with it, perhaps set it on fire, throw it into the sea or see what's inside.

Suddenly, something extraordinary happened in front of the standing crowd. Laocoon appeared from behind the top of the hill with a spear in his hand and several others. He approached the Trojans and said: "Do not trust the Horse, Trojans. Whatever it is, I fear the Greeks even bearing gifts." (Virgil's The Aeneid 2.49)

He begged them to set fire to the Trojan horse to ensure it was not a trick, but they did not want to listen.

After these words, Laocoon threw a spear with great force into the wooden belly of the horse. The horse responded with the ringing of weapons, foretelling the death of Troy, but no one listened to this sound because the gods made the people deaf.

In vain, Laocoon tried to warn the Troja's citizens, but nobody listened. At that moment, everyone saw that two giant snakeheads had poked out of the sea. 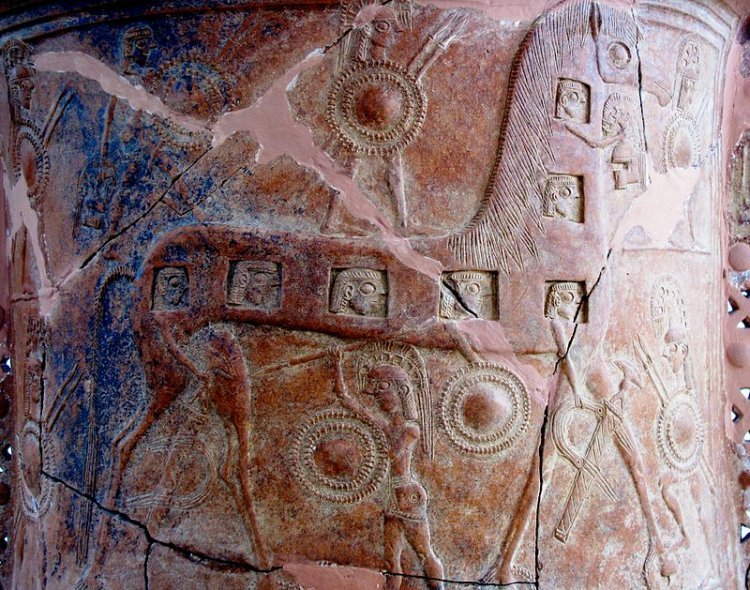 The Mykonos vase, with one of the earliest known renditions of the Trojan Horse. (Note the depiction of the faces of hidden warriors shown on the horse's side.) Image credit: Travelling Runes - CC BY-SA 2.0

Angry with him, Athena (or Apollo) shook the ground around the priest's feet and painfully blinded him. However, the god Apollo sent the sea serpents to kill Laocoon and his two sons.

Yet another version of this dramatic story is that Laocoon was punished for procreating upon holy ground sacred to Poseidon. Only unlucky timing caused the Trojans to misinterpret his death as punishment for striking the horse.

Snakes Emerged From The Sea To Murder Laocoon

Snakes moved through the water, bending in giant rings. Once on land, they attacked the priest's sons, and when the father rushed to the aid of the young men, they seized him, entangling his strong but now totally defenseless body. Leaving the dead, the snakes, without touching anyone else, crawled to the temple of Athena, where they lay down at the feet of the statue.

Laocoon, the priest of the god Apollo, was either punished for doing wrong or for being right.

The Trojans stood shocked for a long time until someone said that the priest got what he deserved because he threw a spear at the shrine of the goddess, and she punished him. The Trojans believed the horse was a gift and dragged him to the city's gates.

"O unhappy citizens, what madness? Do you think the enemy's sailed away? Or do you think any Greek gift's free of treachery? Is that Ulysses' reputation? Either there are Greeks in hiding, concealed by the wood, or it's been built as a machine to use against our walls, or spy on our homes, or fall on the city from above, or it hides some other trick: Trojans, don't trust this horse." Whatever it is, I'm afraid of Greeks, even those bearing gifts. (Virgil, Aeneid II.1-56)

As the fall of Troy was close, Laocoon was already dead. Now only Cassandra was the only one who could warn the citizens of Troy of the terrible danger. But, no one in the city wanted to offend the goddess Athena, so the mysterious large horse was dragged into the city. None of Troy's gates was big enough to get it in, so they had to tear down a piece of the city wall to get the wooden statue inside.

At night, when the citizens of Troy had fallen asleep, the Greek soldiers came out of the Trojan Horse and killed the guards on the walls. They opened the gates of Troy and signaled the Greeks hiding nearby to storm the city. There was a big battle, and the town was destroyed. The Trojans could not win this war; the Greeks did.

Laocoon's story symbolizes the tragic but, at the same time, heroic death of a strong, wise person who strongly resists the predestination from above.

The two snakes are too important because they represent a highly complex and universal symbol strongly associated with prophecy and wisdom. In Greece, the snake is a sacred animal of Athena. Additionally, we must remember that the image of a snake symbolizes death. Two snakes - this symbolism refers us to the Egyptian world serpent, Apop, everlastingly consuming its tail.

The Trojan horse symbolizes secrecy and betrayal, but unfortunately, only the priest Laocoon and Cassandra strongly suspected deceit.

Shane Roberts, The Green New Deal: Back to the Stone Age?