Ellen Lloyd - AncientPages.com - There are accounts of battles between good and evil forces in every religion. Myths from cultures worldwide offer fascinating stories dealing with benevolent and malevolent characters.

"Among the Algonquian folktales and traditional stories, which belong to 35 different Native American tribes from Long Island to California, there is one myth about Glooskap (also known as Gluskap, Gluskabe), a trickster god, a mythic hero who – according to some myths - made the whole world from the body of his own mother." 1 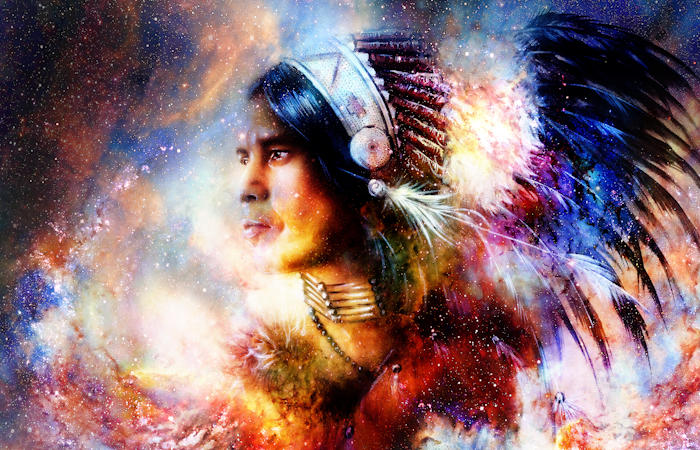 Glooskap was considered the protector of humankind was often fighting his brother Malsum who was a wolf-god. Both Glooskap and Malsmum were creator gods, but the latter was responsible for creating all the evil things of this world that threatened and infuriated human beings.

Glooskap had to do whatever he could to stop Malsum from harming people.

Many Native American myths and legends have different versions of how good must conquer something evil. In a previous article on Ancient Pages, we presented how the Iroquois Tribes explain the birth of good and evil in this world.

There are slightly different versions of the myth, and this time the story is presented as told by Native American David Susick.

The tale begins with how a pregnant woman with twins descended from a higher world and ended up on a turtle.

"Myths and legends from across the world reveal that ancient civilizations had a fascination with turtles and the animal was considered sacred in many parts of the world. The turtle, one of the longest living animals on Earth, was often associated with the Creation of the world.

Native American Indians believed that the Great Spirit created their homeland by placing Earth on the back of a giant turtle. This is why some contemporary Native Americans refer to North America by the name "Turtle Island."

Turtles are a symbol of the Earth in many different Native cultures. To Plains Indians, turtles are associated with long life, protection, and fertility. In some Plains tribes, a newborn girl's umbilical cord was sewn into a figure in the shape of a turtle to ensure her health and safety. In other tribes, turtles are often associated with healing, wisdom, and spirituality." 2

This explains why one often encounters the turtle in so many Native American myths.

Returning to the myth told by the Iroquois Tribes we learn that the women gave birth to two twins who eventually entered a dark world. In the very informative and well-written Algonquin Legends of New England, author Charles Leland writes that one of the boys "possessed a gentle disposition, and was named Enigorio, the Good Mind. The other possessed an insolence of character, and was called Enigonhahetgea; that is, the Bad Mind. 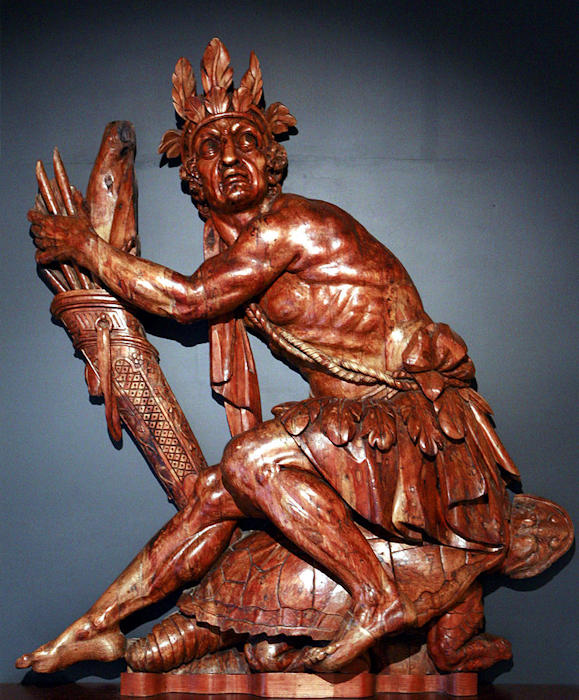 Iroquois Indian sitting on a turtle, in reference to the great turtle that carries the Earth in Iroquois mythology. Credit: Rama - CC BY-SA 2.0 FR

The Good Mind was not content to remain in a dark situation, and was desirous to create a great light in the dark world; but the Bad Mind was desirous that the world should remain in its original state. The Good Mind, determined to prosecute his design, began the work of Creation. Of his mother's head he made the sun, of her body the moon.

After he had made creeks and rivers, animals and fishes, he formed two images of the dust of the ground in his own likeness, male and female, and by his breathing into their nostrils he gave them living souls, and named them ea gwe howe , that is a real people; and he gave the Great Island all the animals—of game for the inheritance of the people....

The Bad Mind, while his brother was making the universe, went through the island, and made numerous high mountains and falls of water and great steeps, and also created reptiles which would be injurious to mankind; but the Good Mind restored the island to its former condition. The Bad Mind made two images of clay in the form of mankind, but while he was giving them existence they became apes. The Good Mind discovered his brother's contrivances, and aided in giving them living souls.

According to some Native American and Pre-Christian beliefs people have two souls. Read more here

Finding that his brother continually thwarted him, the Good Mind admonished him to behave better. The Bad Mind then offered a challenge to his brother, on condition that the victor should rule the universe. The Good Mind was willing.

He falsely mentioned that whipping with flags [bulrushes] would destroy his temporal life, and earnestly solicited his brother to observe the instrument of death, saying that by using deer-horns he would expire. [This is very obscure in Cusick's Indian-English.] On the day appointed the battle began; it lasted for two days; they tore up the trees and mountains; at last the Good Mind gained the victory by using the horns.

The last words uttered by the Bad Mind were that he would have equal power over the souls of mankind after their death, and so sank down to eternal doom and became the Evil Spirit." 3

There are many similarities between this legend and the battle with Lucifer in the Bible. As Leland points out "contrasted with this hardly heathen cosmogony, which shows recent Bible influence throughout, the Algonquin narrative reads like a song from the Edda." 3

Many Native American myths and legends, but naturally far from all, are influenced by the Bible because "Indians did accept stories from the Christian Bible into their oral repertories, with or without accept that the story embody for Christians." 4

Native Americans listened to the Biblical accounts told by the missionaries, but many accounts in the Holy Book made them wonder how such events could have taken place, and "it was clearly in the minds of the Indian that the stories underwent their most striking changes, Protestants and Catholics alike soon learned that, although their native listeners seemed to find the Bible episodes in themselves absorbing, they were generally puzzled or even repelled by certain moral interpretations insisted upon by the Christian narrators." 4