Ellen Lloyd - AncientPages.com - You may have seen the Maneki-neko on several occasions. Statues of the Maneki-neko are sold in various shops, but not everyone is familiar with the legend behind this beloved Japanese good luck charm cat that is raising a paw.

Cats have long been held in high regard in Japan, and these beautiful animals often play an essential role in Japanese folklore and mythological stories. Statues of cats can be seen almost anywhere in Japan, and there are cat statues in temples, parks, shops, private homes, and any place one can imagine. 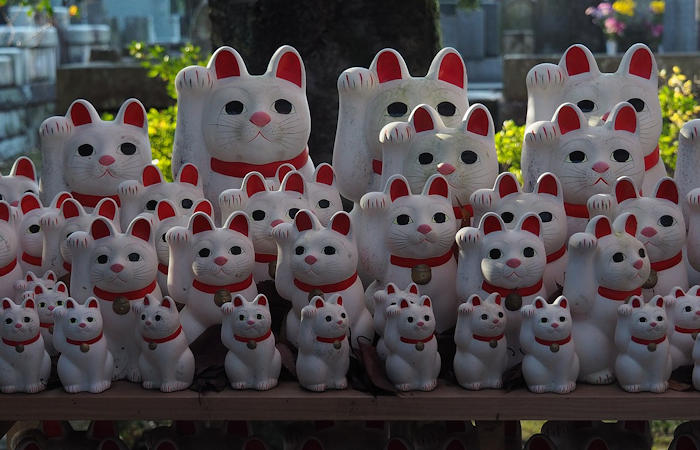 Statues of the Maneki-neko at the Gotokuji Temple. Credit: Laika ac - CC BY-SA 2.0

"In modern Japan, there are cat cafes, cat shrines, cat temples, a cat train station master, and a cat island. Cat day is celebrated on February 22 every year. Japan does cat worship better than any country on Earth.

Cats are said to have arrived in Japan about 1,000 years ago.  Traveling onboard ships carrying Buddhist scriptures that were sailing from China to Japan, cats entered the country and the heart of Japanese people.

Cats were considered guardians of Buddhist scriptures, but they were also troublemakers, and their mischievous deeds like stealing food or destroying things have been a subject of many Japanese folktales. Cat's mysterious nature led to the creation of the Bakeneko, or "cat monster" which is a legendary yokai in Japanese mythology." 1

It is also worth mentioning that "in the mid-19th century, Kabuki actors were suddenly replaced with cats. The government banned pictures of actors and courtesans, considering them detrimental to public morals.

Artists had to find a way to work around the limitations of censorship, and they successfully produced great paintings and prints, giving the actors the look of cats, but enough of their features were left in place. This gave Kabuki fans a chance to recognize the actors even though he had the appearance of a cat." 1

The Maneki-neko produced as a clay toy can often be seen in Tokyo. It was "originally sold at the Gotoku-ji, in Setagaya-ku, Tokyo, a temple with a legend that prosperity and good fortune come to the person who keeps a cat.

From this superstition sprang the belief that the cat summons good luck, and for this reason, clay cats are often placed in homes and shops. A similar cat wearing a haori and hakama is seen at the Kusutama Shrine, in Osaka, where it is believed to bring prosperity in business.

Other cats of this type are produced in many sections of Japan, and though artistically they are not particularly outstanding, they do have a kind of naive charm." 1 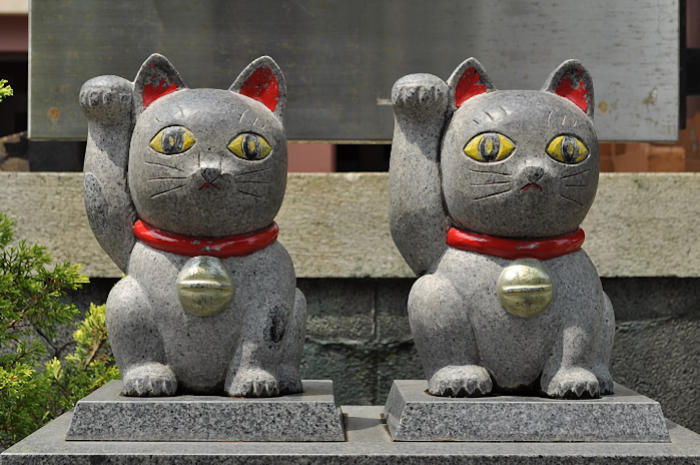 Statues of the Maneki-neko can been in many places. Credit: Wikimedia Commons

The earliest records of Maneki-neko appear in the Bukō nenpyō's, a chronology of Edo entry dated 1852. The cat raising a paw was also mentioned in 1876, during the Meiji era, and later in some newspaper articles.

There are many legends about the Maneki-neko but the most popular one tells a story of how a poor monk in the Gōtoku-ji temple shared his food with a stray cat that one day walked into the temple.

One day, Samurai Ii Naotaka (1590 – 1659) sought shelter from a storm and hid under a tree close to the temple. While standing there he suddenly spotted a cat raising a paw as if trying to say the Samurai should go inside the temple. Ii Naotaka became curious and decided to take a closer look at the cat. As soon as he left the spot under a tree and walked in the cat's direction, a lightning bolt struck and destroyed the tree where he had been sitting. The cat had saved his life, and Ii Naotaka was so thankful that he became the patron of the temple. He invested money in the temple and repaired it to become more spacious. When the beloved cat died, he was buried in a special graveyard for cats.

In the Gōtoku-ji, a statue of the Maneki-neko was made in honor and memory of the wonderful and special cat. The  Maneki-neko has been revered ever since.

Today, many people in Japan keep a statue of the Maneki-neko at home as it is believed the adorable little cat statue will bring good luck to the owner.