Jan Bartek - AncientPages.com - This massive ancient structure, nicknamed the Ukrainian Stonehenge, has many secrets to tell.

According to researchers, this kurgan (burial mound, sacred hill) located near the village of Novooleksandrivka, Dnipropetrovsk Oblast in Ukraine, is more than 5,300-5,500 years old, dating back to the Bronze Age. It is amazing because it means the Ukrainian Stonehenge is older than the Giza pyramids of Egypt. 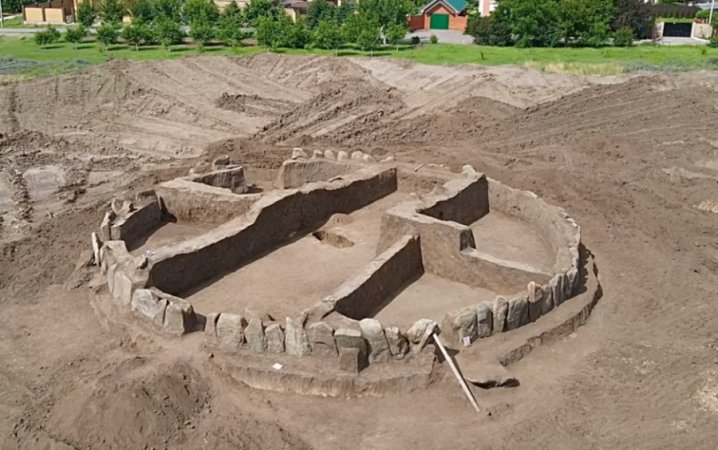 What can the Ukrainian Stonehenge tell us about ancient tribes and Indo-European languages? Credit: Public Domain

Kurgans in Ukraine are in danger of being destroyed. This is a serious problem archaeologists face when excavating these ancient burials that are often filled with historical treasures offering a unique glimpse into the past.

"There are about 100,000 burial mounds dot the fields in Ukraine, but many of them were flattened during the Soviet era. Now, these ancient burials face new dangers from grave robbers and farmers who sometimes also level burial mounds in their fields to ease plowing.

To some, the ancient burial mounds are standing on a piece of land that can be used for building new homes and factories. To others like the group Guardians of the Mounds, the burial mounds of Scythians and other ancient warrior cultures are a cultural and historical legacy that must be preserved. 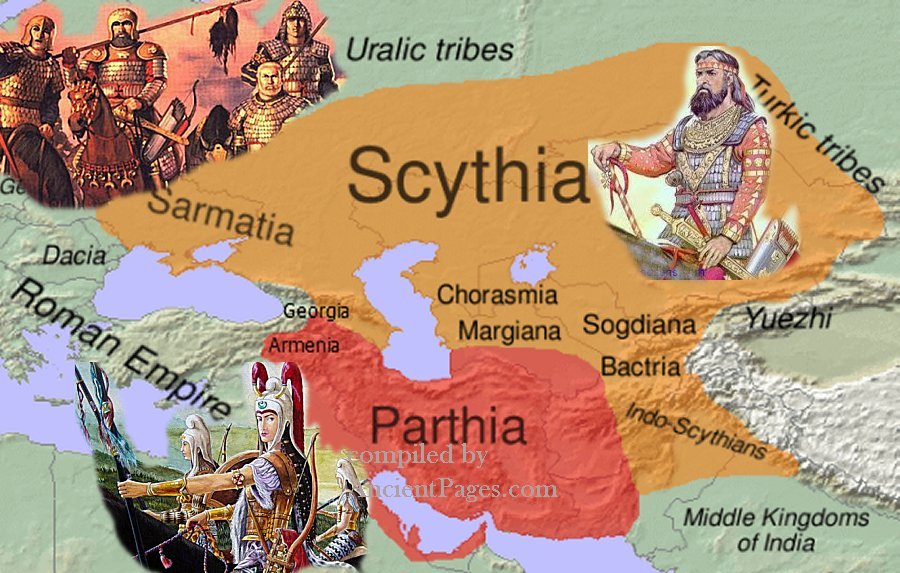 Founded two years ago members of the group Guardians of the Mound fight to save the ancient burials in Ukraine and the history of the Scythian as a cultural legacy." 1

The Ukrainian Stonehenge is a huge ancient structure measuring 7.5 meters in height and 50 meters in width. Like most kurgans is served as a burial place for thousands of years. Experts think chieftains and shamans were buried in this hill.

Why Is The Ukrainian Stonehenge Unique?

According to Dmytro Teslenko, head of the Dnipro Expedition of the Archeological Service of Ukraine the mound is so huge it would be extremely costly and require many workers to complete the structure which is why many people were buried here over a longer period of time. While excavating the kurgan archaeologists uncovered skeletons buried in eleven alcoves, broken jugs and monumental boulders encircling the area.

Inside the kurgans, scientists also uncovered weapons such as battle hammers and clubs, as well as decorated clay pots and wheels that symbolized burial carts. Perhaps the most intriguing and rare discovery was evidence of mummification in one of the ancient burials dating back to the Early Bronze Age. All the internal organs were removed from the body. These are unique archaeological discoveries in Ukraine, and they provide scientists with knowledge about the people's lifestyle and their burial rituals. 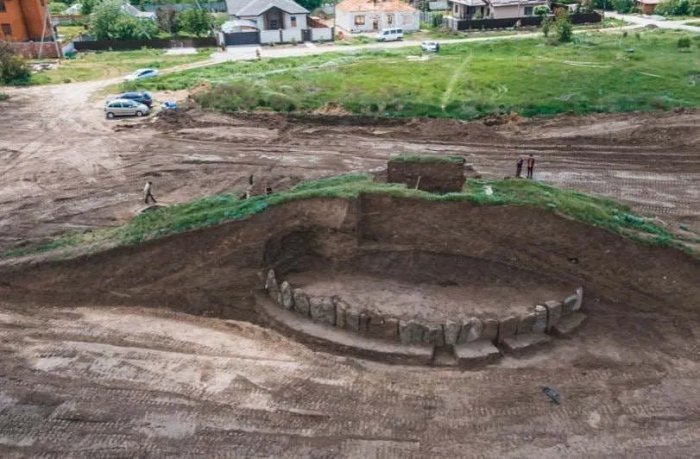 Based on the grave findings, it is evident these ancient tribes believed in the afterlife. Some unearthed skulls are "richly decorated and painted with red ochre (red mineral paint). Red ochre staining was probably a religious ritual, which symbolized continued life after death, and testified to the high status of the deceased." 2

The Ukrainian Stonehenge is a unique ancient construction because ancient tribes "placed enormous stone slabs in a circle, which they adjusted manually in order to strengthen the entire structure. The tombstones were cut by hand and transported to the burial place by water, horse cart or even sleigh in winter." 2

During the excavations, archaeologists uncovered 64 stone boulders, and each of them has its own sacred significance.

According to Yaroslav Yaroshenko, a researcher of the Dnipro Archaeological Expedition, "this cromlech (megalithic construction made of large stone blocks-Ed) has two functions. First, the boulders act as a retaining wall to hold back the soil, and second, they are sacred fences, separating the world of the dead from the world of the living".

The future looks bright for the Ukraine Stonehenge and there is good chance the amazing structure will be preserved for future generations. After the excavations have been completed the site will become an open-air museum. The construction company has offered to cover all necessary expenses. "In turn, local residents have formed a working group and sent an appeal to the Ministry of Culture to maintain the excavated area on the list of memorial sites." 2 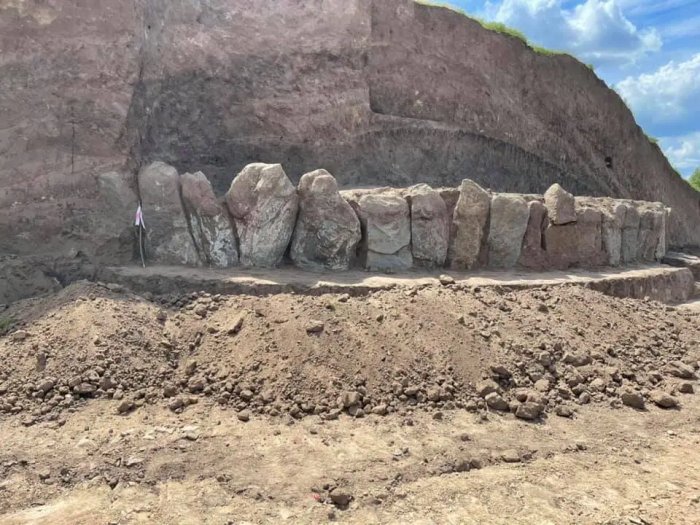 The large and heavy tombstones were cut and transported to the burial. Credit: Oleksandr Kolomiytsev FB

According to Marija Gimbutas (1921 – 1994) a Lithuanian archaeologist and anthropologist known for her research into the Neolithic and Bronze Age cultures of "Old Europe" and for her Kurgan hypothesis, which located the Proto-Indo-European homeland in the Pontic Steppe, "when the Kurgan culture expanded from its homeland in the steppe and forest-steppe of Ukraine and South Russia, it did so in three waves, thus leading to the diffusion of the IE languages." 2 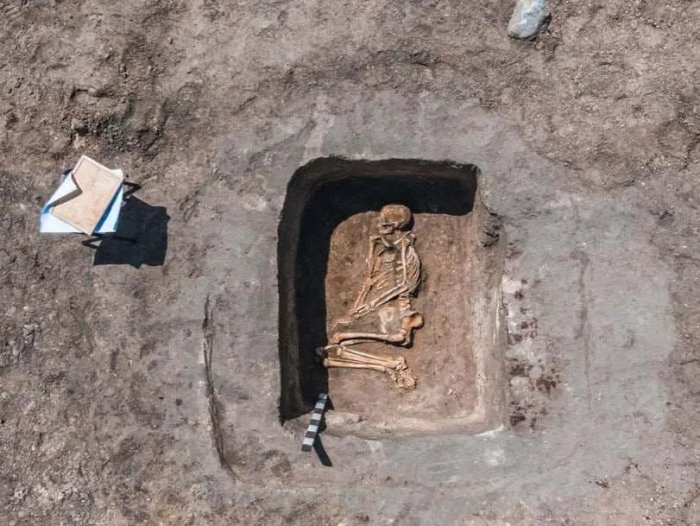 One of the burials. Credit: Public Domain

The Globular Amphorae culture (GAC) "people are regarded by Gimbutas as part of the first wave, associated with the spread of the Yamna culture from the Pontic region to the Danube basin and the Balkans, between 5100 and 4900 BP. If Gimbutas' theory is correct, the people of the GAC should have Yamna related admixture, as well as genetic affinity to the populations associated with later, Bell Beaker culture, documented in many areas of Europe 4800 to 3800 BP." 3

Excavations of the Ukrainian Stonehenge can eventually provide scientists with more clues on how the ancient tribes were related and spread across the region. This archaeological discovery could also shed new light on the mystery of the ancient language PIE from which half of all languages originate.