A.Sutherland  - AncientPages.com - There is a fascinating and entirely different megalithic site known as Namoratunga. The site is located on the west side of Lake Turkana, in northwestern Kenya, and is known as Namoratunga II (or the Kalokol Pillar Site), which means "People of Stone". 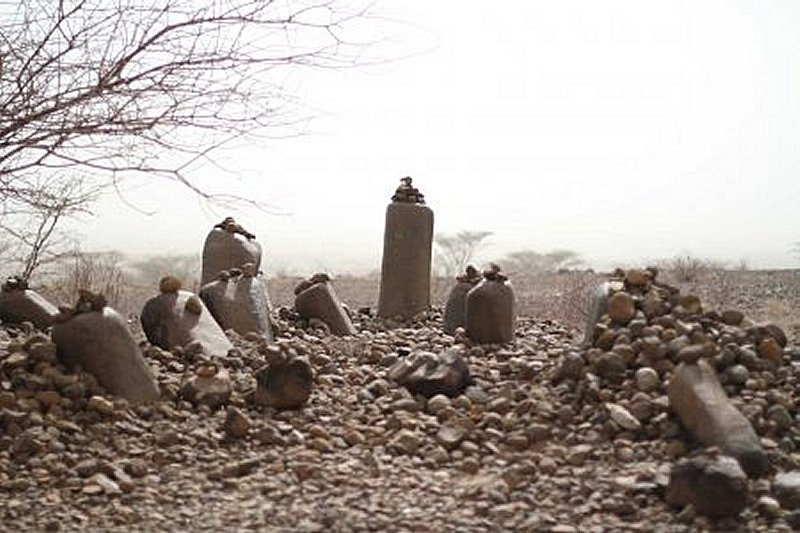 The Kenyan ancient site dates to about 300 BC and it suggests that a prehistoric calendar based on detailed astronomical knowledge was in use in eastern Africa.

According to legend, the pillars (found by the archaeological team in 1978) were once men but became petrified by the devil after failing their test. One story tells about a woman who came one day to the place, and she was dressed strangely, according to the locals. She wanted to dance and told the gathering people no to laugh at her as she dances. But they did and she turned them into stones. Another version of the legend claims that the devil would play a song and anyone who showed any emotions hearing it would be turned into stone.

Local tradition says that the biggest pillar is a chief, who had tried to outwit the devil and in his victory forgot about the ‘no emotion’ rule and smile only for the devil to turn him into stone. The name "Dancing Stones" (Namoratunga, in Turkana language) came from the legend that sheepherders living in the area used to go to the site to dance and sing cradlesongs. 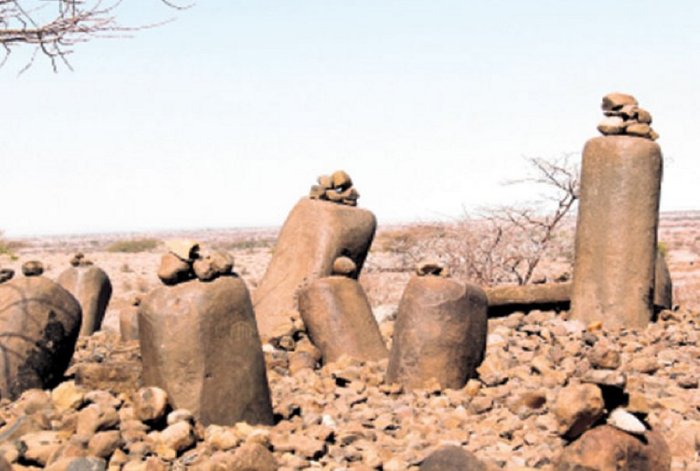 Probably these are only ancient legends regarding the ancient site of Namoratunga, but over the years, the locals have feared the place and never went there. Also, children were warned against going to the site because it was filled with evil spirits.

Radiocarbon analysis dates Namoratunga II and a related burial and rock art discovered approximately 130 miles south at Namoratunga I to 300 BC. (Namoratunga I contains a similar grave but no pillars.)

The site contains 19 magnetic basalt pillars, almost cylindrical in shape, some tilted over, others fallen completely, and all are arranged in rows forming a certain, specific pattern. Each of the pillars has four facets and an inclined top. The pillars are aligned with 7 star systems: Triangulum, Pleiades, Bellatrix, Aldebaran, Central Orion, Saiph, and Sirius, and lean in different directions; their bases are littered with about 20,000 stones. 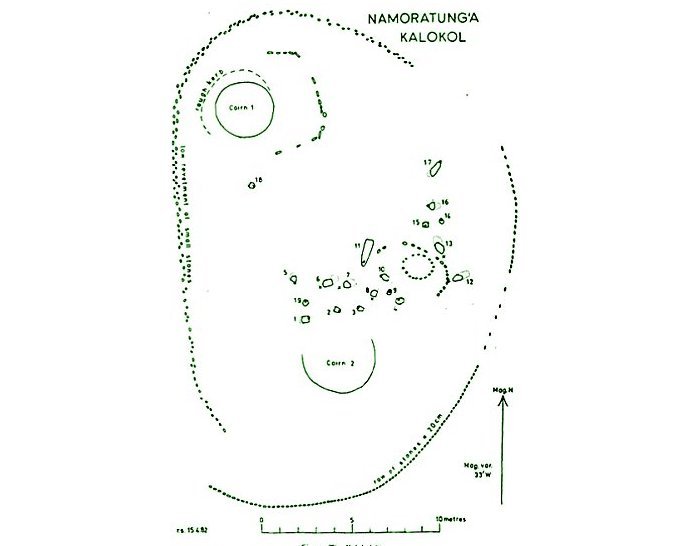 “The burial customs of the sub-Saharan people who used the cemetery resemble what is done today by the Konso, who live in the same general vicinity, in southern Ethiopia. The calendar scheme of peoples related to the Konso may, in turn, help us confirm the intent of the builders of Namoratunga II. At the northern site, one setting of upright stones encircles a grave, like those at Namoratunga I, but the 19 other megaliths at Namoratunga II are arranged in an unusual pattern unconnected with any other burials.” 1

At Namoratunga II, one setting of upright stones encircles an ancient grave, like those at Namoratunga I, according to research conducted in the area by anthropologists at Michigan University, B. M. Lynch and L.H. Robbins. Further, research states that Namoratunga represented an accurate and complex calendar system. The stones are placed relatively close to each other, separated at the most by 35 feet, usually less.

The late Mark Lynch (he died tragically as the victim of a hit-and-run accident in California in 1982) believed that the basalt pillars - surrounded by a circular formation of stones - link the constellations or stars to the 12-month 354-day lunar calendar of Cushitic speakers of southern Ethiopia. 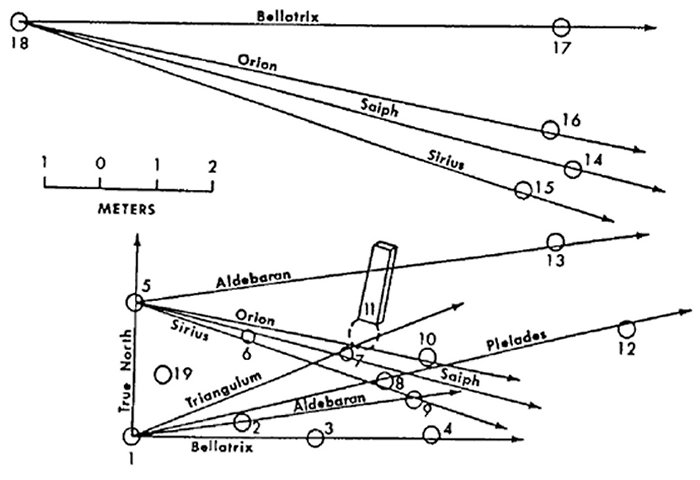 Alignments of the stones indicate the rising positions of bright stars – adapted to calendar keeping by ancient civilizations.

According to researchers, “the positions of key phases of the moon were intricately combined with zones of the sky that correspond to each star or asterism, in order of their use (Triangulum, the Pleiades, Aldebaran, Bellatrix, Orion’s Belt, Saiph, and Sirius). Other months in a complex lunar cycle were coordinated with the position of Triangulum with respect to staggered phases of the waning moon.

The Konso speak a Cushitic language, and it is reasonable to believe the Namoratunga sites were erected by the ancestors of the present-day Eastern Cushities, who still employ a calendar now likely to be at least 7,000 years old. Namoratunga II is a modest site, relatively simple, with little there besides the alignments.

While it could have been used ritually, its layout and the multiplicity of its alignments seem more appropriate for systematic observation. Some of the same astronomical objects observed by the Namoratunga calendar keepers were used more than two millennia earlier by the Egyptian calendar priests. Richard A. Parker, a renowned authority on Egyptian astronomy and calendrics, established that the earliest Egyptian calendar was based on the moon and calibrated by the stars.” 1

It is believed that the Namoratunga sites were erected by the ancestors of the present-day Eastern Cushites, who still live in this region of Africa.