Angela Sutherland  - AncientPages.com –The Kanishka Casket, (also known as the Kanishka reliquary), is a beautiful Buddhist treasure made in gilded copper. The relic dates back to the first year of the reign of the Kushan emperor Kanishka, in 127 AD. 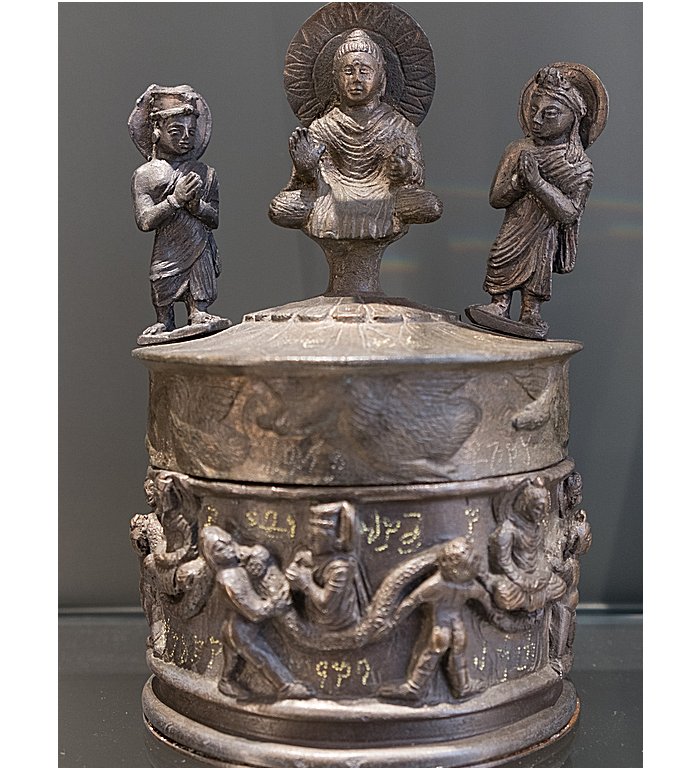 It was discovered in a deposit chamber under the massive Kanishka stupa during British archaeological excavations in 1908 - 1909 in Shah-ji-Dheri on the peripheries of Peshawar, Pakistan. Chinese Buddhist pilgrims described this gigantic structure in the 7th century as the tallest stupa in all India. It was indeed an enormous structure.

The stupa is believed to have influenced later constructions of stupas throughout ancient Turkistan. These wooden towers topped with metal chatras made such buildings act as lightning rods. It was most probably considered dangerous, so this kind of structure gradually disappeared.

No doubt, the Kanishka stupa is a valuable historical and cultural landmark, but so is the Kanishka Casket, which was unearthed with three small bone fragments of Buddha. The bones were transported to Burma by the British following the excavation, where they are still stored.

In Peshawar, Pakistan, the Kanishka stupa has been described as one of the tallest in the world and has been visited by early Chinese Buddhist pilgrims. One of them was Faxian (337 AD – c. 422 AD), a Chinese Buddhist monk and translator who traveled by foot from China to India, visiting sacred Buddhist sites. 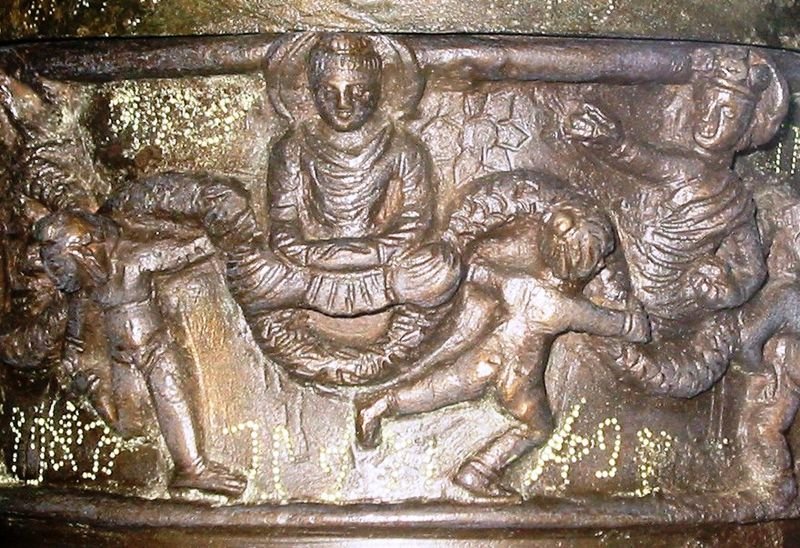 Detail of the Buddha, surrounded by cherubs, with devotee or bodhisattva. Image source

As for the Kanishka Casket, the artifact (just over 19 cm and a diameter about 10 cm) is now in the Peshawar Museum, Peshawar,  and the British Museum has its copy.

The casket is dedicated in Kharoshthi script, an ancient Indian script used in Gandhara (now Pakistan and north-eastern Afghanistan) to write Gandhari Prakrit and Sanskrit. The script was also used in Central Asia.

"In Kanishkapura city, this incense box is the great king Kanishka's monastery's superintendents of construction of the fire hall, Mahasena's and Samgharakshita's, donation.

May it be for the benefit and pleasure of all living beings. In possession of the Sarvastivadin teachers."

Originally it was long believed that the text is signed by a Greek artist named Agesilas, who oversaw work at Kanishka's stupas ('caitya'), confirming the direct involvement of Greeks with Buddhist realizations at such a late date: 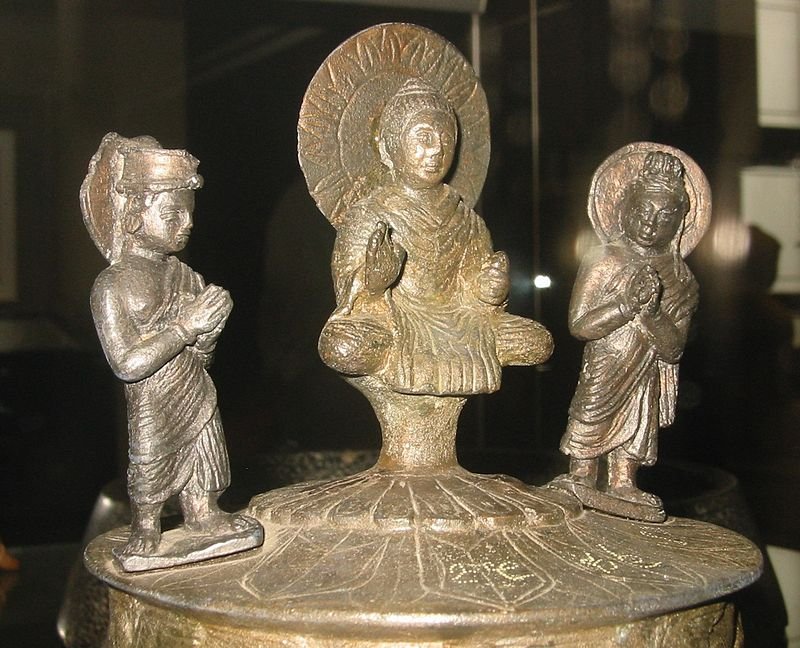 However, recent cleaning of the Kanishka Casket revealed that the old reading of the inscription was not accurate. Instead, the name is to be read 'agnisala' (instead of for 'Agisalaos'), and refers to the monastery and not a person.

The lid of the casket depicts the Buddha on a lotus pedestal and worshipped by Brahma and Indra.

"On the body of the casket, there is a standing figure of a man in Kushana costume and a row of small, active naked figures carrying a garland. In its swags appear other figures, either half-length or composed in the attitude of meditation". 1

The edge of the lid is decorated by a frieze of flying geese, or hamsa used in Hinduism and Buddhism, as a symbol of protection against the evil eye and the symbol representing the interplay of the body's body chakras, the concept found in the early traditions of Hinduism. The 'hamsa' also means the travel of departing souls and the removal from samsara (the idea of rebirth and "life, matter, existence," all moving in cycles), a fundamental belief of most Indian religions.

The body of the casket represents a Kushan monarch, probably Kanishka in person, with the Iranian Sun god and Moon god at his side. On the sides are two images of a seated Buddha, worshiped a royal figure, possibly a bodhisattva (one who can reach nirvana but delays doing so through compassion for suffering beings.)

Kanishka (or Kanishka the Great) was an emperor of the Kushan dynasty in the second century (c. 127–150 CE). He is famous and still remembered for his military, political, and spiritual achievements. His native language is unknown.

Loeschner Hans, “The Stūpa of the Kushan Emperor Kanishka the Great”