Angela Sutherland  - AncientPages.com -  Many spectacular structures of antiquity, such as the pyramids, temples of Luxor and Karnak, Ramesseum, Abu Simbel, and others, attest to ancient Egypt's superior civilization.

One of them is Abu Simbel, now an archaeological site located in Muhafaz Aswan, on the West Bank of the Nile, in southern Egypt, close to the border with Sudan. 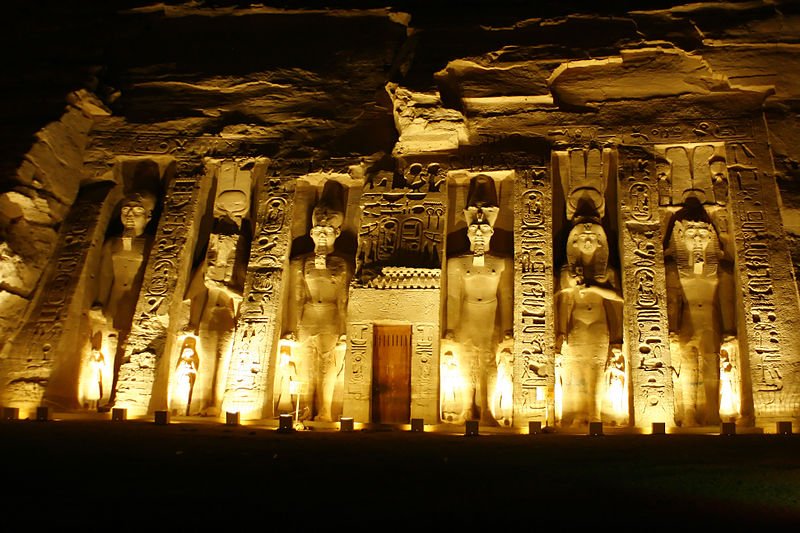 Built between 1264-1244 BC (or 1244-1224 BC) during the reign of Pharaoh Ramesses II, Abu Simbel represents a vast complex of two prominent temples reaching 56 m deep into the rock.

It took twenty years to carve out the temples of a solid mountainside on the West Bank of the Nile, in Lower Nubia, close to the border with Sudan. One of the temples celebrates Ramses II's victory over the Hittite Empire at the Battle of Kadesh in 1274 BC. The other commemorates the pharaoh's love for his favorite queen, Nefertari.

The entrance of the Great Temple is guarded by four (20 m high) giant statues representing Ramesses II seated on a throne and wearing the double crown of Upper and Lower Egypt. Inside, there are additionally eight more of his sculptures. The statues of the king and his queen are about 10 m (33 ft) high.

Next to Ramesses's legs are some other, smaller statues depicting: his chief wife, Nefertari, his queen mother Mut-Tuy (Tuya), his first two sons, six daughters. The temple is dedicated to the pharaoh himself and the sun gods  Amon-Ra, and Ptah, the god of arts and crafts, and Ra-Horakty, the god of the "morning sun." 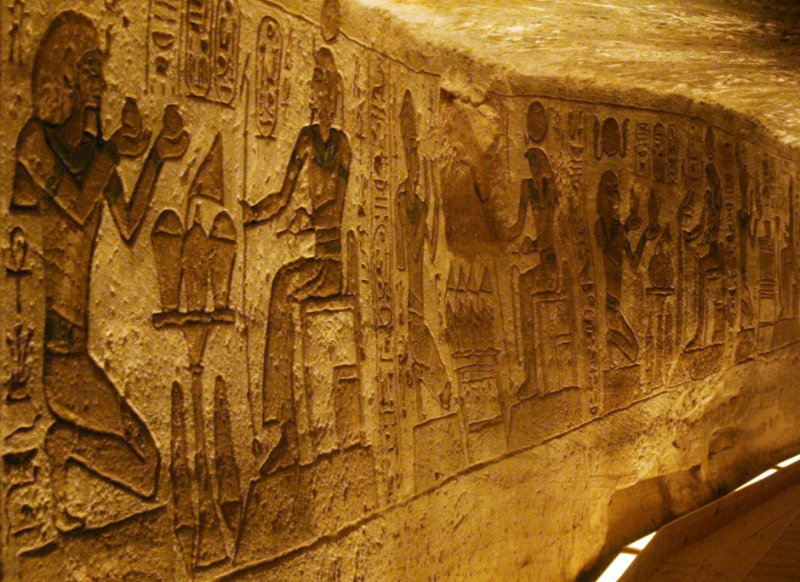 Without a doubt, the temples are unique in both design and size.

The decorations inside the first chamber are reliefs commemorating the battles of Ramesses II at the Battle of Kadesh.

"The walls of the halls are covered with superbly preserved reliefs showing Ramesses conquering his enemies in the mighty battle of Kadesh that he fought in his fifth year as king. Almost 1500 figures of soldiers are carved and painted here. Side chambers off the hall were perhaps store chambers for the temple's wealth." 1

There are also images of the deities to whom the temple was dedicated and of Ramesses II himself. In addition, the rooms are decorated with precious paintings and reliefs.

The Small Temple honors Hathor, the goddess of love and beauty, and Queen Nefertari, Ramesses' favorite wife. The statues of Nefertari - equal in height to her husband's figures - attest to the great respect that Ramses II gave to her.

Six huge statues (10 m (33 ft) high) decorate the facade of this temple. Two of them depict the queen are placed between four others, representing Ramesses II. 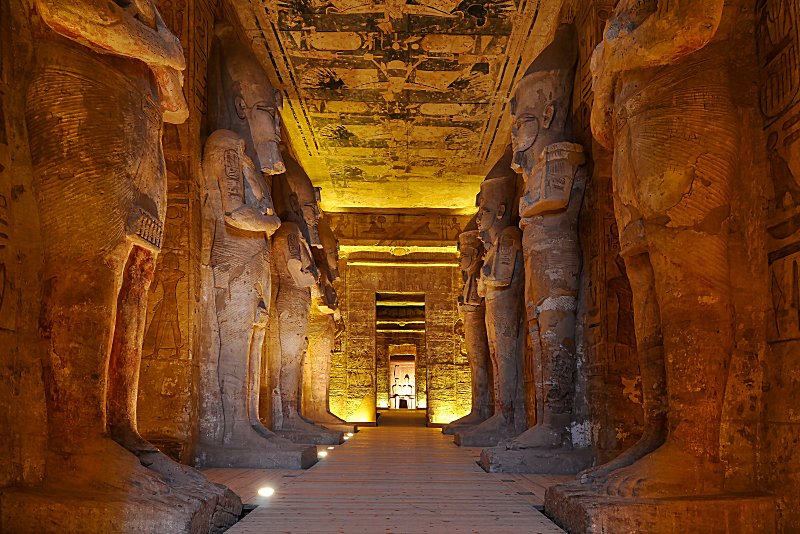 Built by Pharaoh Ramses II, these two structures unquestionably testify to the outstanding building achievements of this ruler and his power as the king.  Ramses wanted to show the power of ancient Egypt to the newcomers from Nubia.

Phenomenon Associated With The Great Temple In Abu Simbel

A beautiful phenomenon associated with the Great Temple occurs twice a year, initially on February 19 and October 21. The rising sun illuminates the image of Amun-Ra and Ramesses II, and after some time, also Re-horachty. Interestingly, only the depiction of Ptah is never illuminated by the rays of the sun. After the transfer of the temple, the phenomenon was still preserved, although postponed by one day.

With time, the marvelous work of Pharaoh Ramses II has been forgotten and covered by sand.  In March 1813, the Swiss traveler Johann Ludwig Burckhardt (1784 – 1817) stumbled upon the sand-covered ruins of the Great Temple of Ramesses II at Abu Simbel. He made attempts to excavate the entrance to the temple, but he failed.  He later told his friend Giovanni Battista Belzoni about the ruins, and it was he who later returned in 1817 to excavate the temple.

In 1964, the salvage of the Abu Simbel temples began. These historical landmarks (along with some others) were under threat from the rising waters of the Nile due to the construction of the Aswan High Dam.

It was decided that the structures needed to be moved. The most ambitious project was to be the lifting of the temples of Abu Simbel. 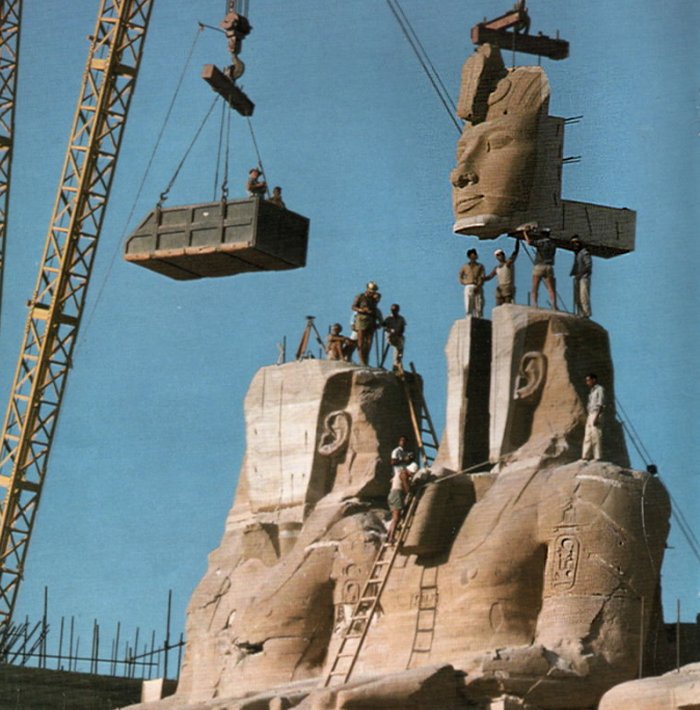 The statue of Ramses the Great at the Great Temple of Abu Simbel is reassembled after having been moved in 1967 to save it from being flooded. Source

All involved in the project had to transport the temples and reassemble them in a safe place, located about 65 m higher than its previous location. Then, the hard work began at the site. Engineers, archaeologists, and ordinary workers, equipped with heavy lifting and cutting equipment, reached Nubia. Soon, 807 meters of blocks from the main temple and 235 meters from the smaller ones, and almost 7000 blocks of rock framing both Abu Simbel temples, were transported to the prepared warehouse.

In the meantime, the temples' original place had already been flooded.

The project was both extensive and challenging to carry out, but the valuable landmarks of the country were saved. The cost of the operation was approximately $ 36 million. The temples were included in the UNESCO World Heritage list in 1979.