A. Sutherland  - AncientPages.com - Meteora, (means in Greek:" raised from the ground, hanging") and the ancient monasteries built atop the Meteora massif represent a magnificent place that does seem to hang in the sky.

The Meteora massif, located on the northwest edge of the Thessaly Plain near the Pindus Mountains in central Greece, is a sandstone rock formation rising over 600 meters above sea level. The rock owes its unique appearance to beautiful and strange rock pillars and columns of different shapes. 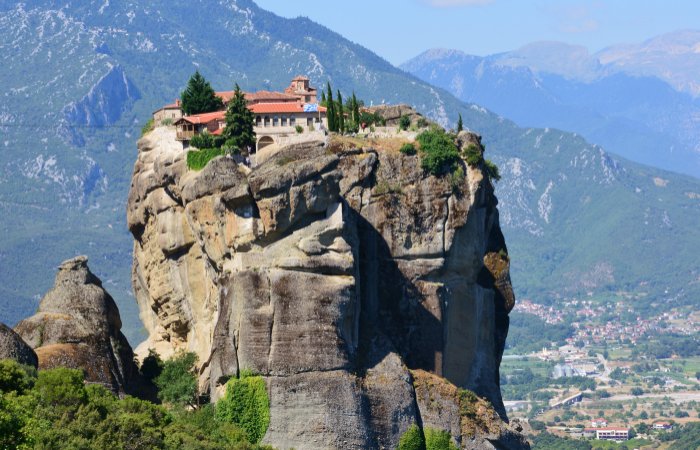 The process that created the Meteora outcroppings is not precisely explained. Still, it is known that about 60 million years ago, a series of earth movements pushed the seabed upward, forming a high plateau.

The colossal rock pillars emerged in the thick layer of sandstone under the influence of the weathering processes.

Several hundred years ago, ancient human hands built Greek monasteries on their tops. The monasteries became a "meeting places of God with man. To date, only 6 of the 24 buildings have been preserved in a condition that allows living and visiting them.

The monasteries (today, there are only six of them) are all in Meteora and date back to the 14th, 15th, and 16th centuries. For nearly a thousand years, spiritual seekers and others isolated from other people and self-disciplined individuals have climbed atop the massive high platforms of stone that rise to the clouds.

Until today, these people seek the Meteora's high places to link their lives to the divine. It's a sanctuary of harmony and quietness that can be found in the region of Thessaly (an ancient Aeolia) mentioned in Homer's Odyssey.

The weather conditions often permit us to experience something extraordinary up there, especially when clouds fill the valley of the Pineios River below. The tips of the mountains seem to float on top of the fog like ships in a harbor. 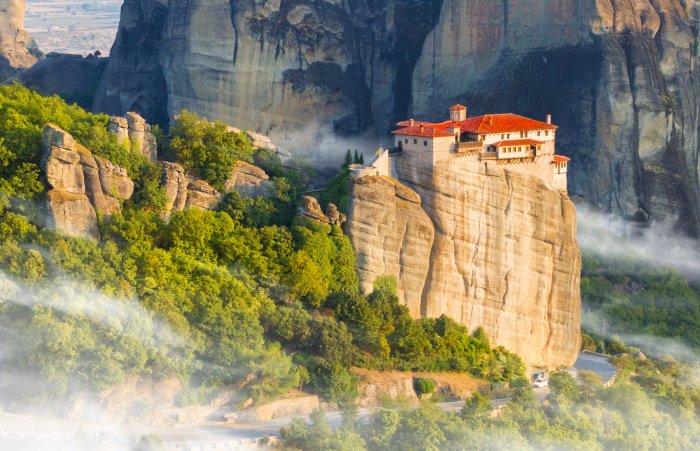 Humans moved in around the Meteora massif probably 50,000 years ago, and also caves in its vicinity were inhabited uninterruptedly between 50,000 and 5,000 years ago.

One of the caves is known as the cave of Theopetra, inhabited by humans 130,000 years ago. At this site, there is also the oldest known example of a built structure -  a stone wall that blocked two-thirds of the entrance to the Theopetra cave. It was constructed 23,000 years ago, probably as a protection against extreme winds when the planet Earth was experiencing an ice age at the time, and the caves were good shelters.

Building the first Orthodox monasteries dates to the 14th century, but persons who live in seclusion (the Hermits) had already earlier inhabited caves of Meteora at the end of the 11th century.

For several hundred years, access to the monasteries was very limited. Until the 1920s, the only way up to the monastery was using special nets and baskets suspended on ropes for transporting people, food, and materials necessary for the construction and repair of monasteries.

It took time until steps were built into the rock.

The monks living in the monasteries experienced a period of splendor in the 16th century when Suleiman I (1494 -1566) (known as Suleiman the Magnificent) ruled the Ottoman Empire. Having learned about the monasteries located on high rocks of Meteora, the sultan ordered to deposit most of the riches looted during the wars. So, the monks lived in 'the Sultan's Treasury' and significantly improved their living conditions, and apparently, they did not oppose the occupation.

The largest and highest located monastery of Meteora is ‘Megalo Meteoro’. Today the monastery is reached by one-hundred-fifteen stone steps, was built in the 14th century at a height of 534 meters above sea level.
Like other Meteora monasteries, also the ‘Megalo Meteoro’ was devastated during the Second World War and the German bombing. Recently, it was renovated and the structure is now added to the historical museum located in the sanctuary’s interior. Inside, there is a monastic Ossuary, (or the so-called skull chapel), which contains the bones of all monks living in monasteries.