Willow Winsham - AncientPages.com - There is nothing more calming than sitting beside a nice stretch of water, gazing out into the distance and letting your mind be soothed by the sounds of sea, lake or river. But there are hidden dangers lurking in the depths just a breath away, waiting to pounce on the unwary. Here are some of the most terrifying beings that reside in the waters of the world.

There were many dangers for sailors in the ancient world to contend with, but none quite so lethal as the exquisitely voiced sirens of Greek mythology.  These half-woman, half-bird creatures were known for their beautiful singing, but beware: they used this gift to lure the unwary towards the rocks, dashing ships and dragging men down to the depths to meet their watery deaths. It was said that victims went willingly, desperate to be with the sweet-voiced maidens. It was said that their singing was so irresistible that no one could escape their charms; notably, Odysseus was a rare exception: Homer’s hero lashed himself to the mast to avoid leaping to his fate to become another victim. 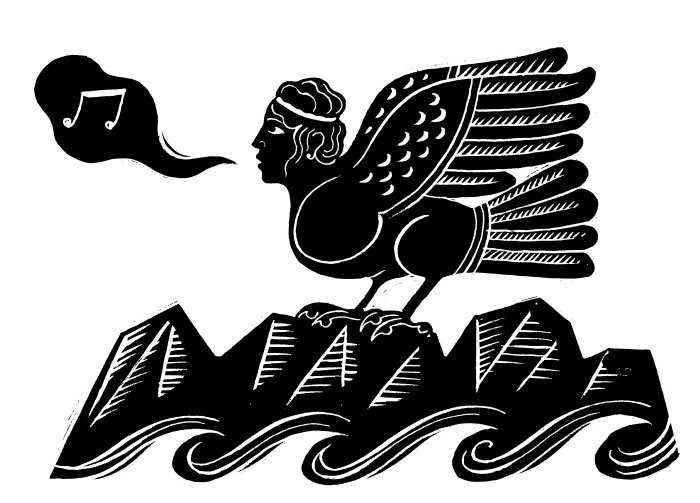 According to Homer there were two sirens, but other sources mention the existence of as many as five of these deadly creatures. Although originally they were not known for their good looks, as time went on, sirens came to be depicted with looks to match their voices, their temptations therefore magnified.

Where did sirens come from? Again their origins vary from source to source, but they tend to be claimed as the daughters of one god or another, with the sea god Phorcys or river god Achelous both being contenders. Angels or women who stray from the path of righteousness were also linked with sirens, and were said to be doomed to become one on the Day of Judgement.

One of Canada’s most famous lake monsters, Ogopogo is said to reside in the Okanagan Lake in British Columbia. Now firmly entrenched in Canadian folklore, there have been many purported sightings of the monster, and “Oggy” as it is often affectionately referred to is often depicted as a serpent-like creature akin to the Loch Ness Monster. 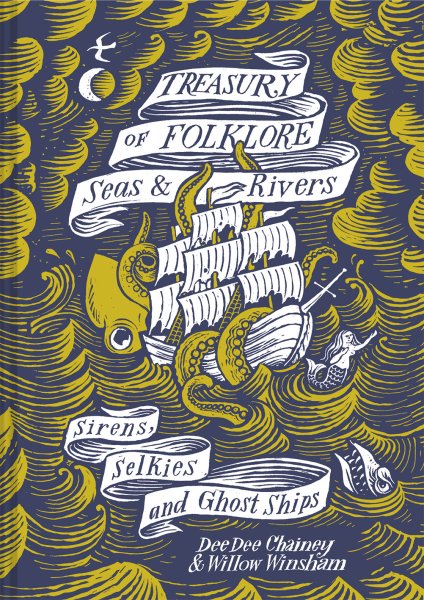 A beautiful and enthralling collection of folkore of the sea, rivers, and lakes from around the world.

Folklore of the sea and rivers has a resonance in cultures all over the world. Watery hopes, fears, and dreams are shared by all peoples where rivers flow and waves crash. From English sailor superstitions to shapeshifting pink dolphins of the Amazon, from monsters of the deep, to Scylla and Charybdis and waterfall folklore. The book covers the tales of the bunyip from Australian billabongs, the water horses of the Scottish lochs, and the monstrous mhalla that lurk in Maltese wells. It isn't all rooted in the past—they also tell modern-day urban legends such as the ghost passengers that appeared in Japan after the 2011 tsunami. In this beautifully illustrated book with stunning woodcuts, authors Dee Dee Chainey and Willow Winsham tell tales of mermaids, selkies, and sirens; of ghostly ships, the fountains of youth, and the demigod Maui. Read more

There have been many attempts to capture the monster on film, but these have usually been debunked, with otters, beavers, birds or even logs in the water proving to be the real culprit.

Although a monster has been linked to the lake for some time, the name Ogopogo is a relatively modern addition to the legend, said to come from a music hall song in 1924.

It is believed that the origin of Ogopogo actually comes from the Salish N’ha-a-itk, the First Nations spirit of the lake. It is said that this spirit, residing in the lake, was paid tributes of live chickens and other small animals to ensure a safe crossing. These offerings were killed and then dropped into the water before a journey was made.

This phantom ship of Chilote folklore is enough to strike fear into the staunchest of hearts. Said to frequent the waters around Chiloé, the series of islands off the coast of Chile, the Caleuche has been sighted since the arrival of the Spanish there in the mid 16th century.

According to legend, the ship appears at night, enticing people closer with music and lights; far from a terrifying sight, the Caleuche is a veritable party ship. All is not as it seems, however, as the ship is manned by powerful witches and wizards and the souls of those who have perished at sea. Those who witness the ship are in great danger; those who see it are often taken onboard where they are trapped forever. Some are left behind, but are unable to speak, robbed of their sanity. 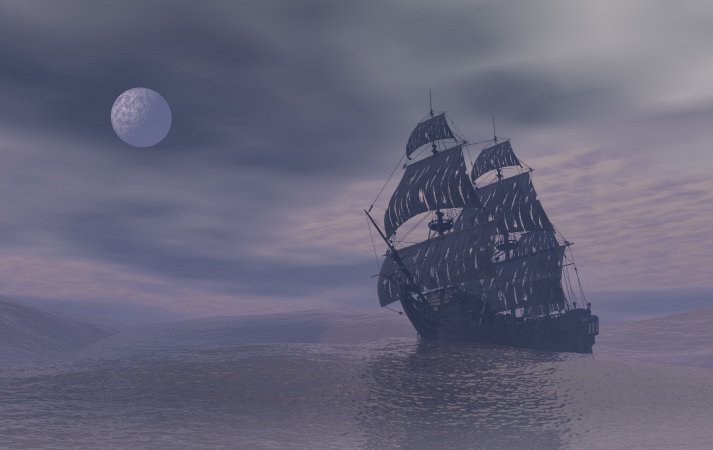 There is another, less terrifying, aspect to the Caleuche however. Those aboard the ship are free from the pains and sickness of their earthly lives, free to enjoy the celebrations there forever. The phantom ship therefore acts as an afterlife narrative which brings comfort to those who have lost loved ones to the waves.

Portrayed as Davy Jones’ monstrous pet in the 2006 film Pirates of the Caribbean: Dead Man’s Chest, the Kraken has been a feature of Scandinavian folklore for centuries. Squid-like in appearance, this terrible sea-beast is said to terrorize sailors who dare to pass through the Kraken’s waters, waiting to drag the unwary to a watery death below. 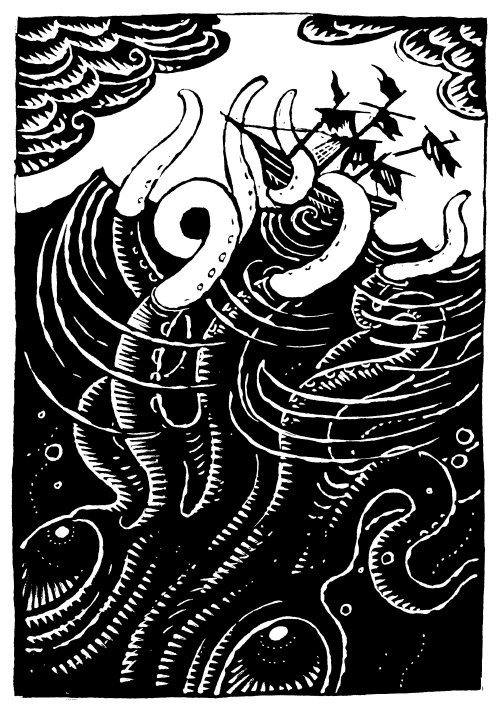 According to an 18th century description of the Kraken, at first glance, the creature resembled a series of small islands in the water, surrounded by seaweed. This illusion was soon dispelled, as the monster emerged: round and flat, with its back measuring a staggering 2.5km in circumference, the kraken boasted long, powerful arms that were as tall as a ship’s mast, waiting, concealed beneath the water. Without warning, these great tentacles rose up, grabbing anything that got in their path.

Despite its terrifying nature, fishermen prize the Kraken, as its appearance heralds a great supply of fish. They soon learn to be wary however and make a quick get away, as when the Kraken returns to its watery home, whirlpools drag everything within reach down with it.

These vengeful spirits from Japanese folklore are all that remains of sailors who have drowned. Angry and bitter at losing their lives, they are out to take revenge on others out at sea. They approach the unsuspecting, before ladling water into their boats. When they get too full they sink, drowning those inside. 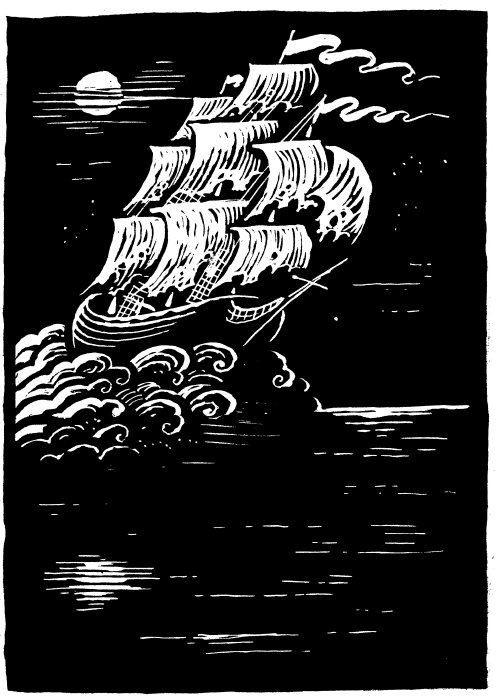 According to legend, Funayūrei have various appearances, said to appear as ghosts, ghost ships or ghostly lights. Although tales often speak of them appearing at sea, sailors are not safe in other types of water, as they have also been said to be found in lakes, rivers, and even swamps.

Any sensible person would not venture onto the water without some onigiri, or rice balls. When thrown into the water, they offer protection from these vengeful spirits. Forgotten your onigiri? All is not lost; a hishaku – water ladle – with a missing bottom will also bring protection.

Hungry for more? Uncover a whole world of watery folklore in Treasury of Folklore: Seas and Rivers by Dee Dee Chainey and Willow Winsham, published by Batsford. Illustrations by Joe McLaren. Available to buy from Amazon.co.uk and Amazon.com

Willow Winsham - is an historian of witchcraft, specialising in English witchcraft cases. She is author of Accused: British Witches Throughout History and England's Witchcraft Trials from Pen and Sword Books. She is co-founder of #FolkloreThursday, a popular website and Twitter account that brings fascinating tales and traditions from all corners of the globe to its followers every Thursday.