A. Sutherland  - AncientPages.com - In the Prose Edda book "Gylfaginning," an Icelandic historian, poet, and politician, Snorri Sturluson (1179-1241) described the goddess Lofn, who "let people live together, women and men, even if previously it was for them forbidden or considered illegal" to be together. 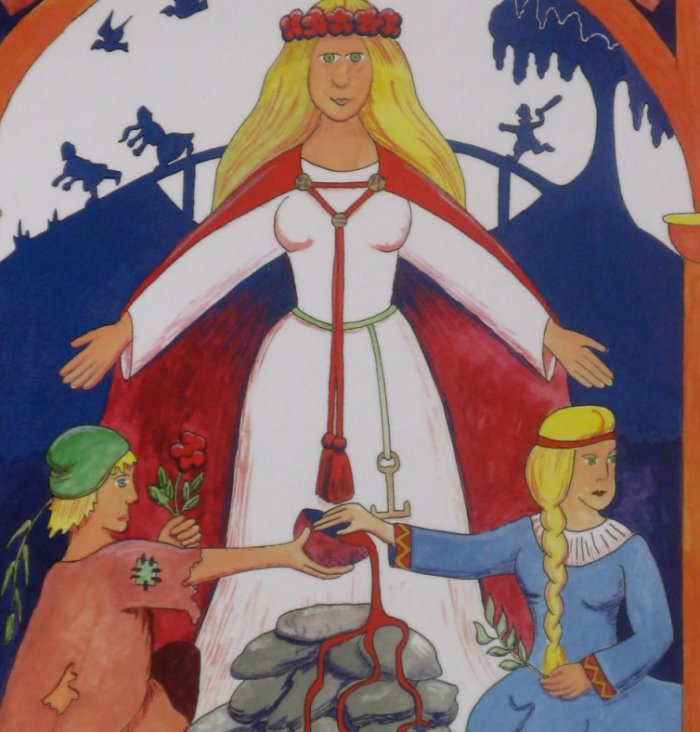 In Norse mythology, Lofn is a minor deity. Although she was not of great significance in the pantheon, she was important to people who wished to be loved and searched for love and partners.  Lofn was great support for those who desperately needed her help.

The goddess of passionate love, Lofn, (also Lofna), whose name means 'love' or 'praise,' was a female of the Æsir gods and one of the Asynjur of the goddess Frigg, who was the most prominent among the holy sisterhood of Asynjur was Frigg, Odin's wife and the goddess of love, marriage, and motherhood.

Appreciated for her goodwill and kindness, Lofn was "good to pray to" when marriage was a controversial issue. The gentle and gracious and good maiden Lofn had permission from Odin or Frigg to bring together men and women, no matter what difficulties may stand in their way. If there any obvious obstacles, Lofn had the power to remove them.

The name "love" was associated with Lofn's name, and this name was much loved and respected by men and women who lived on Midgard (or Mannheim), one of the nine worlds of Yggdrasil, the sacred tree of life in Norse mythology.

Men and women who were not allowed to marry each other could indeed rely on the divine Lofn, who in Snorri's catalog in "Gylfaginning" is listed as the eighth of 16 (or 14) Asynjur.

As we mentioned earlier, Lofn was only a minor goddess, but it does not mean she was not of value, especially to ordinary people. In Norse skaldic poetry of the 9th to the 13th century), Lofn's name was mentioned frequently.

Frigg is the first; she possesses the right lordly dwelling, which is called Fensaler.

Other Asynjur are: Saga ('a seeress'), probably another name of Frigg; Eir, who is a goddess of medicine and medical care; Gefjon, associated with plowing; Fulla, who carries Frigg's chest, takes care of her shoes and knows her secrets; the goddess Freya, who is ranked with Frigg. Another attendant of Frigg is Sjöfn, who is fond of turning men's and women's hearts to love, and like Lofn, she also cares for marriages and matchmaking, but most probably, this goddess can be the goddess Frigg herself.

Among other Asynjur, there is also the goddess Var, whose duty is to hear the oaths and troths that men and women plight to each other. She takes vengeance on those who break their promises.

In Norse mythology, Vör (in Old Norse, possibly "the careful one") is a goddess associated with wisdom. Vör is also attested in the Prose Edda, among Frigg's Asynjur.

Meanwhile, Syn is the deity who guards the hall door and closes it against those who cannot enter. In trials, she is invoked when necessary by the defenders.

The duty of the goddess Hlin is to guard those men whom Frigg wants to protect from any danger, while Snotra is the one who is wise and courtly. Another attendant is Gna, Frigg's envoy whom Frigg sends on her errands into various worlds. Snorri Sturluson's list also includes Skadi, the wife of Njord

A few of the Asynjur are well known in their own right, and most of them are mentioned in various Norse myths.

Anderson R. B. Viking Tales of the North