Ellen Lloyd - AncientPages.com - Ancient people left behind many structures and carvings that intrigue us, but it’s not always clear who made what, when, and why.

In North America, there are so many ancient mounds that hold vital clues to the past, but when trying to unravel some of their secrets we are often left with speculations and little facts. Perhaps that is what makes these ancient structures so interesting to us.

When investigating ancient mounds in North America archaeologists are often told by Native American tribes these structures are sacred to them, but they were not built by their people. Natives say these mounds have been there long before the Indians came to the area. 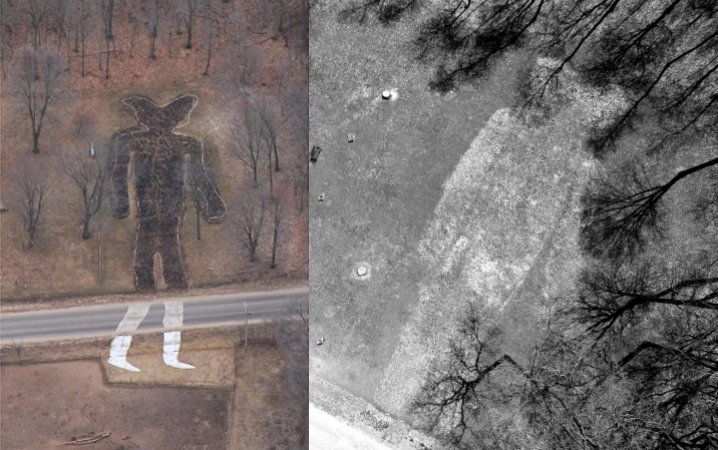 Who was the giant with horns and who were the people who made him? Left: Credit: Sauk County Wisconsin - Right: Credit: wiscnews

If the mounds were not built by Native Americans, then whose work are the effigy mounds? Are they the legacy of a long-lost ancient race we know basically nothing about?

Unfortunately study of the effigy mounds has been difficult because hundreds of the structures were deliberately destroyed when settlers moved into the region, but there are still some mounds that are as eye-catching as mysterious.

One of them is located in a tiny county park four miles northeast of Baraboo, Wisconsin. What makes this particular structure unique is the fact it’s the only surviving example of an anthropomorphic effigy mound. There were once five such mounds, but now we can only admire one.

Who made the prehistoric humanoid earthwork? What purpose did it serve? “Many who have written upon this subject, view these antiquities collectively as cemeteries; they suppose that when a location for sepulchral purposes was selected, the grounds in the vicinity were held sacred; that in constructing these tumuli, the material was brought from a distance, or collected in such a manner as to exhibit no indications of the adjacent soil having been removed; and as from the nature of the structure a constant disintegration took place, posterity were enjoined, as they wandered to and from, to add earth to the heap;  - and they believe that by such means these monuments gradually rose into existence.

It’s very evident that these works were heaped up by a race that has long since passed away; as to the material of which they are constructed having been brought from a distance, we have no other testimony than conjecture.” 1

This is what we learn from an old historical document published in the American Journal of Science.

Today, scientists believe the Man Mound was constructed around 1000 A.D., about the time Leif Erikson sailed to America. The mound depicts a horned humanoid figure which has led to some speculations it was made in the image of a Viking, but they did not wear horned helmets.

It’s possible the two horns, may have been part of a ceremonial headdress. Could this be a depiction of an ancient shaman, or was it a god? 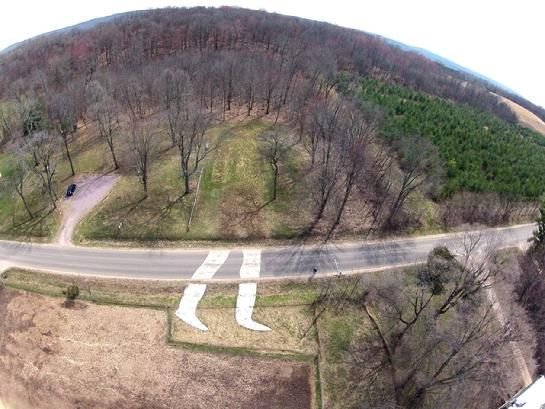 The humanoid was originally was 214 feet (65 m) long and raised 2.5 feet (0.76 m) from the ground. Sadly, the legs and feet of the figure were destroyed by the construction of Man Mound Road and a cow pasture across the road, leaving the modern mound roughly 50 feet (15 m) shorter than its original length.

The giant humanoid is not so impressive when you study him from the ground, especially since the missing legs have had to be painted onto the road, but the sight of him from the air is quite remarkable.

The true identity of the humanoid giant in Wisconsin will probably never be revealed, but the effigy mound is of enormous historical importance which is why it was added to the National Register of Historic Places in 1978 and designated as a National Historic Landmark in  2016.