Ellen Lloyd - AncientPages.com - Everything went wrong from the day the stranger knocked on the door. Nothing was ever the same after his arrival, but what did really happen, and what was the frightening voice people heard? Where did it come from? Whom did it belong to?

As always when historical events turn into a legend, it becomes difficult to determine how much of this story is true, but Rev. Alfred E. Smith editor-in-chief of the Catholic Review and secretary to Cardinal Gibbons said this incident was the “the truest ghost story ever told.” 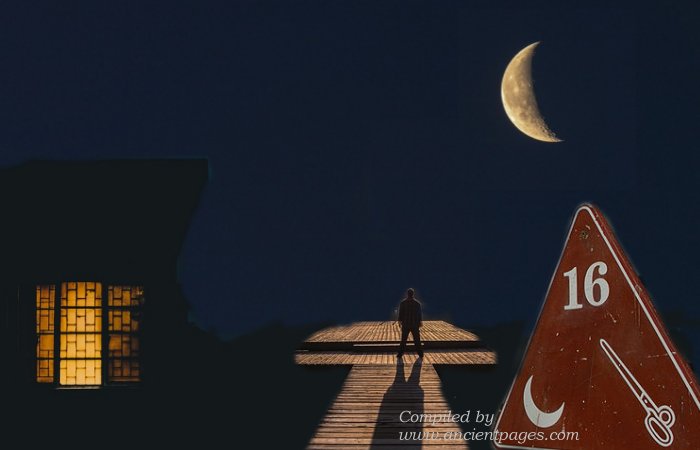 Were people in West Virginia really confronted with supernatural phenomena?  Some are still convinced this was the case and they avoid talking about the incident.

A Stranger Comes To Middleway

As the story goes everything started in 1794 when a traveler came to the house of a former Pennsylvanian named Adam Livingston. This was in those days when Virginia was still being settled, and before West Virginia had become its own state. The stranger stayed with Livingston but after just a couple of days his condition deteriorated, and it was evident he was dying.

Lying on his bed, the traveler whose name still remains unknown asked Livingston to send a Catholic priest who could offer his spiritual services, but Livingston who was an intolerant member of the Lutheran church refused and declared “that he knew of no priest in that neighborhood, and if there was one, he should never pass the threshold of his door.”

The dying man who was a Catholic repeated his request several times, but no priest came, and finally, he died in Livingstone’s house.

That is when hell broke out, in a manner of speaking. Before moving to Middleway in West Virginia, Livingstone had owned a large area of land in Pennsylvania. However, according to The Mystery of the Wizard Clip, a published account from 1949, for unknown reasons, his property experienced a number of disasters. Not only did his cattle die but his barn was burned to the ground. Livingstone, his wife, three sons, and four daughters needed a fresh start, so they moved to West Virginia. Soon Livingstone gained a reputation of being an honest, hardworking farmer and he may have enjoyed a good life if it hadn’t been for the stranger whom he met in 1794.

It is said the unknown man who died in Livingstone’s house was buried nearby without the benefit of a Catholic service.

What is somewhat peculiar about this entire story is the fact unexplained events took place even before the traveler had died.

In 1904 the West Virginia Historical Magazine Quarterly wrote that “on the night of his death Livingston employed a man by the name of Jacob Foster to sit up with the corpse. But so soon as the candles were lighted in the chamber of the dead, after giving a weak and flickering light, they went out and the room was left in darkness. They were relighted several times, supposing it to result from some remedial defect in the cradle, but with the same result. Livingston then brought two candles into the room which he had been using in his own family room, which were about one-third burnt down and which he knew to be good. But so soon as they were placed in the room with the corpse they became immediately extinguished. This so alarmed Foster that he abandoned his vigils and left the house. Fifty years ago the grave of the stranger could be distinctly pointed out. 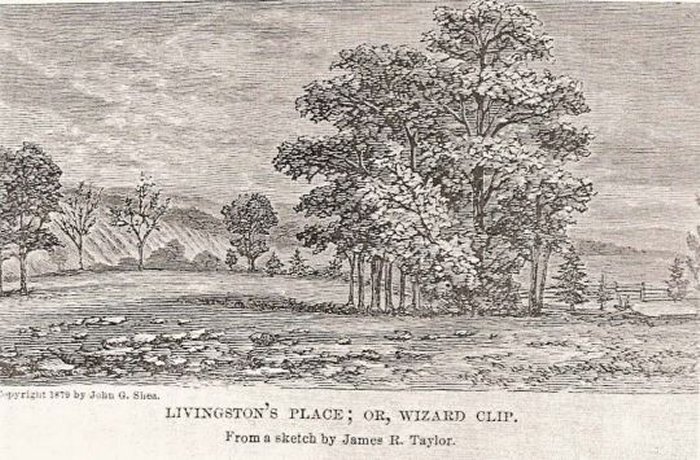 The Wizard Clip mystery is one of America's most famous old poltergeist cases.

On the night succeeding the burial the peace of Livingston was much disturbed by the apparent sound of horses galloping around his house. He frequently rose during the night - which was a beautiful moon-light night - to satisfy his mind. While he could distinctly hear the tramp of steeds, he could see nothing to assure him that it was anything more than a figment of his own imagination.

In about a week afterward his barn was burnt and his cattle all died, the crockeryware in his house, without any visible agency, was thrown upon the floor and broken; his money disappeared; the heads of his turkeys and chickens dropped off; and chunks of burning wood would leap from the fireplace several feet out into the floor, endangering the building unless promptly replaced.

Soon the annoyances, which were then destroying his peace, assumed a new form. The sound of a. large pair of shears could be distinctly heard in his house, clipping in the form of half-moons and other curious figures, his blankets, sheets and counterpanes, boots and shoes, clothing, etc.

This was all in one night, but the operation of clipping continued for upwards of three months, a small portion of it only being done at a time, but the inexorable shears never being silent twenty-four hours at a time. By this time the news of these strange proceedings was spread through the country for thirty miles around and attracted in an especial manner the curiosity of the citizens of Smithfield.

An old Presbyterian lady of Martinsburg, hearing of the clipping that was going on at Livingston's to satisfy her curiosity, she went to Livingston's house. Before entering the door she took from her head her new silk cap, wrapped it up in her silk handkerchief and put it in her pocket to save it from being clipped. After awhile she stepped out again to go home, and having drawn the handkerchief out of her pocket and opened it, found the cap cut in narrow ribbons. 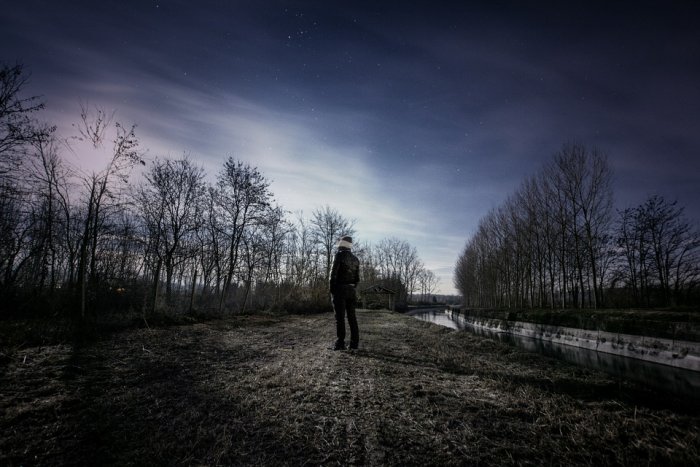 The name of the traveler who came to Livingstone's house remains unknown. Credit: Public Domain

Many other phenomena are stated and testified to by many witnesses. The long continuance of this mysterious clipping had now aroused the country for many miles around. Three daring and adventurous young men from Winchester came to Smithfield declaring their utter unbelief in the reports and offered to sleep in the house all night and to face the devil himself if he were the author of these doings. But as soon as they became comfortably seated in the house, a large stone was seen to proceed from the fireplace and to whirl around the floor with great velocity, when they took to their heels and made their escape.” 1

Isn’t it strange this was the second time Livingstone’s barn had been utterly destroyed? First in Pennsylvania and later in West Virginia. It seems Livingstone’s fate had been sealed.

As the legend tells, Livingstone who was a nerve wreck by now, implored Father Dennis Cahill, an immigrant Irish priest in Shepherdstown, to visit his house to investigate. Apparently, when Father Cahill sprinkled holy water about the property, some of the manifestations changed, and a sum of money that had previously gone missing was deposited on the threshold of the house. Later a mass was held at the house, and suddenly the haunting ceased.

“Livingston was relieved from all annoyances of his ghostly visitor, and it is said that “from that time until he left Virginia, he had frequent communications with the Spiritual world.” 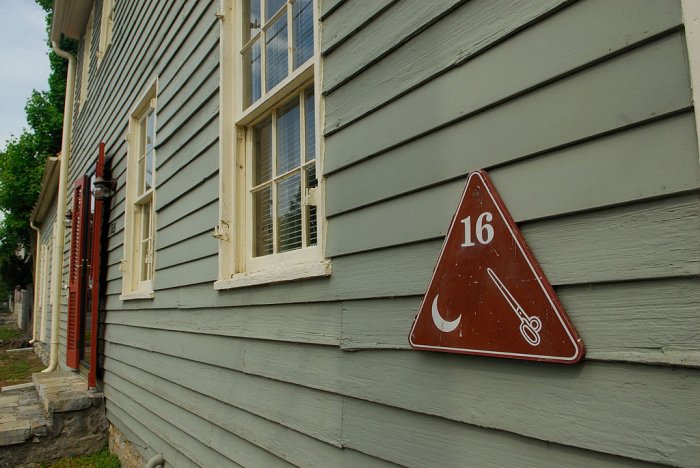 A historical plaque in Middleway, West Virginia with scissors and a half-moon: symbols related to the legend of the Wizard Clip. Credit: Kilo22 - CC BY-SA 4.0

Nevertheless, though Livingstone had no got rid of his ghost, more supernatural events were reported by his family. Legend tells, the family started to hear a mysterious voice they feared, or at least at the beginning. Later they understood this was a "consoling Voice" belonging to a mysterious entity that stayed with them for 17 years. One day the voice manifested itself as a bright light. Livingstone and his family were asleep, but the voice told Livingstone to get up, gather his family, and pray. The voice was pleasant and served as a guide. In time Livingstone became convinced the mysterious voice belonged to a soul in purgatory, and it shouldn’t be surprising to learn Livingstone and his family converted to the Catholic faith.

In 1809, Livingston sold his farm and moved back to Pennsylvania.

Today, the land Livingstone once owned belongs to the Priest Field Pastoral Center and the Church. It’s a spiritual retreat for believers, but no one talks much about the Wizard Clip story unless visitors ask for more information.

The legend of the Wizard Clip is still alive among locals, and in Middleway there are historical markers with a crescent moon and shears in opposite corners to honor the legend.

Something did happen in Middleway all those years ago, and those events have not been forgotten.