Conny Waters - AncientPages.com - Like many other ancient ruins around the world, also Buddhist site ‘Dillu Roy’ has its own history, and is believed to be hiding evidence and clues to the civilizations once surviving and thriving. Mound Dillu Roy was once a sophisticated settlement and had complex religious cults.

The ancient city resembles that of Mohenjo Daro and Harappa in Sindh, one of the four provinces of Pakistan. Historians say Dillu Roy city was built on two levels; the upper part is situated above the land which is now covered in sand while the lower part is buried underground. 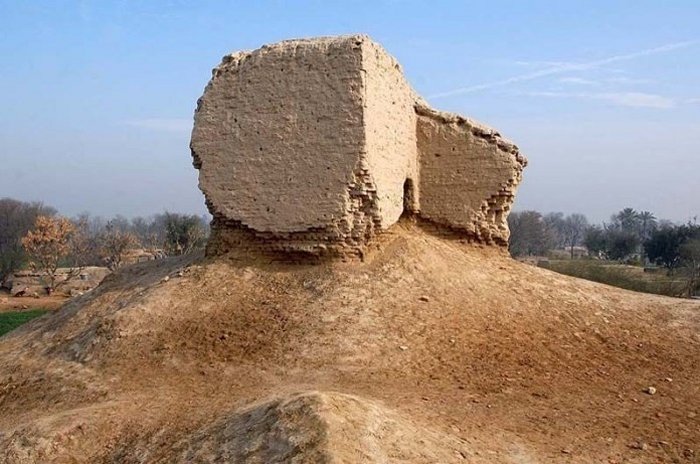 Located between Suleman mountain range a system of outlying mountains in the eastern Iranian Plateau in Pakistan, with northern spurs situated in Afghanistan, this ancient land witnessed many royal families, kings, rajas, and sardars. The ruined forts, cities, and villages are hidden under the soil accumulated over centuries of human interventions and weather impact.

The ruins of Dillu Roy - the city named after a Brahman prince called Dillu Roy - have been waiting many decades for excavations that can shed light on the history of the rise and fall of the dynasties of ancient times and the culture that once flourished there.

Mound Dillu Roy or Dillu Roy Ther (‘ther’ means in English – ruins) dates back to the Buddhist era and it was declared a protected site in 1962. The ancient site has to be protected and therefore, now, there is money to build a 6,400 feet long boundary wall around the Buddhist site ruins for protection from private collectors of artifacts and to undertake excavation, writes Daily Times. 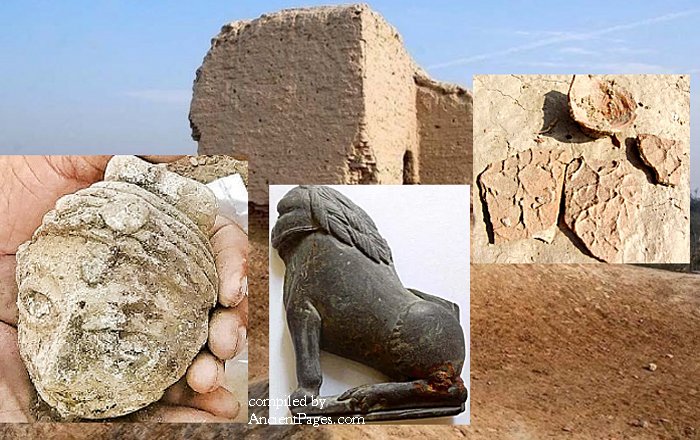 Artifacts excavated at the Buddhist site of Dillu Roy.

Dillu Roy is believed to be a prince who once ruled this area, and according to a myth narrated by renowned travelogue writer Dr. Abbas Birmani in his book ‘Magical Valleys’ (‘Tilismati Wadiyan’ ), he was a cruel ruler and the city faced destruction due to a curse from a woman. The ruins are described as ‘a speaking city asleep’.

The excavation began in Jan 2020 and concluded on Mar 20, 2020, and as informed Muhammad Hassan, the lone archaeologist of Punjab archaeology, who led the excavation works, “it was a 45-day exercise, which, however, lasted for 52 days due to shortage of skilled workers.” Fortunately, its completion coincided with the novel coronavirus lockdown but we were done with the project by that time.”

Hassan said that the contour of the mound was intact and the watchtower structure stands surviving on a cultural heritage site. 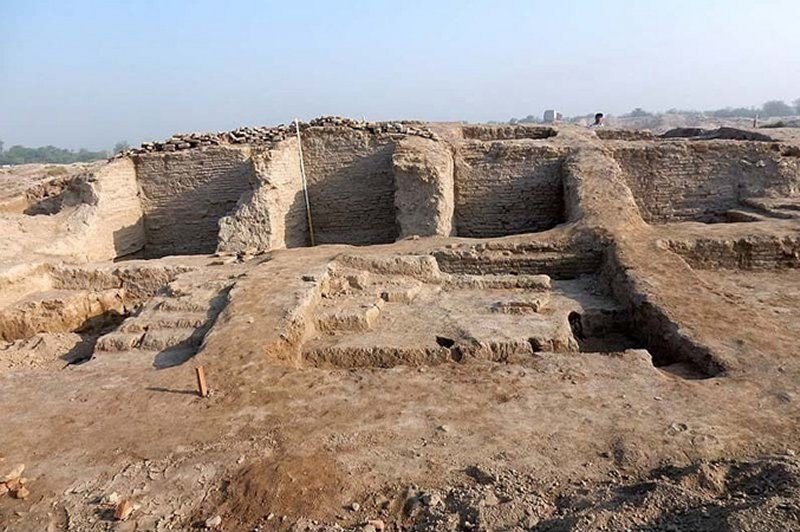 The site covers the almost 50-acre area and divided into two parts roughly 35-45 meters. The excavation was undertaken on scientific lines on three selected points and 22 squares measuring 5×5 meters were opened. Besides this, the ruins of the fortification wall and other mud-brick structures, occupational levels have been revealed in different squares under dug.

“It seems the most of the upper part of the mound was subjected to human vandalism and rain disturbed. Scanty cultural deposits of the last phase of this city were recorded. The diggings unveiled material evidence that helped link the missing gaps of the Gupta, Sassaians, and Kushan periods, Muhammad Hassan said.

The team also excavated pottery and small finds which belong to 2nd to 7th century AD.

Other artifacts are tablets and seals that depict the human figure along with the Brahmi script. Some figures are fascinating and provoke thoughts for further study. These are related to Indian and Greek mythologies. Many figures of these mythologies have been reported but stylistically these are new and different from the others, according to the archaeologist who added that "the excavation season 2020 was helpful in finding new information and substantiated earlier assessments that it was Buddhist site from Scytho-Parthian era." 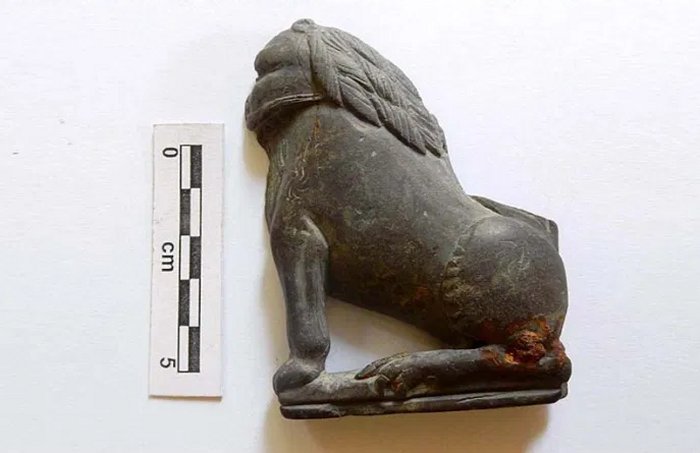 The typical Gandharan style small figure of lion’s (Simha) left side shows a sturdy lion in an upright seated position. However, the right side of the lion is strikingly different and unusual. It represents episodes associated with the Buddha-like Naga Apalala and episodes of the Visvantara Jataka. Image credit: Qasim Ghauri/APP

“Though limited both in time and extent, the excavation produced some material relic of Brahmanical character in pre-Muslim levels, which in the absence of dateable evidence, can not be placed securely within the known dynastic division of Hindu India.”

However, some of these deserve a special mention including a seated lion in gray schist stone panel depicting Jataka story, a terracotta Buddhist plaque, and a clay female seated statue. The chronological sequence of Mound Dillu Roy can be compared with various sites in Gandhara like Taxila, Shaikhan Dheri, Badalpur, Kashmir Smast etc. 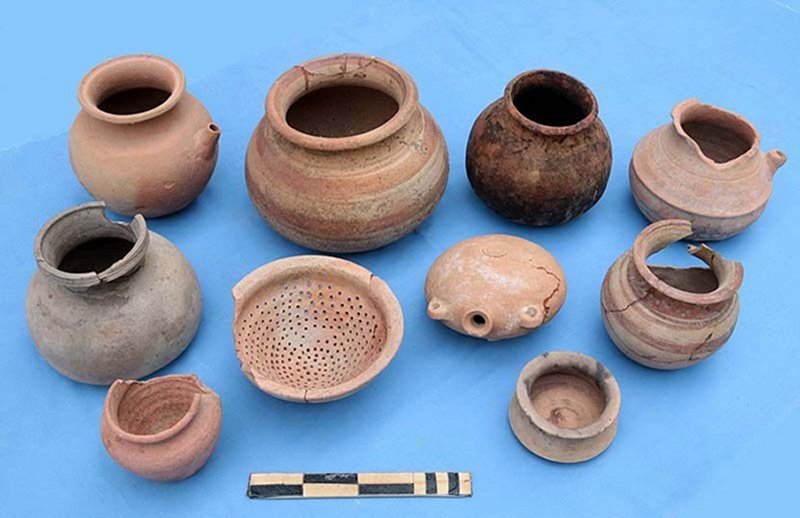 The discovery of terracotta Buddhist plaque is also very interesting but unfortunately partly broken. These figures were drawn in Indian style which is well known from Mauryan and particularly Shunga period down to a very late period.

The remarkable clay female seated statue was found at the depth of 42cm from the surface on the floor level. The mud clay the statue was in broken condition with its head, an arm, and torso separated and it looked as if it was fixed in a wall or placed on a cornice at a reasonable height. “Most probably, this figure is Parvati due to her prominent breasts and third eye.”

The discovery of a thick deposit of clay bullae/sealings was unique.

“More than 1000 clay bullaes were found and such type of sealings were commonly used for different purposes like official documents, private letters or personal seals, banker or merchant stamps, Buddhist codes for teaching and religious purposes.”

“These usually display personal names and titles. The bullaes/sealings in different imprints and scripts, decorative burnt bricks, and inscribed baked bricks are of paramount archaeological interest”, the archaeologist said.