Jan Bartek - AncientPages.com - During the Middle Bronze Age, about 4,000-5,000 years ago, an unknown civilization was present in the Middle East. These mysterious ancient super-builders left behind hundreds of enormous stone structures. Who were these people? Where did they come from and what happened to them?

These are questions archaeologists have tried to answer for many years and the discovery of prehistoric rock art may now shed new light on the identity of these enigmatic super-builders.

There are several dolmens of various sizes and shapes scattered in the region. Dolmens are megalithic tombs. One theory is that they were constructed by nomad tribes who buried their dead in central holy places. The dolmens in Northern Israel and not been properly examined but based on current knowledge it seems some of them were reused for secondary burials long after they have been erected.

Who Were The Mysterious Ancient Super-Builders  In The Middle East?

Scientists who have studied cave carvings discovered on walls of four different dolmens in the Galilee and Golan regions assume the prehistoric rock art was created by the unknown super-builders.

What can we learn from these ancient carvings? The depictions of various animals tell a lot about their world. On the carvings, we find horned animals such as ibexes, antelopes, and wild cattle. At another dolmen, the top stone was designed to resemble a human face, and a third dolmen features carvings of geometric shapes. 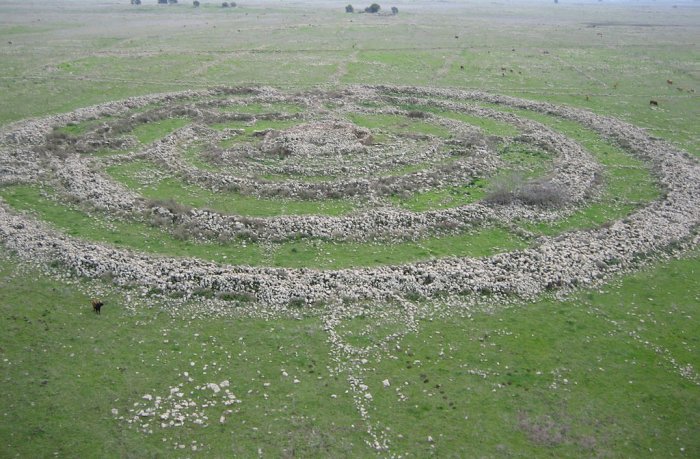 The strangest of all ancient structures is known as Rujm el-Hiri – Gilgal Refaim in the Golan Heights. Credit: Public Domain, CC BY-SA 3.0

“A few years ago, a panel bearing wall drawings was discovered in a huge dolmen in a field near Kibbutz Shamir. That was the first time rock art had been documented in the context of dolmens in the Middle East. Following that discovery, we started a research project to locate and document art on dolmens throughout the Land of Israel.

We have covered dozens of dolmens throughout the Upper Galilee and the Golan Heights in an attempt to reveal the world of the members of this mysterious culture, which existed here over 4,000 years ago and left only dolmens as proof of their rich culture,” Professor Agone Sharon, head of the MA program in Galilee Studies at Tel Hai Academic College explained.

His colleague, archaeologist Uri Berger of the Upper Galilee Department at the IAA added that “many dolmens have been found in Israel and neighboring countries, but we knew virtually nothing about this civilization of super-builders, other than the remains of the enormous structures they left behind as testimony of their existence. The cave carvings offer us the first glimpse of the culture behind the construction of the dolmens.”

One of the most amazing of these dolmens is called Rujm el-Hiri. The name can be translated as the stone heap of the wild cat. This ancient megalithic monument consisting of concentric circles of stone with a tumulus at the center is located not far from the east of the coast of the Sea of Galilee. In the same area, there are hundreds of dolmens and the purpose of the site is still an ancient mystery. 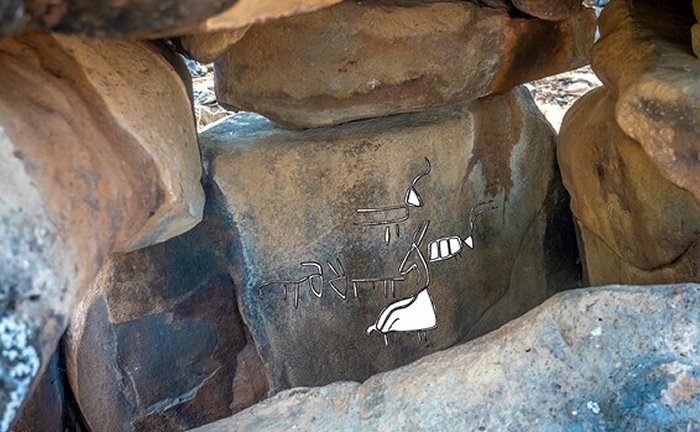 “The two major problems concern the function and the date of the site. There is no agreement as to its function, and no other similar structure is known in the Near East; likewise, its date is unknown, because of the absence of datable artifacts in its immediate vicinity.” 1

Scientists can still not decide whether Ruijm el-Hiri was used as an astronomical calendar, ritual center, or a burial site.

In the Bible, there are many stories dealing with the Rephaim, a group of giants described as "a mighty people with tall stature who lived in Canaan. Ne'eman, Yuval, (1925-2006) an Israeli theoretical physicist, military scientist, and politician suggested the Rujm el-Hiri site is probably the source of the legends about "a remnant of the giants" or Rephaim for Og. 2

Could at least some of the dolmens in the Middle East have been build by ancient giants?