Jan Bartek - AncientPages.com - It's hard not to admire this stunning 2,000-year-old sapphire ring. It's an ancient Roman treasure believed to have once belonged to Caligula, the third Roman emperor, ruling from 37 to 41. 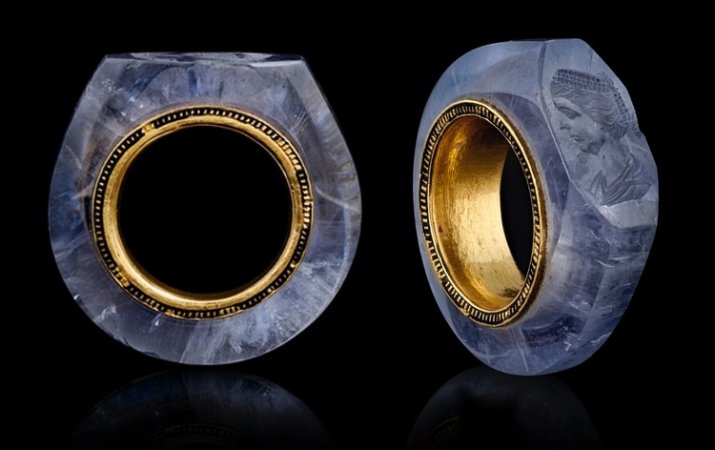 Today, Caligula is remembered as an infamous emperor who was smart but also cruel. Whether he was insane or not is still debated, but there is no doubt he was one of the most brutal emperors in ancient Rome. He forced his contemporaries to worship him as a god, committed incest with his sisters, and wanted to make his horse a consul. Torture and executions were a daily routine during his brief reign.

If historical accounts of Caligula's behavior are based on actual events, one can say this precious ring is just as beautiful as Caligula was awful.

The sky blue hololith, made from a piece of precious stone, is believed to depict Caesonia, Caligula's fourth and last wife. Rumors said she was so beautiful that the emperor told her to parade naked in front of his friends occasionally.

Caesonia must have been extraordinary because Suetonius, a Roman historian, described her as "a woman of reckless extravagance and wantonness."

Caligula's love story with Caesonia resulted in the birth of Julia Drusilla. Caligula was deeply in love with Caesonia, and she was the emperor's most important confidant. However, the couple was surrounded by enemies who wished to remove Caligula from power.

Caligula was assassinated due to a conspiracy by officers of the Praetorian Guard led by Cassius Chaerea, senators, and courtiers. Caesonia and her daughter were murdered as well. Different sources report different versions of the murder. According to some, Caligula was stabbed in the chest. Others say he was pierced with a sword between the neck and shoulder. 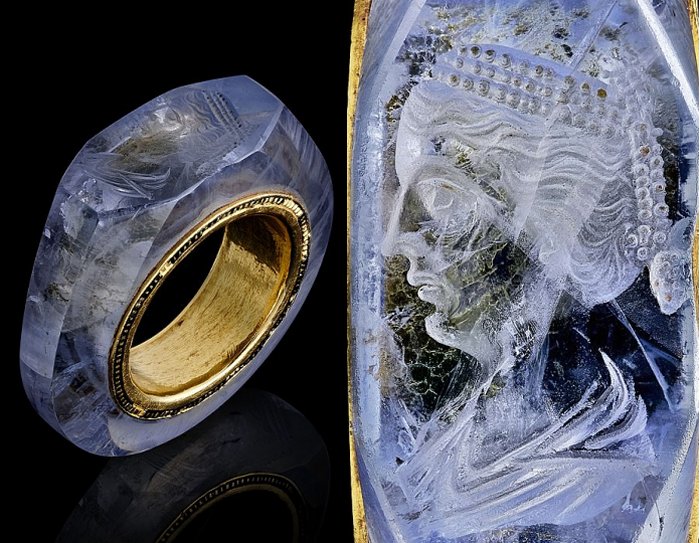 "According to Seneca, Chaerea managed to decapitate the emperor with one blow, but many conspirators surrounded the emperor and thrust their swords into the corpse anyway.

Reports say that the empress faced the blow courageously and that the little girl was dashed against a wall. Then Chaerea and Sabinus, fearful of what would follow, fled into the interior of the palace complex and from there, by a different route, into the city. "1

Caligula's beautiful sapphire ring was part of the collection of the Earl of Arundel from 1637 to 1762 when it became one of the famous 'Marlborough Gems.'

Not surprisingly, the ring caused a sensation when it was made available for purchase in an auction by Royal jewelers Wartski.

"This ring is one of the prestigious 'Marlborough Gems,' having previously been in the collection of the Earl of Arundel. It is crafted entirely of sapphire. Very few hololiths exist, and I would argue this is the best example you can find. We believe it belonged to the debauched Emperor Caligula, and the engraving shows his final wife Caesonia," Kieran McCarthy, Wartski director, said.