Ellen Lloyd - AncientPages.com - Myths and legends from across the world reveal that ancient civilizations had a fascination with turtles and the animal was considered sacred in many parts of the world. The turtle, one of the longest living animals on Earth was often associated with the creation of the world. 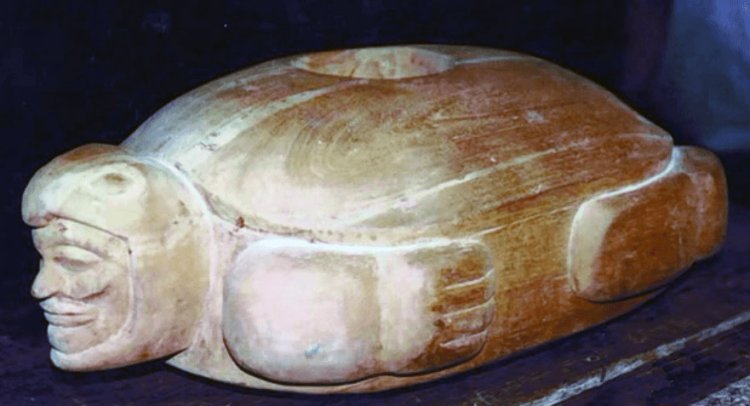 Let us begin with this mysterious ancient artifact that depicts an aerodynamically fashioned human inside a turtle shell. It was created by the ancient Maya civilization that like so many other cultures across the world worshipped the turtle.

It is interesting to note that in Central America, Guatemala there are a number of ancient myths and legends describing how natives witnessed giant flying turtles the skies.

The ancient worship of turtles is by no means restricted to Central America. In Hindu mythology, the god Vishnu took the form of a turtle to carry the world on his back. 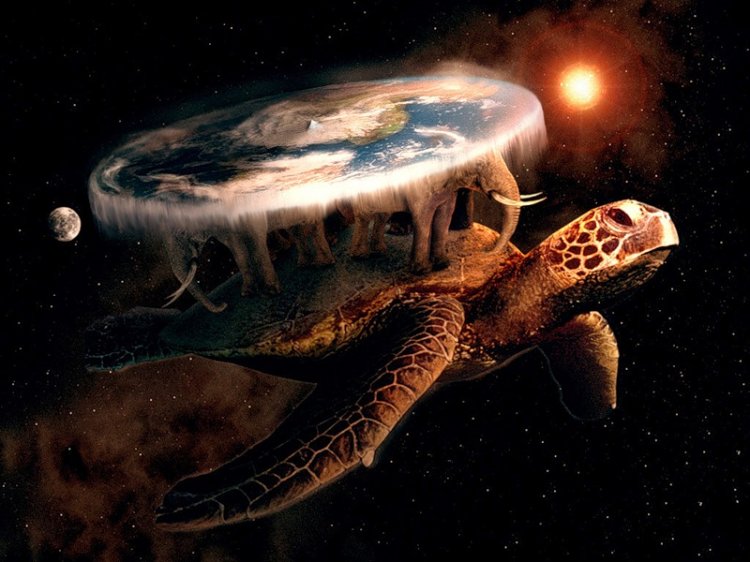 The ancient worship of turtles is by no means restricted to Central America. In Hindu mythology, the god Vishnu took the form of a turtle to carry the world on his back.

In China, the turtle with its rounded shell and square-shaped body reminded ancient people of the concept of “round heaven and square earth”.

It was, therefore, considered to be a spiritual being and turtles enjoyed very high status at the time. Ancient Chinese created very sophisticated jade turtles in various colors. Several such remarkable artifacts have been unearthed by archaeologists in the Yin ruins in the Henan province. 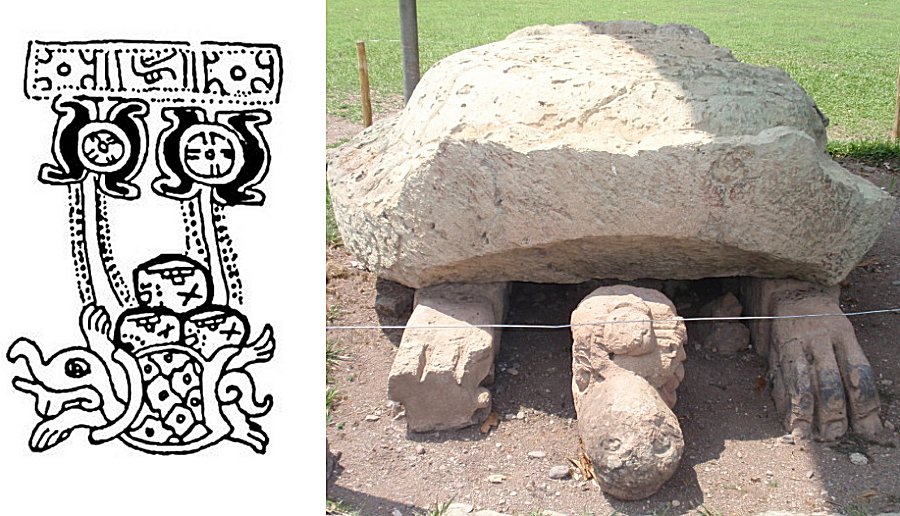 Left: Madrid Codex depicts the three hearthstones of creation on the turtle. Right: Copan, Guatemala. “One head of the turtle is facing north, and the other is facing south.”

Turtles are often mentioned in Native American creation myths and legends. Like the Chinese, Indians have a legend that “the world is supported by four elephants standing on a giant turtle.”

Native American Indians believed that the Great Spirit created their homeland by placing earth on the back of a giant turtle. This is why some contemporary Native Americans refer to North America by the name “Turtle Island.”

Turtles are a symbol of the earth in many different Native cultures. To Plains Indians, turtles are associated with long life, protection, and fertility. In some Plains tribes, a newborn girl’s umbilical cord was sewn into a figure in the shape of a turtle to ensure her health and safety. In other tribes, turtles are often associated with healing, wisdom, and spirituality.

In many late classic Maya scenes, the maize god is depicted emerging out of a turtle. The turtle floating on the sea served as a basis for the world in the ancient Maya thought. A late post-classic scene from the Codex Madrid portrays a darkened sky raining upon the earth with three hearthstones atop its back.

Perhaps we should ask ourselves why so many different ancient cultures that obviously had contacts with each other and were separated miles from each other, associated the turtle with the creation of the world?

At this point, we could still dismiss all the ancient turtle’s stories as pure mythology.

However, the story gets even more interesting when we learn about ancient peoples’ contact with the three-legged turtle. According to ancient myths and legends, Chinese people came in direct contact with a very strange being that gave them knowledge for the future.

We learn that “from the river I, the three-legged turtle Nai delivered the eternal laws on iron Lo-tablets to the Chinese.”

Native Americans of Delaware also speak of a three-legged turtle in their Great Flood story. The East Pomo, a Hoka Native American tribe, speaks of a race that was evil and terrible. They were capable of flying through the sky in turtles made of impenetrable iron with which they could drill themselves into the earth.

According to the ancient Maya, the beginning of time was initiated with “Three Stones of Creation” by the deity Wak Chan-Ahaw, which literally means “Risen Master of the Sky.” Wak Chan-Ahaw was the god of corn, oftentimes also referred to as Hun Huhnapu, father of the heroic twins. He was killed in the underworld. Yet, with the help of his sons, he was resurrected. This resurrection is always represented by him emerging out of a turtle shell.

There is absolutely no doubt that the turtle played a very important role in the ancient world and as we know, every legend has a true core…

The Oxford Handbook of Mesoamerican Archaeology