A. Sutherland - AncientPages.com - They are considered to be "hats of ancient wizards" but their original purpose has baffled scientists for many decades.

Did wizards wear conical hats? Similar hats were worn by many gods. Quetzalcoatl wore his conical cap as Ehecatl, the snake-bird deity, and god of wind feared by the Aztecs, the Sumerian gods were often depicted in similar cone-shaped hats. 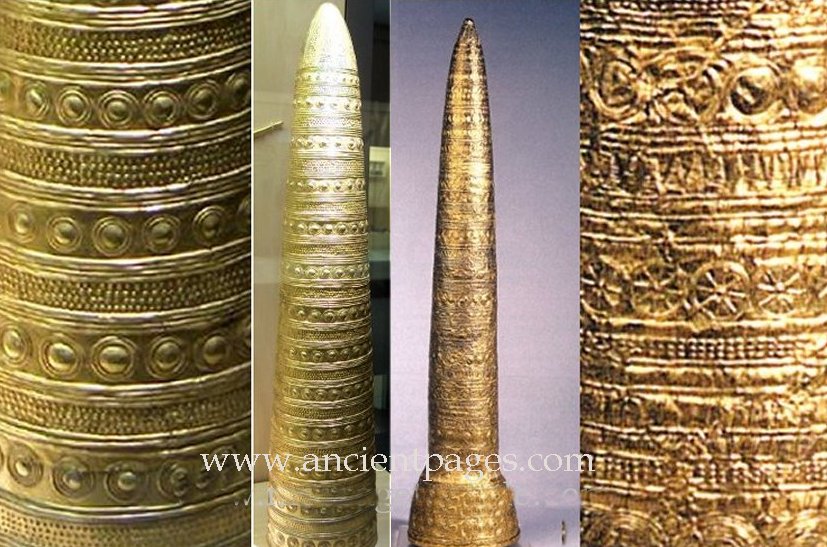 Are the circular symbols on the golden hats a proof of a highly advanced astronomical knowledge of the Bronze Age or perhaps the hats were used as cult objects in ceremonies and rituals?
If so, who was the subject of this worship?

Could the Bronze Age people possess such sophisticated astronomical skills as those presented on conical hats? Where did their advanced knowledge come from?

At first, there was only "a piece of sheet metal 8 cm below the surface of the earth. Since this disturbed the work, it was chopped up and thrown away carelessly. It was only when the sheet metal pieces were washed away by the rain that they were recognized as gold and collected by a worker's wife. Georg Raschke, then head of the prehistoric and early history collection of the Germanisches Nationalmuseum, was able to correctly classify the fragments based on the circular ornaments on them. He managed to buy the gold sheets (280 g) and when the site was examined, he found further fragments (30 g) and fragments of two bronze tires. Subsequently, it turned out that these could have been part of a hat brim reinforcement." 1

Four of the elaborately decorated cones have been uncovered at sites in Switzerland, Germany, and France over the past 170 years. 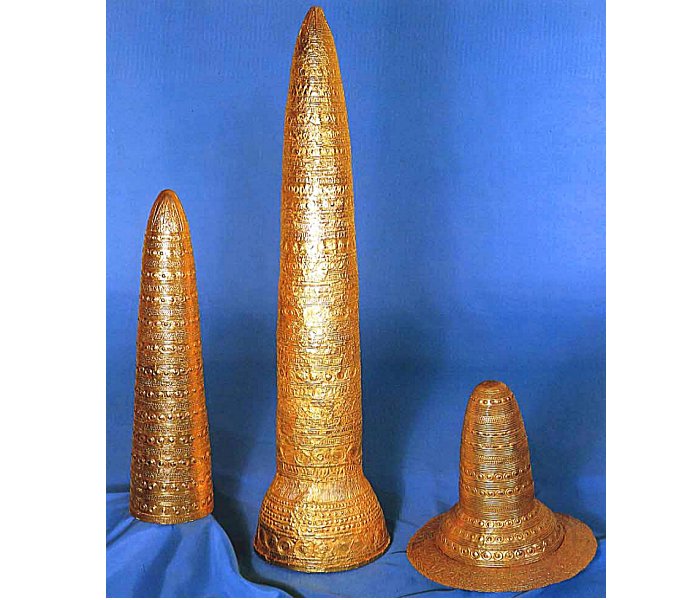 The third one of these artifacts known as 'Golden Cone of Ezelsdorf-Buch', also dates back to c. 1000–900 BC and was discovered near Ezelsdorf near Nuremberg in 1953. It is the tallest known 'hat' measuring about 90 cm. The fourth is 'Berlin Gold Hat', probably originates from Swabia or Switzerland, and is dated to c. 1000–800 BC.

The gold hats are 3,000 years old and are very similar to each other regarding their form and symbolism and decoration like disks, circles, and wheel symbols.

All four hats were hammered up whole from a single piece of gold. 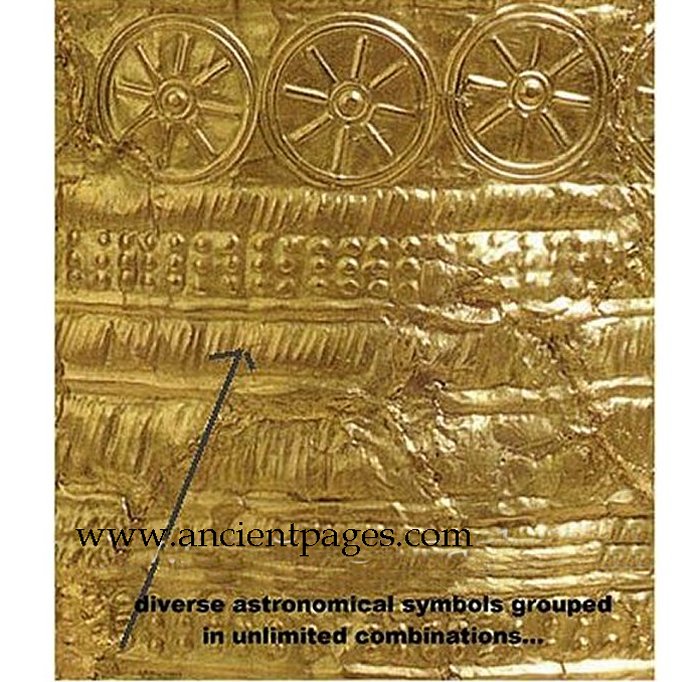 One of the theories proposes that mysterious conical hats were worn by "king-priests" (Lords of Time) possessing supernatural powers because of their ability to predict the correct time to sow, plant and harvest.

The tallest of them, measuring 90 cm, is that found in Ezelsdorf near Nürnberg. Germany in 1953.
According to scientists who analyzed strange artifacts, these were used to calculate the movements of the sun and the moon in advance.

Another opinion is that the cone-shaped ceremonial hats represent ​​the conical crown of the gods from the region of the Near East, which should serve 'the cultic 'exaggeration' of a person through a high head covering.'  The mysterious conical hats have been also related to the so-called 'priest-kings' (Lords of Time) who possessed supernatural powers because of their ability to predict the correct time to sow, plant, and harvest. 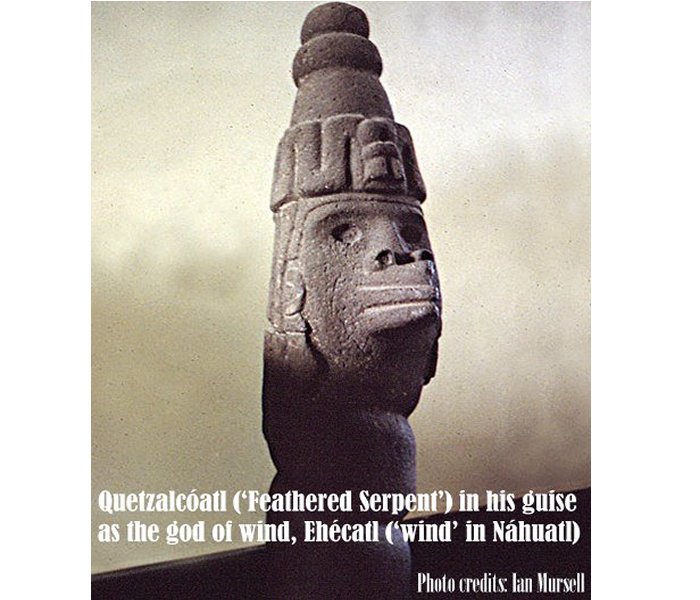 However, there are other interpretations of numerous combinations of both astronomical and calendrical symbols that cover four conical hats.

Then the number of days is compared to astronomical cycles like the synodic month or the tropical year. 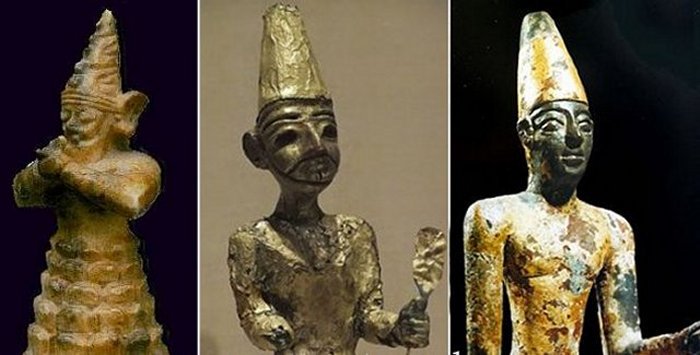 Other explanations suggest hats, quivers, calendars of a different kind, containers, crowns, and much more.

According to scientific studies, the 1,739 sun and half-moon symbols decorating the hat's surface make up a scientific, still undeciphered code which resembles 18.67-year cycle called the "Metonic Cycle" probably identified by Meton of Athens (born circa 460 B.C.; date of death unknown), a Greek mathematician, astronomer, geometer, and engineer.

But the problem is that the Meton's "discovery" took place 500 years after the mysterious conical hats were made.

Similar five golden cones were also unearthed in Ireland during the 17th and 18th centuries and even in many other places of prehistoric Europe, according to Prof Sabine Gerloff, a German archaeologist from Erlangen University, Germany and other researchers.

D. Price, Europe Before Rome: A Site-by-Site Tour of the Stone, Bronze, and Iron Ages