A. Sutherland - AncientPages.com - Cnut The Great (in Swedish: “Knut den Store”) became king over large parts of northern Europe, where commerce and culture flourished in his kingdoms.

But the Viking king had to fight very hard to reach his power.

His father, the Danish Viking King Sven Forkbeard (Sven Tveskäg), son of Harald Bluetooth sailed with his fleet for England in the summer of 1013. His goal was to overthrow the Anglo-Saxon King Aethelred the Redeless and conquer islands. 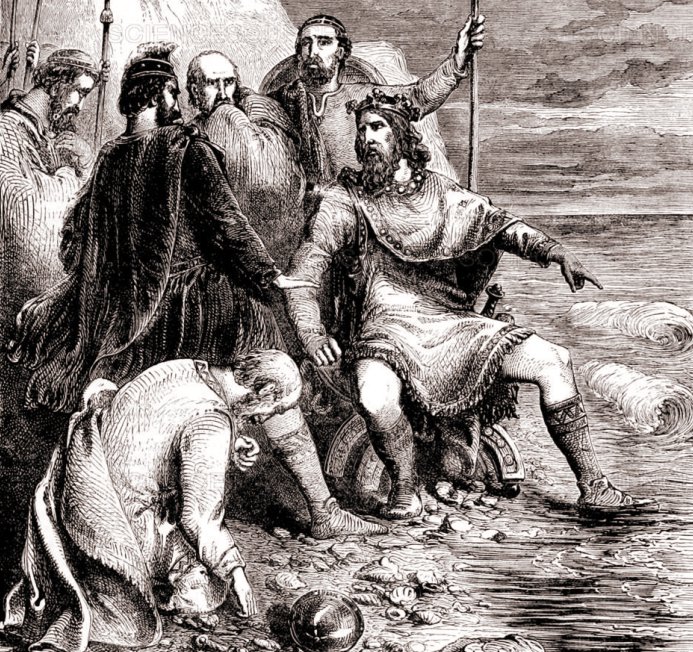 Cnut reproving the flattery of his courtiers. Cnut the Great (995 - November 12, 1035) was King of Denmark, England, and Norway; often referred to as the North Sea Empire. source

When the Scandinavian fleet landed in northeast England, Aethelred fled to Normandy, France, transferring power to Sven Forkbeard, who had among others was joined by his second eldest son, 18-year-old Cnut. Forkbeard sat on the throne just a few months before he died on February 3, 1014.

His eldest son Harald was crowned king of Denmark. The younger brother, Knut, was at that time the head of his dead father's invasion force but was now ready to inherit the throne of England.

The army proclaimed Cnut king but the English people invited Aethelred back if he promised to rule better than he had before. Aethelred acted fast; he drove Cnut and his forces out to sea. Cnut decided not to press the point at this stage and withdrew to Denmark. 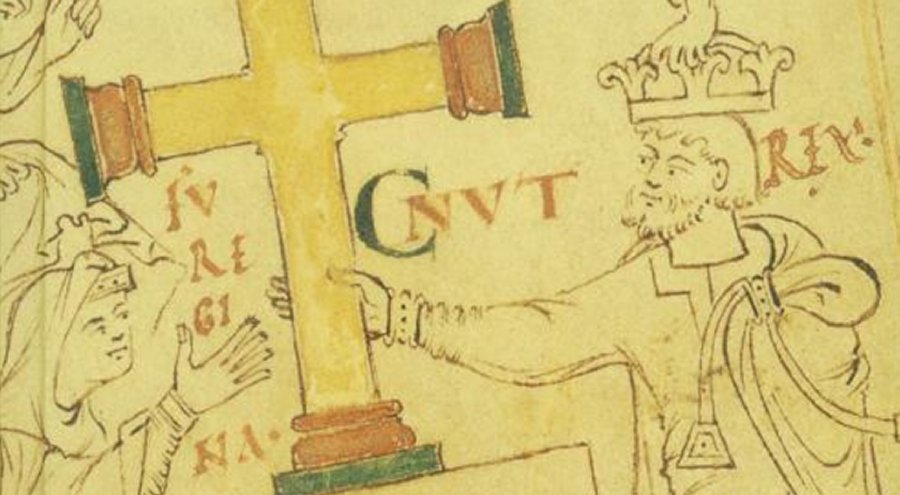 "I welcome your arrival, dear brother, and am grateful that you visit me. But it's hard to hear what you say about the kingdom split. .."

He contacted his brother in the hope that the two brothers would rule Denmark together, but Harald refused.

"I welcome your arrival, dear brother, and am grateful that you visit me. But it's hard to hear what you say about the kingdom split. The inheritance of our father, with your consent, has been given me, I control. It hurts me to hear that you lost your inheritance, which was bigger than this, and I am ready to help you. But my kingdom, I do not share," Harald explained kindly for his brother according to ancient source from 1043.

Instead, Harald offered his help; he knew that Cnut needs a strong army to take up the fight against Ethelred. In the summer of 1015, Cnut's fleet of 200 ships, and over 10 000 men sailed to England.

"On this big raid was not a single slave. Neither men freed from bondage. None of the call origin and no one was weak from old age. All were noble and strong men in their best years. All was ready for any form of combat. And they were all so fast that they surpassed the rider's speed, "reads the description of the tribute scripture."

At the battle of Ashingdon in Essex in October 1016, he routed the army of  Aethelred and his eldest son Edmund Ironside. He managed to gain control of virtually the whole country, except for the city of London. 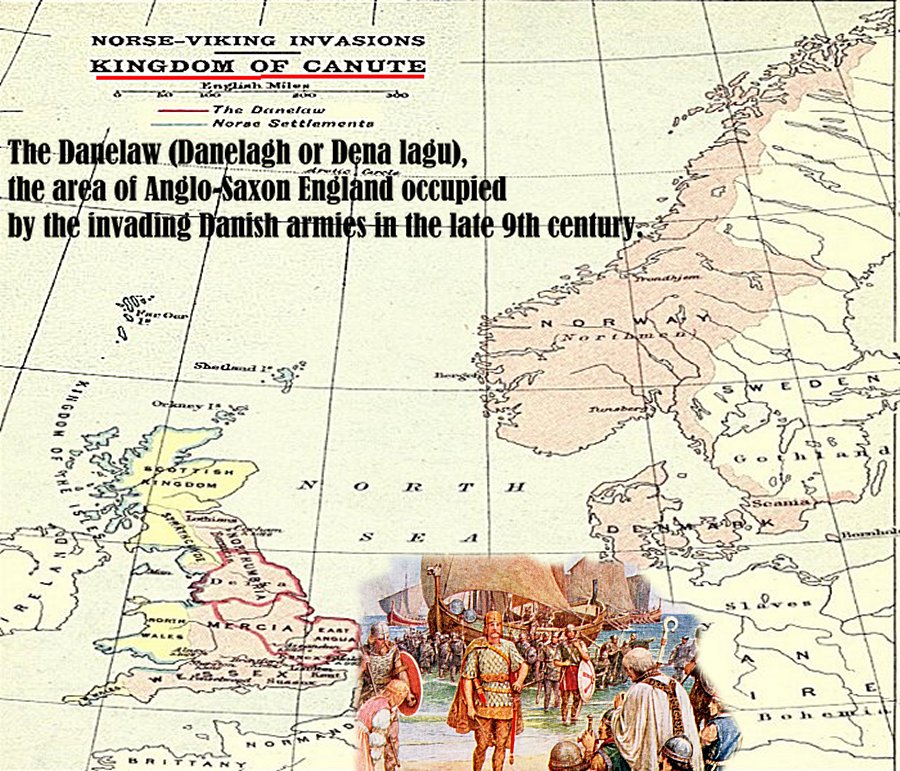 The land of England north of the Thames was surrendered to the Danes – a return of the Danelaw (Danelagh or Dena Lagu), which was the area of Anglo-Saxon England occupied by the invading Danish armies in the late 9th century.

Edmund died shortly afterward and Cnut assumed control of his territories and was crowned King of England in January 1017. His brother Harald died in 1018 and with a predominantly English force, Cnut returned to Denmark to claim the throne.

After the coronation, Knut traveled back to England.

The Norwegian and Swedish kings - Olav Haraldsson and Anund Jacob - tried to take advantage of Knut’s absence in Denmark and attacked the country on several occasions. 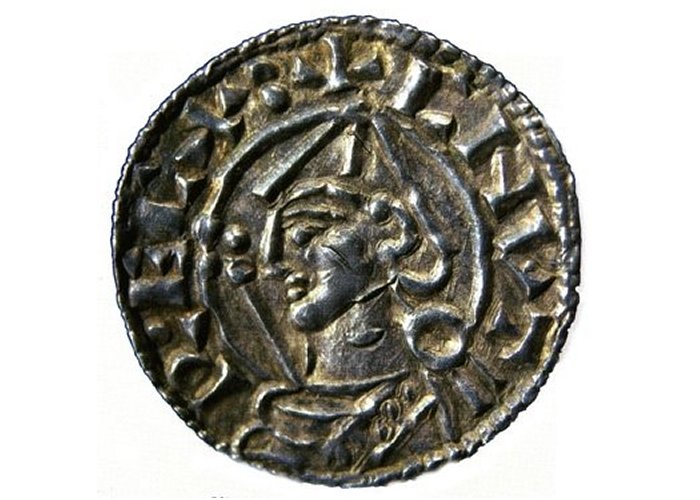 Even Cnut’s commanded deputy was in a coalition with the kings and had serious plans for usurping power, but Knut immediately traveled back to Denmark.

He crushed all resistance and punished the deputy for his questionable loyalty.

An early morning, the deputy received his sentence in a church in Roskilde, on the island of Zealand in eastern Denmark, where he was killed by Cnut’s men.

He was buried in England's then capital Winchester. Before he died, he had expanded its already large kingdom so that it also included Iceland and Scotland - and thus at the same time gained a place in history as the ruler of one of the largest Nordic empires.

Cnut, commonly known as King Canute, is today depicted as a successful and very wise king. With violence and well-chosen alliances, he built up a huge empire; he was the most powerful king in northern Europe in the early eleventh century. He was King of Denmark and England, for a time King of Norway and possibly lord of parts of Sweden.

He lived a very long time ago and therefore, there is very little historic information about him.

Copyright © MessageToEagle.com This material may not be published, broadcast, rewritten or redistributed in whole or part without the express written permission of AncientPages.com