A. Sutherland  - AncientPages.com - Nippur (Sumerian: Nibru, "Enlil City"; Akkadian: Nibbur) was among the most ancient of Sumerian cities and one of the most important religious centers throughout Mesopotamia.  Some researchers date back the city’s creation to about 5000 BC.

Throughout the history of Sumer, Nippur - located northeast of the town of Ad-Diwaniyah, now in southeastern Iraq - had a special place among the cities. 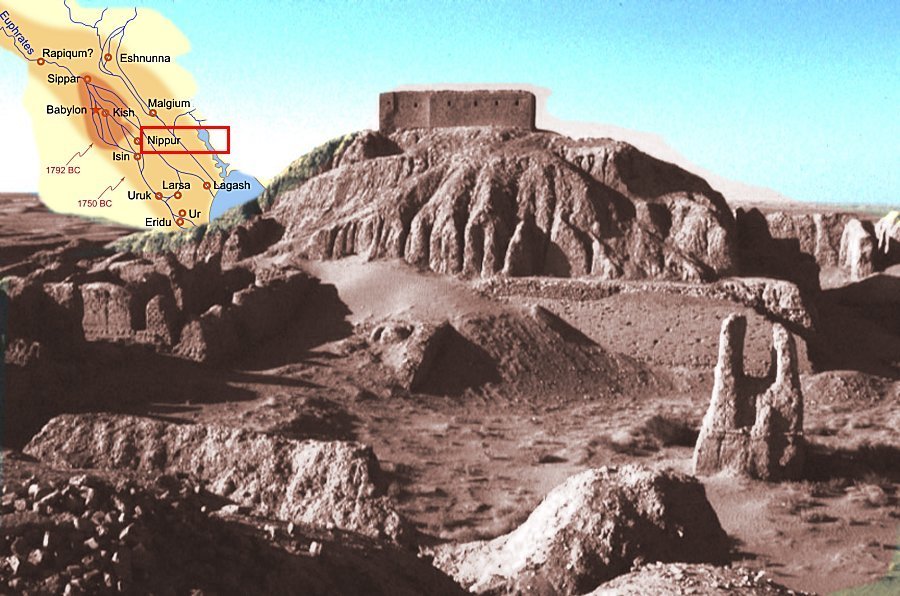 Based on the earliest existing records, it is known that Nippur was not a capital but a sacred city, a central and unique shrine of the region. Its holy character helped Nippur to survive several wars and the fall of dynasties that brought destruction to other cities.

Nippur was the seat of Enlil, the chief god of the Sumerian pantheon, the "Lord Wind," ruler of the cosmos, and one of the triads of gods including Anu (Sumerian: An) and Ea (Sumerian: Enki). The city - - located halfway between the cities of Ur and Sippar - also played a major role in politics.

Based on the earliest existing records, it is known that Nippur was not a capital but a sacred city, a central and unique shrine of the region. Its holy character helped Nippur to survive several wars and the fall of dynasties that brought destruction to other cities. 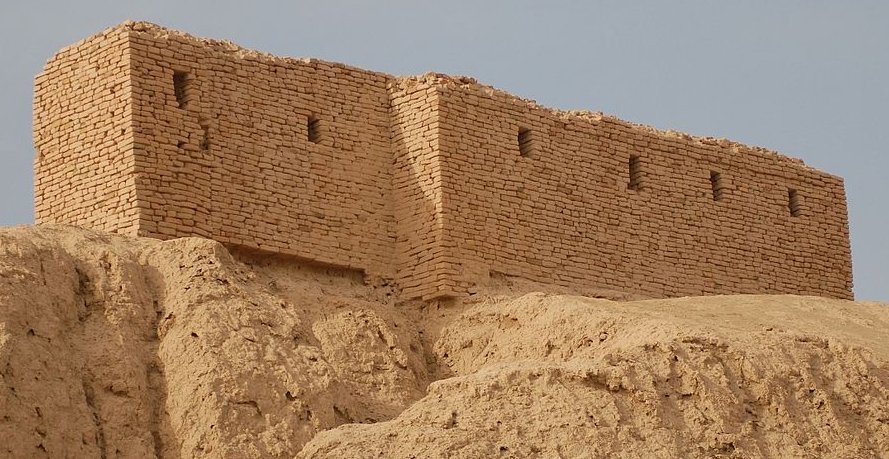 Ruins of a temple platform in Nippur—the brick structure on top was constructed by American archaeologists around 1900. Image via Wikipedia

Kings were involved in the city’s restoration of temples, construction of fortification walls, public administrative buildings, and canals. Even after 1800 BC., when the Babylonians made Marduk the most important god in southern Mesopotamia, Enlil was still worshiped and had his sanctuary. Nippur still remained a holy and prestigious city, with more than a hundred temples, regardless of which dynasty ruled Mesopotamia.

Probably because of its strategic location and sacred meaning, it remained a neutral city. 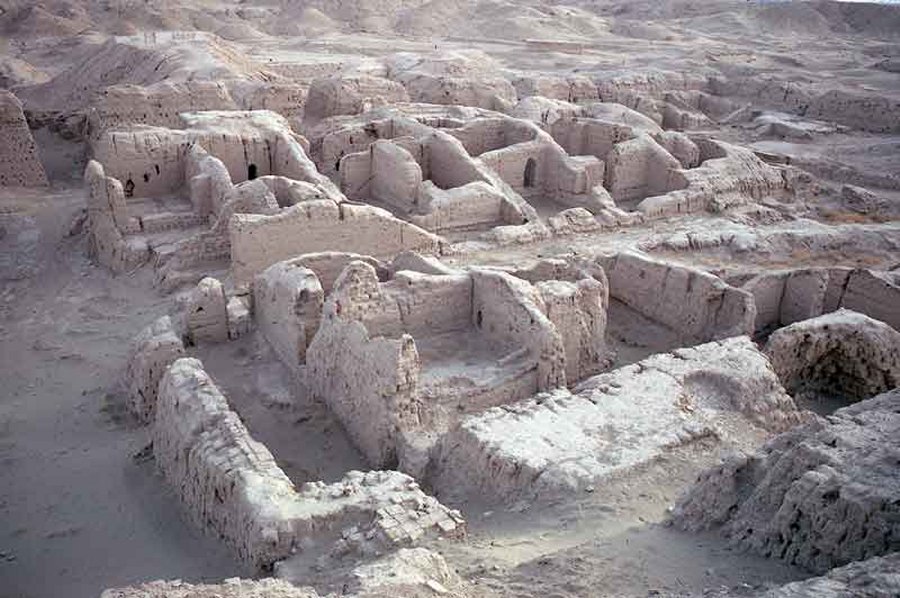 The first mention of Nippur is related to the construction of a temple to Enlil. It was erected during the reign of King Enmebaragesi, a king of Kish, according to the Sumerian king list. The list states that he subdued Elam and reigned 900 years.

Enmebaragesi dominated Sumer around the year 2700 BC and also controlled Nippur. Little is known about the prehistoric city of Nippur, but by 2500 BC the city expanded was fortified and probably reached the extent of the present remains.

In about 2450 BC, the city became part of the empire of Eannatuma of Lagash, and about the year 2430 BC, Nippur was conquered by Enshakushanna, a king of Uruk in the later 3rd millennium BC, who, according to the Sumerian King List, reigned 60 years.

About .2300 BC, Sargon's Akkadian empire controls the city and around the year 2230 BC Sargon's grandson - Naram-Sin - under the influence of the oracle of the temple attacked Enlil in Nippur. As a result, there was a meeting of the eight most important gods, who withdrew their support for the king; the city’s inhabitants began to suffer from hunger. 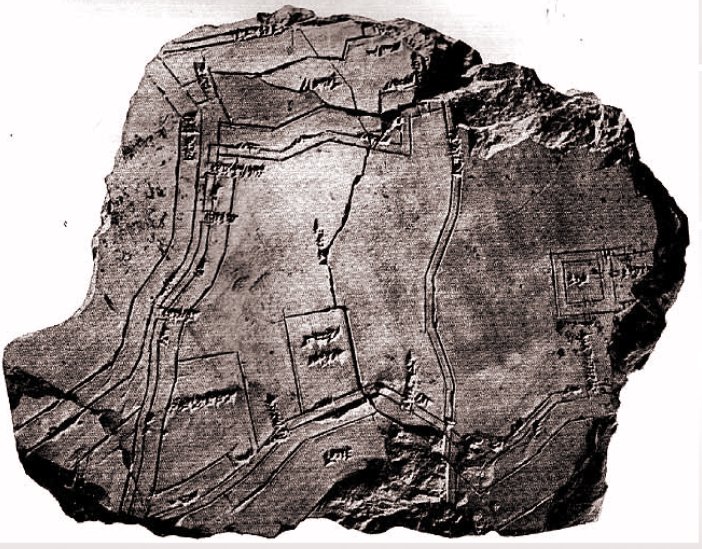 With the collapse of the Sumerian civilization and Ur about 2000 BC, Nippur briefly was occupied by the Elamites and later incorporated into the Amorite kingdom of Isin.

In the eastern part of the city, the so-called ‘scribal quarter’, archaeologists unearthed several thousands of Sumerian tablets, with economic texts, lexical and many examples of the Sumerian literary texts. Most of them were found in the archives in two private homes.

Another part of the city was the ‘sacred area’ with the temple complex and a ziggurat called E-kur (in its present form), where construction works were performed by the first kings of the Third Dynasty of Ur - Ur-Nammu and Shulgi (2094–2047). 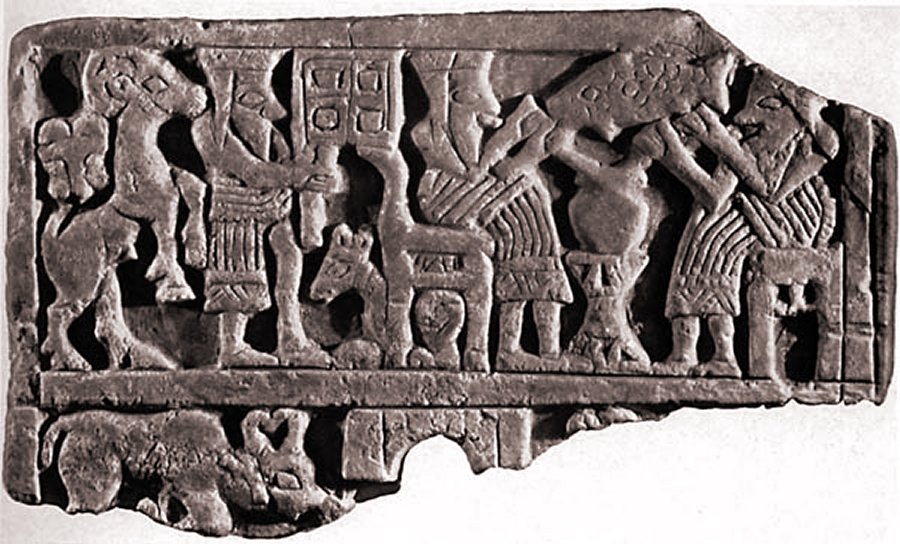 In one of the trenches, archaeologists discovered two large temples; one was the temple of Inanna, goddess of love and war, one of the most important deities in the Mesopotamian pantheon and another, the Temple of the North – the remains of the palace, the temple library, which provided 20 thousand tablets and tombs, where the dead were buried after partial burning.

The excavation conducted in 1990 revealed an Akkadian tomb and a large temple to Bau (Gula), the Mesopotamian goddess of healing and medicine, whose special symbol was a dog.

Among various artifacts, there were several figurines of dogs found on floors, and buried in the plaster on walls; fragmentary figurines of human beings having pain; one with his hand to his throat, another with one hand to his head and one to his stomach.

Kriwaczek, Paul. Babylon: Mesopotamia and the Birth of Civilization