A. Sutherland - AncientPages.com - Fire has played an important role in human life since the dawn of history. 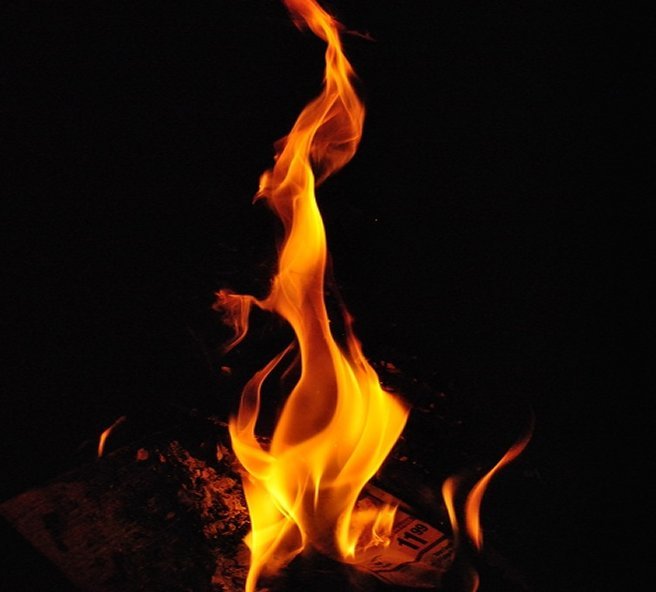 Fire may symbolize the flames of the sun, which itself has qualities of warmth, light, and creative power. Due to these qualities is thus equated with life force and masculine creative strength and generally, an incredible life force within a human being. It was a signal of vigor, strength and psychic energy.

Fire In World's Religions And Myths

Fire has been used in religious rites and symbolism for hundreds of years; with the main image of the smoke from the fire disperses into the heavens.  Associated with the sun, fire is purifying and/or destructive, reveals spiritual power and therefore has played an important role in main rituals and religious ceremonies throughout the world.

In Hindu beliefs, Agni is a powerful Hindu god of fire, and one of five sacred elements of which all living creatures are comprised is fire. Fire is considered an eternal witness essential to sacred religious ceremonies. In Christianity, fire is a symbol of the Holy Ghost and is often used in countless descriptions of Hell.

In the Zoroastrian religion, the Creator made the whole world of fire, water, and earth, and all-nourishing ether. Fire is continuously used to represent Ahura Mazda - God of the Zoroastrians, including the fire at Yazda, which has been burning for over two millennia. 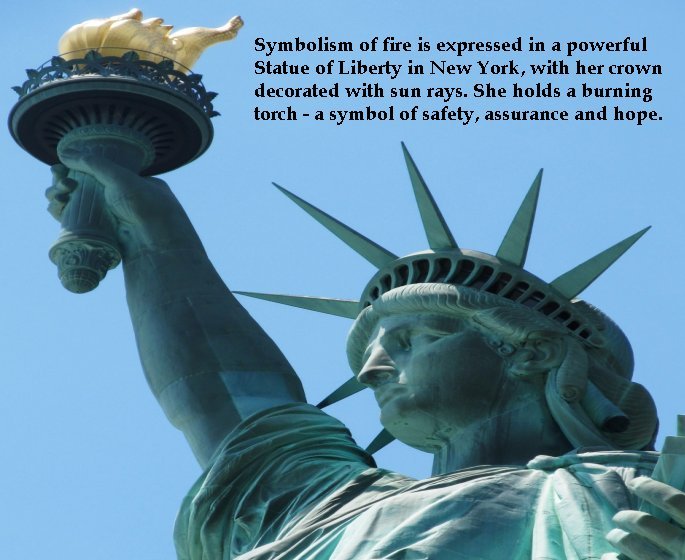 The creator gods in myths of many ancient cultures possessed these very qualities and were therefore linked to the sun.

The fire was important for agriculture; it was common to use fire in various rituals, in which torches, bonfires, burning embers, and even ashes were considered capable of stimulating the growth of the cornfields and the well-being of man and of animals.

Fire In Alchemy And Astrology

In alchemy, fire is associated with the chemical element of sulphur (sulfur) and its symbol is an upward-pointing triangle. In ancient Europe, learned chemists talked about fire as a 'transmutation factor' because they believed that all things exploded from the fire and returned to the fire. The alchemists have an important concept of fire as ‘an Element which operates in the center of all things’, as a unifying and stabilizing factor.

One of the most important alchemical symbols is an amazing mythical firebird, Phoenix, a symbol of Sun, immortality, rebirth through the fire, and eternal life.

Paracelsus, an alchemist, physician, astrologer, and occultist demonstrated the parallel between fire and life, pointing out that-both must feed upon other lives in order to keep alive.

In astrological "wheel of fortune", fire signs are energetic and full of force.

Fire As One Of The Four Elements

Fire, accompanied by water, earth, and air was recognized as the four primary elements by Aristotle and Plato and by a Greek philosopher, Heraclitus of Ephesus (c. 535 BC - 475 BC).

In his Dictionary of Symbols” J. E. Cirlot says that in Egyptian hieroglyphics, fire is also related to the solar-symbolism of the flame, and linked with the concepts of life and health as it originates from the idea of body-heat. It is also allied with the concept of superiority and control (19), showing that the symbol had by this time developed into an expression of spiritual energy.

In Heraclitus' system, the cosmos refers to as "everliving fire". Heraclitus equates fire with God/Zeus as the divine ruling order saying: "thunderbolt steers all things" alluding to the directive power of fire, an important element being the origin of all things but at the same time, it is the most inconstant and changeable. Heraclitus observed that all things are exchange for fire, and fire for all things. Fire changes into water and then into the earth; earth changes into water and then into fire.

Fire In The Bible

In the Bible, fire is part of the revelation of the Deity.

When God revealed himself to humanity, the event was accompanied by fire. When we burn the lamps and candles on the day of the dead and pray, our prayer is a symbol of admitting the dead to the eternity of light, because fire symbolizes light.

In the Apocalypse of St. John, The Apostle, it is a punishing fire in which sinners will burn’ and

8:5. says: “And the angel took the censer and filled it with the fire of the altar and cast it on the earth: and there were thunders and voices and lightnings and a great earthquake.”

Fire is often presented by artists as purification. A painting by the English painter John Martin from 1852 is entitled "Destruction of Sodom and Gomorrah". 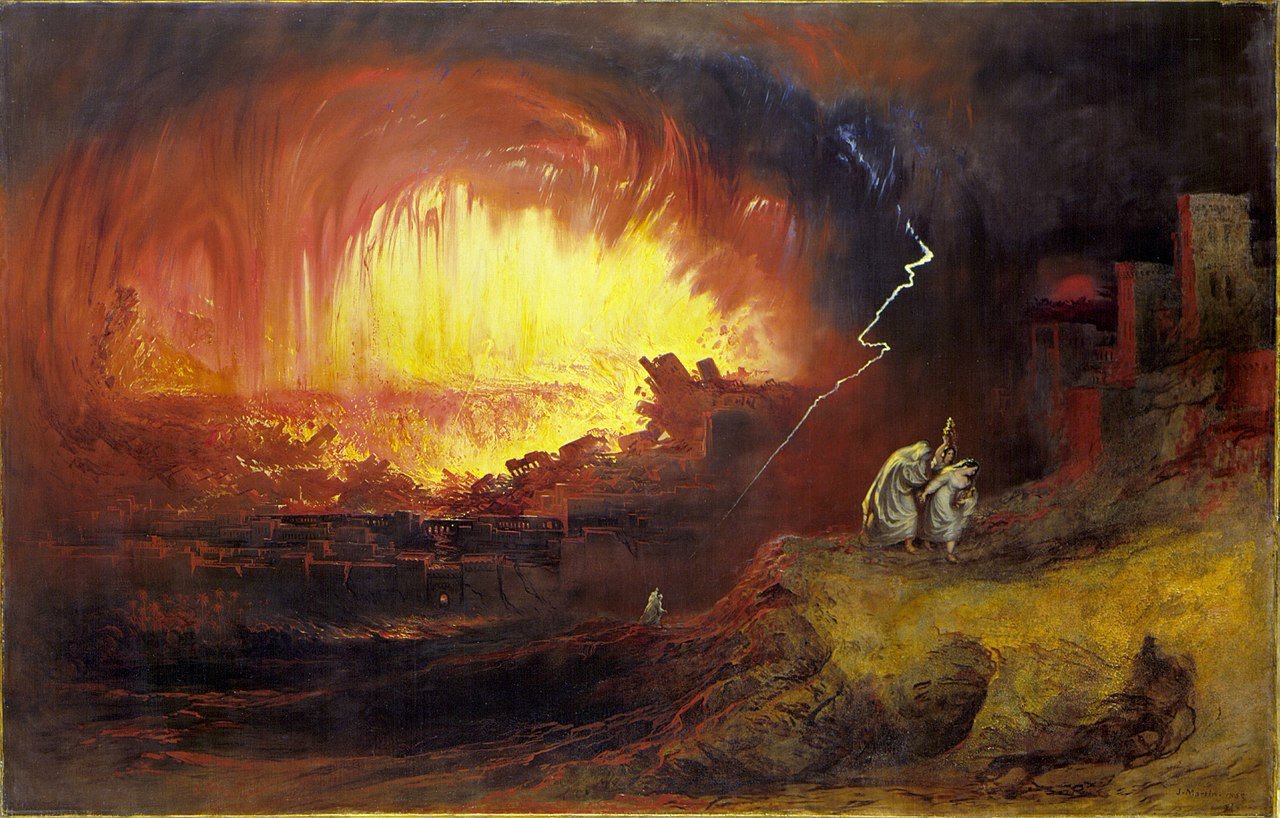 The Destruction of Sodom And Gomorrah by John Martin

It shows the biblical story of the destruction of the two cities of Sodom and Gomorrah. The act of destruction was committed by God who used rain of sulfur and fire from heaven to punish people for their wickedness and uncontrolled debauchery. In this case, the painter used the fire to symbolize punishment, unconquerable destruction, and misfortune.

It is believed that fire is a symbol of evil and unhappiness and bright flames of fire represent new thoughts or passion and sexual desire.

Undoubtedly, the fire has long been and one of the greatest inspirations of people especially including artists and perhaps madmen.

Paracelsus. The Hermetic and Alchemical Writings of Paracelsus