A. Sutherland - AncientPages.com - The Gordian Knot is a metaphorical expression that means a complicated problem or deadlock when we have an unsolvable problem, which is our “impossible knot”.

It has its beginnings a long time ago, when the Phrygians had no ruler and they plunged into a civil war, an ancient prophecy of the oracle was announced at Telmissus (the ancient capital of Lycia).

Alexander the Great slicing the Gordion knot with a sword-stroke.

It said that the new king would be the one who would enter the city in a simple ox-cart.

The first through the gates of the city was Gordias, a poor peasant who with his wife came to the city with a cart drawn by an ox. Gordias was declared king and his grateful son, Midas dedicated the ox-cart to the Phrygian god Sabazios (identified with Zeus). He tied its yoke to a post with an extremely sophisticated knot called the Gordian Knot.

The knot was later described by Roman historian Quintus Curtius Rufus as a masterwork. It comprised of “several knots all so tightly entangled that it was impossible to see how they were fastened.” 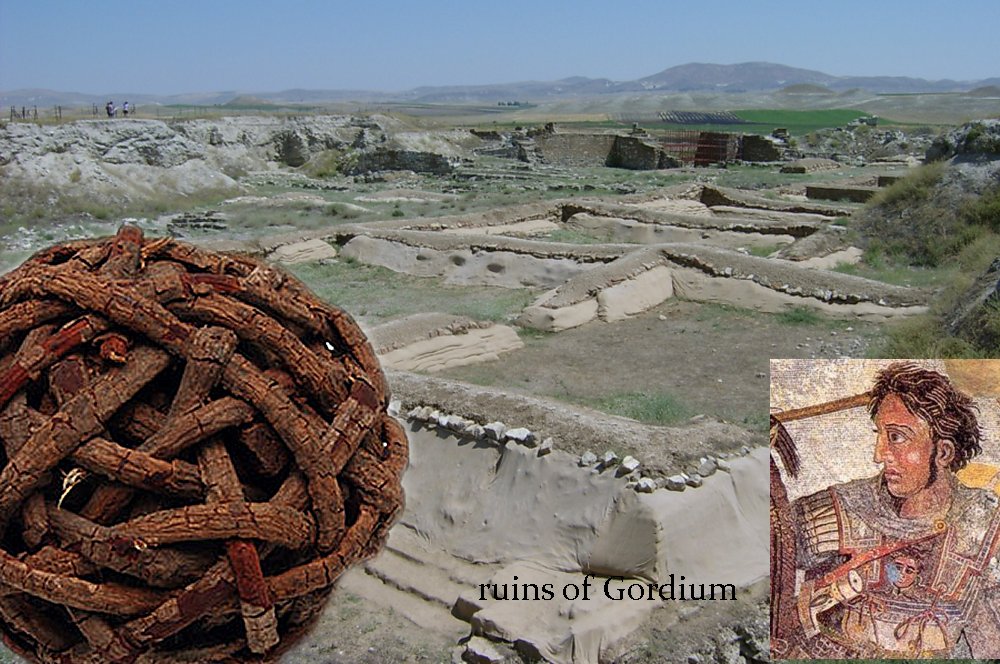 Gordias founded the city of Gordium, which became the Phrygian capital, and his ox-cart was preserved and remained in the royal palace. According to the prophecy of the oracle, a man who untied the knot was to receive power over Asia Minor or even all of Asia.

In the 4th century BC, Alexander the Great reached Phrygia and Gordium, which was allegedly the capital of Midas. After taking the city of Gordium, Alexander was shown the chariot of Gordias, founder of the old Phrygian monarchy, and was told about the prophecy.

Alexander wanted to untie the knot but he had no idea how to do it, so he drew his sword and sliced it in half with a single stroke or as another version says, he loosed the knot by pulling the linchpin from the yoke.

Aristobulus, an early historian, architect, military engineer as well as a close friend of Alexander) later claimed that untying the knot was easy for Alexander; he removed what they call the pole-pin, with which the yoke-knot was held together, and then drew back the yoke.

We will never know what really happened in the palace in Gordium and whether Alexander managed to untie the complex knot.

Norman F. Cantor in his book "Alexander the Great Journey to the End of the Earth" writes:

"Shortly after one of Alexander’s first victories, the Battle of Granicus, he learned that a few miles away a certain King Gordias had left as a legacy a very difficult knot to untie. It was said (probably by Alexander’s propagandists) that whoever untied the knot would conquer all of Asia. Sources disagree about what happened.
Some say that Alexander cleverly untied the knot, others that he simply unsheathed his sword and cut it. But one way or another he untied or “cut the Gordian knot.” Fox relates the tale this way: On the day before leaving Gordium he went up to the acropolis meaning to try the chariot which he had saved for his farewell; friends gathered round to watch him, but hard though he pulled, the knot round the yoke remained stubbornly tight. When no end could be found, Alexander began to lose patience, for failure would not go down well with his men.
Drawing his sword, he slashed the knot in half, producing the necessary end and correctly claiming that the knot was loosed, if not untied. The aged Aristobulus (one of Alexander’s early historians)…later claimed that Alexander had pulled a pin out of the chariot-link and drawn the yoke out sideways through the knot, but the sword-cut has the weight of authority behind it and is prefer- able to an eighty-year-old historian’s apology; either way, Alexander outmaneuvered, rather than unravelled, his problem.
He also managed to arouse an interest in what he had done. 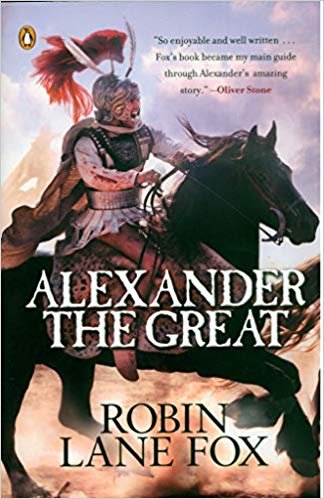 Tough, resolute, fearless. Alexander was a born warrior and a ruler of passionate ambition who understood the intense adventure of conquest and of the unknown. When he died in 323 B.C.E. at age thirty-two, his vast empire comprised more than two million square miles, spanning from Greece to India. His achievements were unparalleled—he had excelled as leader to his men, founded eighteen new cities, and stamped the face of Greek culture on the ancient East. the myth he created is as potent today as it was in the ancient world.Robin Lane Fox's superb account searches through the mass of conflicting evidence and legend to focus on Alexander as a man of his own time. Combining historical scholarship and acute psychological insight, it brings this colossal figure vividly to life. Read more

“There were thunderclaps and flashes of lightning that very night,” conveniently signifying that Zeus approved, so Alexander offered sacrifice to the “gods who had sent the signs and ratified his loosing of the knot...” ” (Robin Lane Fox, Alexander the Great)

Alexander later went on to conquer Asia as far as the Indus and the regions of the Oxus, a major river in Central Asia. The prophecy was fulfilled.