A. Sutherland  - AncientPages.com - Legendary weapons are mentioned in countless myths and legends in the course of human history. Warriors and invincible heroes used magical weapons with supernatural powers.

Some of these weapons could heal or make their owners/holders – invulnerable; others had dangerous power to annihilate. 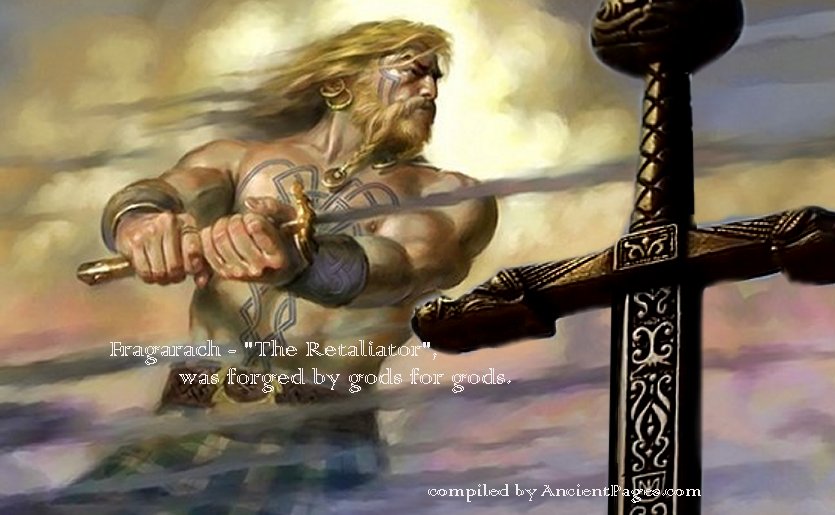 One of the most amazing weapons with extraordinary supernatural powers was Fragarach known as "The Retaliator", which was forged by gods for gods.

The sword had several names including such as "Whisperer" and "Sword of Air", and was one of several magical gifts that Lugh took with him from the Land of the Living.

In addition to a terrible sword called Fragarach, Lugh had “the Boat of Mananan, son of Lir the Sea God, which knew a man's thoughts and would travel wherever he would, and the Horse of Mananan, that could go alike over land and sea.

“So equipped, he appeared one day before an assembly of the Danaan chiefs who were met to pay their tribute to the envoys of the Fomorian oppressors; and when the Danaans saw him, they felt, it is said as if they beheld the rising of the sun on a dry summer's day. Instead of paying the tribute, they, under Lugh's leadership, attacked the Fomorians, all of whom were slain but nine men, and these were sent back to tell Balor that the Danaans defied him and would pay no tribute henceforward. Balor then made him ready for battle, and bade his captains, when they had subdued the Danaans, make fast the island by cables to their ships and tow it far northward to the Fomorian regions of ice and gloom, where it would trouble them no longer…” 1

In Irish mythology, Manannan Mac Lir a powerful magician and god of the sea was an owner of a flaming helmet that dazzled his enemies, an invulnerable armor, a cloak of invisibility (féth fíada), a self-propelling boat named Scuabtuinne ("wave sweeper"). He also forged Fragarach from a frozen wave and gave it the ability to break through the walls of enemy fortifications.

Manannan wielded this weapon before passing it on to Lugh (his foster son).

Is Mysterious And Powerful Vajra One Of The Most Dangerous Weapons Of The Gods?

Superior Sword Of Goujian: Jian Weapon And Legend Of Immortal With Good Advice

Later, Fragarach was given to Cuchulainn by Lugh, and finally to Conn of the Hundred Battles, a legendary High King of Ireland, according to medieval Irish legendary sources.

The sword Fragarach was not any normal sword usually encountered in battle. No armor could stop it, and the fire was coming from the tip of that deadly sword that could cut through any shield or wall, wood, metal, and bricks, and inflict piercing wounds from which no man could recover.

This kind of weapon could be one of the weapons of the Tuatha De Danann, god-like beings with supernatural abilities, but it is not mentioned among the four magical treasures of Ireland - Lia Fail (the Stone of Destiny), 'Invincible Spear' of Lugh, 'Shining Sword' of Nuada, and the magical, bottomless cauldron of the god Dagda, the ancient god of the earth and a powerful leader of the Tuatha De Danann.

Another name of Fragarch was the 'The Answerer' because no one could move or tell a lie with Fragarach at his or her throat. It means that Fragarach could force a person to answer questions in one way only - truthfully.

Macculloch J.A. The Mythology of All Races Vol 3