Conny Waters - AncientPages.com - Residents of an 8,000-year-old prehistoric proto-city could be buried in the houses where they lived, according to new research.

The gruesome discovery was made by a team of Polish researchers with Dr. Katarzyna Harabasz, assistant professor at the Department of Archaeology of the University of Szczecin, after studying the famous ancient archaeological site Çatalhöyük. 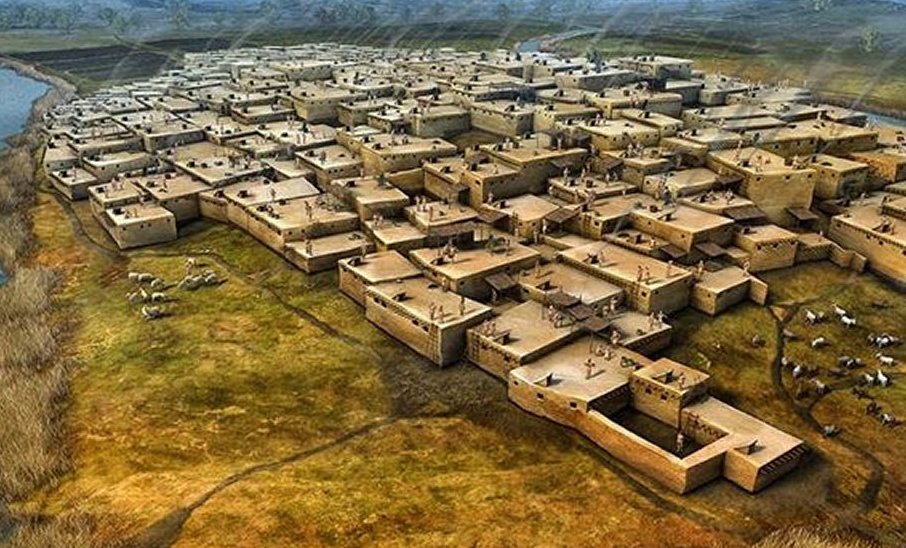 Çatalhöyük - the site measures 13 hectares (about 32 acres) with nearly 21 meters of deposits spanning 1,150 years of continuous occupation. Çatalhöyük (first excavated in 1958)) began as a small settlement and later played an important role as a farming community.

Çatalhöyük is one of the most famous archaeological sites in the world. Located in the southern part of the Anatolia in central Turkey, it was inhabited without interruption for over a thousand years between 7100 and 6000 BC.

It is thought that during the period of greatest prosperity several thousand people lived in the densely built-up settlement on several dozen hectares.

As a rule, researchers of particular specializations focus on one specific issue and rarely try to get a broader vision of prehistoric people and their way of life.

But in this case, Dr. Harabasz and her team looked at not only the analysis of particular skeleton bones but also analyzed the place of their burials.  Some of the remains studied were discovered in a house that was used in 6700-6500 BC. At that time, the dead were buried in many households - this was the custom.

However, until now it was unclear whether the remains were of people who lived in the same houses or whether they were houses specifically intended as burial sites for a sufficient number of local residents of nearby houses.

The researchers found that in the remains of the deceased woman (35-50 years old at the time of her death), traces of organic soot were detected.

“This suggests that during her lifetime the woman inhaled the fumes from the hearth, which caused carbonosis. Long-term exposure of the body could lead to changes in the lung tissue, which resulted in respiratory failure," Dr. Harabasz said, adding that “in the household where we discovered the remains, the hearth was in a place that prevented good ventilation. It may, therefore, indicate that the deceased was buried in her own home.”

This condition was probably not an exception in the settlement. The houses were to each other and communication took place over the roofs. From a bird's eye view, the settlement looked like a honeycomb. Therefore, efficient ventilation of the rooms was not possible.

The dead were placed in shallow cavities, which were then covered and their surfaces plastered.

Archaeologists often find unnaturally shrunken corpses, which in their opinion may be related to the manipulation of the remains after death. The bodies were probably subjected to unspecified procedures even before being placed in the burial cavities.

“There are known cases when a grave was reopened to retrieve some parts of the body. In some buildings, funeral activities were regularly repeated in the same place, which resulted in the relocation of the previous deceased people,” Dr. Harabasz said.

She also found that the woman who died in the building was 154 cm tall and her main occupations were spinning and making baskets and mats.

“This hypothesis is confirmed by anthropological analyses showing the wear of the front upper teeth, which show traces of holding a string, rope or organic materials by the upper jaw,” she said, adding that the woman had suffered a trauma during her life. Healed damage is visible on the forehead.

During the period, in which the deceased lived, the settlement was inhabited by the largest population in its history. It is known from other studies that the natural environment was over-exploited around the settlement. This probably caused food shortages, because some of the deceased suffered from scurvy or osteoporosis.

In turn, bone studies show that men were more mobile, they traveled long distances and grazed animals, as evidenced by the higher number of joint injuries compared to women.

The archaeological site of Çatalhöyük was added to the UNESCO World Heritage List in 2012. The first excavation work in Çatalhöyük was carried out by James Mellaart in the 1960s. The research was resumed only in 1993, since then until 2017 the international team was headed by Professor Ian Hodder from Stanford University. Polish mission from the University of Adam Mickiewicz in Poznań has been active there since 2001, currently in cooperation with the Museum in Konya.