A. Sutherland  - AncientPages.com - The Lengyel culture that developed in southern Europe was initially linked to the site of Lengyel in Tolna county, in the southwestern part of Hungary. 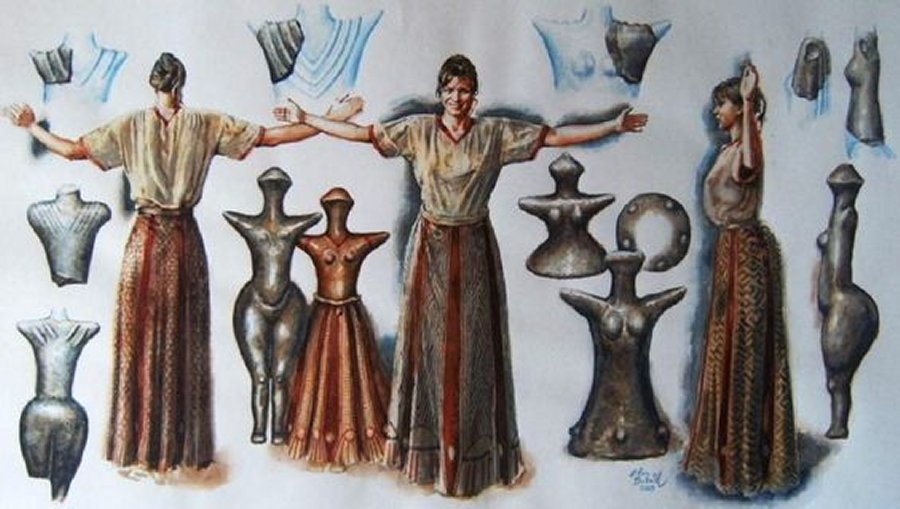 The Lengyel culture dates to ca. 5000 - 3400 BC, was the eastern successor to the Linear Ware culture. The settlements belonging to them were found in present-day Moravia (Czech Republic), Western Hungary, Western Slovakia, Southern Poland, and adjacent parts of Austria, Slovenia, and Croatia.

The society was engaged in agriculture, raising of animals like pigs, sheep and goats, hunting and fishing, cultivation of wheat, barley, and leguminous plants like lentils, peas.

Settlements of the Lengyel culture were large, widespread, and built on the river terrace, surrounded by V-shaped ditches and fences of buildings. 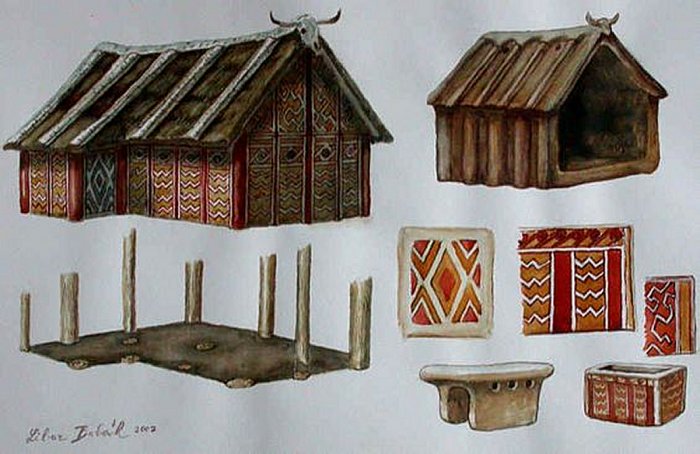 For their protection, the people constructed defensive fortifications (often only on one side of the settlement).

Early Lengyel culture was associated with circular earthworks of late Neolithic Europe known as (the 'roundels' or 'rondels'), where the ritual activities took place according to ancient traditions of these people.

The roundels (from 35 to 150 m in diameter) were considered their temples.

However, excavations carried out at many different sites of the Lengyel culture exposed the large enclosures that probably served only for ceremonial purposes because they lacked burials and pottery remains.

Not long ago, more than 130 roundels have been located in Europe, a third of them in Austria. The rest are in today's Hungary, Slovakia, Poland, the Czech Republic, and Germany. Currently, there are now ten known roundels, which are considered the oldest examples of monumental architecture in Europe. 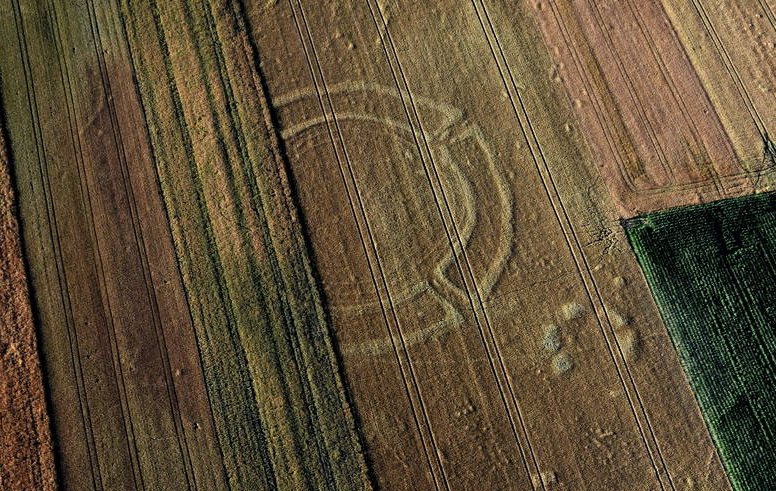 "A ditch that had four gates oriented in the cardinal directions formed the outer boundary of the monument; the enclosed area measured 145 by 125 meters. A roundel in the center of the ditch measured about 50 meters in diameter. It consisted of several poles set inside another ditch, and each of them opened to the four directions.

Excavations revealed an abundance of ritual evidence. They uncovered 314 early Lengyel-style figurines, inside the central roundel and the rest either outside of it or in the outer ditch. 1

The findings also included a sculpture of a goddess about forty centimeters tall, and ceramic vases painted in red, yellow, and white colors, and a human skull.

Another pit, on the other hand, contained a skeleton of a young woman buried in a contracted position. Her skull had been removed and buried under the wall of a grain pit. The Lengyel religious traditions are not precisely known; therefore, it is hard to say if the woman was buried in honor after natural death or ritually sacrificed during harvest rites. 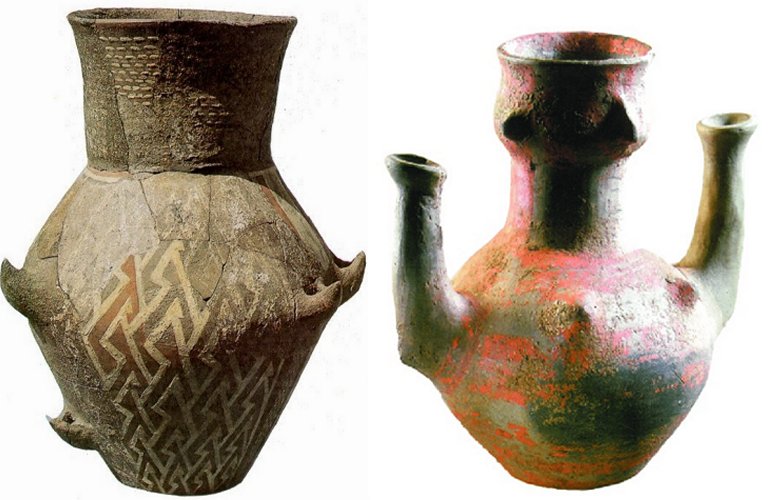 The deceased were buried in various ways. In the early period, the dead were not buried in the cemetery; this tradition appeared later. Sometimes their body parts (arms, legs, head) were separated and placed next to them, along with a boar or pig's lower jaw or fangs.

Triangular and trapezoidal burial mounds were found in southern Poland.

According to the Lengyel burial tradition, the group graves were located in large cemeteries or within settlements. Their equipment included vessels, stone tools, decorations, products made of bone, horn (horn axes), jewelry (bone beads, and beautiful geometrically decorated bone bracelets) and copper. 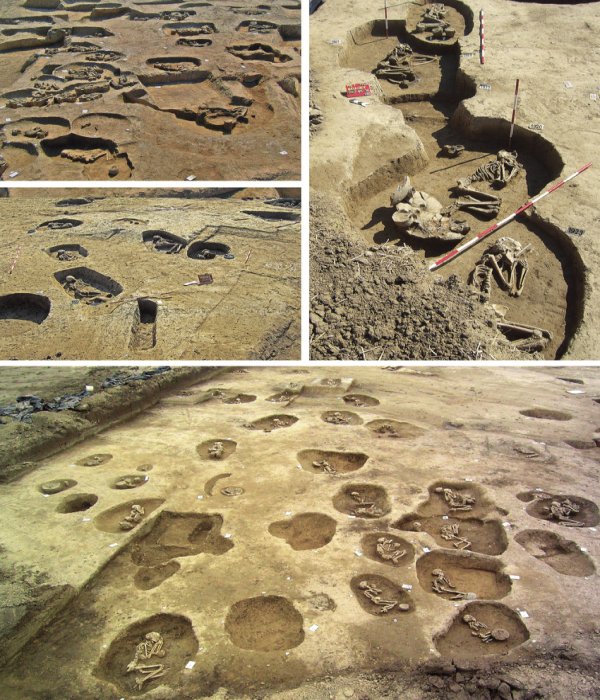 Lengyel culture grave groups. The Neolithic settlement of Alsónyék reached its greatest extent during the Late Neolithic Lengyel period. Nearly 9000 features, including postholes associated with 123 houses, pits and pit complexes, and ca. 2300 burials, could be assigned to it. The traces of Lengyel settlement and burials were found over the entire excavated area. Image credit: Alex Bayliss/ResearchGate

"Men were buried with tools and other artifacts suggesting trades and mining, like stone axes and hammer-axes made from antler and with nodules of flint and obsidian. The latter were mined in the nearby Carpathian Mountains.

Who Were The Goths And Where Did They Come From?

"Tool kits for decorating pottery were found in several graves. But the types of artifacts found in male graves versus female graves are not subject to a strict division of labor." 1

In some cemeteries, archaeologists found quern stones, axes, chisels, or copper and shell jewelry in both male and female graves.

Women played an important role at home and in the religious traditions of the society. Many luxurious grave goods were unearthed in women's and young girl's tombs.

The Lengyel culture was not a complex society. Yet, they possessed an understanding of geometry, which can be seen in the culture's pottery remains, geometrically decorated bracelets, and the way they built their roundels and ditches as well.