A. Sutherland  - AncientPages.com - This intriguing image carved into a huge rock face must be very old but no one knows how old it is.

The rock itself is shaped like a pyramid, more than 15 meters (49 feet) high. According to local records found in the town's administration, the pyramid along with the mysterious face was already there from before the city was found. 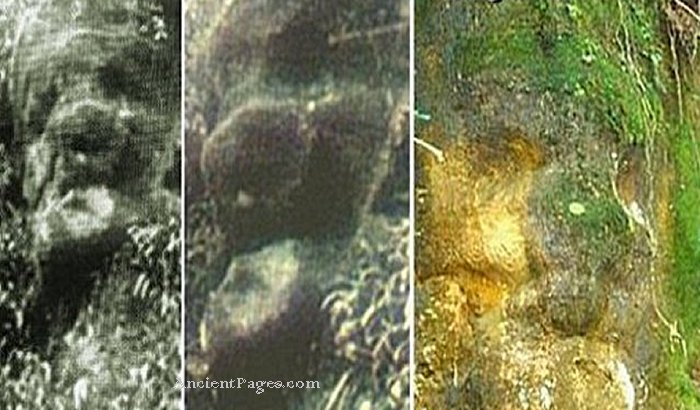 Not far, just 4 km from Monte Alto known for its prehistoric figures with magnetic properties, there was once (today destroyed) another artifact, which was unfortunately never explored.

It was a mysterious gigantic, at least 30 feet (9 m) head with very beautiful features discovered in the Guatemalan jungle. Its lips are thin, the nose is large and sharp and the eyes, what is perhaps most intriguing, are closed. The face carved in stone does not possess the facial features of the Maya or any of the other people known to have populated the region.

Why did someone want to carve this face? Was he a god-like figure or a giant perhaps?

What was his connection to ancient people humans?

The head is not similar to the Olmec's carved heads. Is this an anomaly of the Olmec period or is it part of another, unknown culture that predated or post-dated the Olmecs?

The Popol Vuh, the sacred book of the K'iche' Indians of Guatemala, refers to the "first race of men", those "before the flood", who possessed all knowledge, studied the four points of the horizon and all secrets of the sky because their astronomical knowledge had no limits.

Monte Alto culture, one of the oldest in Mesoamerica, inspired and showed its followers like Olmec and Maya, the way to continue and the Monte Alto's legacy must have originated from the ancient astronauts, the teachers of mankind. 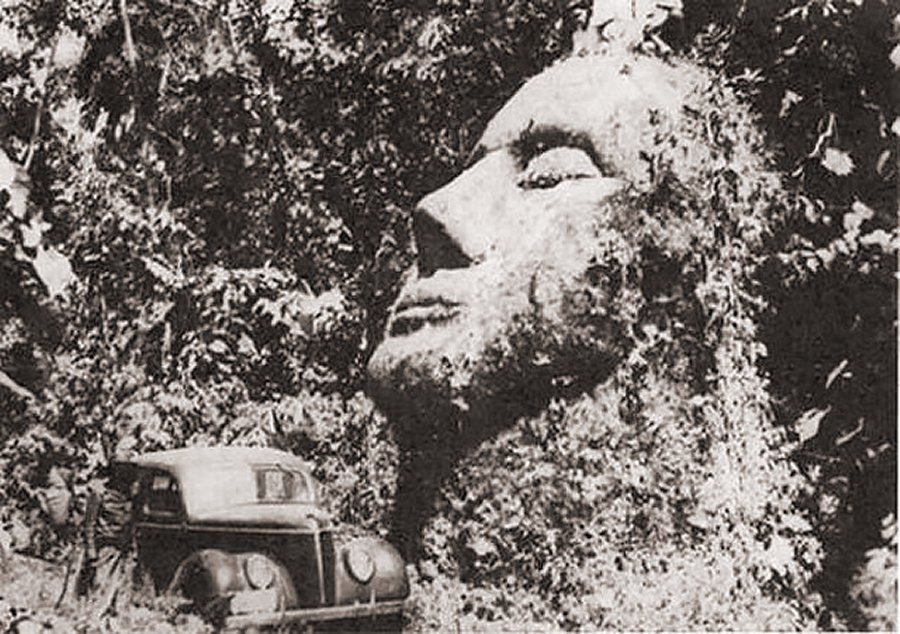 Another enigmatic place that keeps its secrets is Yonaguni-jima, Japan, with ancient structures, resting 60 to 100 feet beneath the ocean surface. They are composed entirely of solid rock (sandstone) deposited approximately 20 million years ago. Researchers found no separate blocks of rock that have been additionally placed into position.

There is also an unknown face depicted on a large monolith hidden among many other ancient underwater structures discovered in the area. It's most probably man-made and very old as all other ruins surrounding this monolith.

In his book "Underworld: The Mysterious Origins of Civilization", Graham Hancock describes the monolith human head as follows:

"A large monolith that looks like a human head with two eyes and a mouth was studied at Tatigami Iwa Point ("The Standing God Stone"). A human-cut large platform in the same monolith extends outwards at the base of the head. An approach way leads to this platform from the shore side. The surrounding basal platform is quite large (about 2500 square meters), and could easily have accommodated more than two thousand persons sitting...
The human head and associated platform might have served as an area of worshipping or community gatherings..."

Facial features of this mysterious stone head are still clearly discerned. The carved face is about 7 m high and has deep-set eyes, a mouth hacked and a high bridged nose. The bulk of the nose was most probably lost due to an earthquake that shook the bottom of the ocean as Yonaguni is located in an earthquake-prone zone, often exposed to seismic events.

According to Hancock, "face formation" manifests a combination of peculiarities. For it is not just a face - or something that looks like one - but a grim and scary face, which seems designed to overawe, carved with care and attention to the lines and flow of the base rock.

Mystery Of Sacred Groves Of Oshogbo And Its Remarkable Ancient Figures

Moreover, far from appearing haphazardly with no context, as one would expect with an accidentally formed natural "face", it seems framed within a deliberate ceremonial setting. Thus, a horizontal platform just under 2 meters high and 5 meters wide - called by local divers the "Stone Stage" opens out from the side of the face at the level of the mouth and runs along to the back of the head where a narrow passageway penetrates the whole structure from west to east..."

The "Face", therefore, has to be viewed together with its "Stone Stage", as a single rock-hewn edifice, and the flat area out of which the Stage and Face rise is easily large enough to have accommodated thousands of people before sea-levels rose to cover it..."

Whose face is depicted on the monument? Were these empty eyes looking at a panoramic view of an ancient city, at a time when the whole area was above sea level?

Later, groups of hieroglyphs were discovered near the giant human head statue. This indicates the builders of the undersea ruins were a highly advanced civilization.

Could Yonaguni have been built by a highly sophisticated civilization that originated from a legendary Mu and was wiped out by a cataclysmic event that occurred thousands of years ago? It also could be remnants of the lost land of Lemuria.