Jan Bartek – AncientPages.com – Monkey God Hanuman is an important deity in Hindu mythology and one of the central characters of the Indian epic Ramayana. Hanuman is a patron god of martial arts, and sometimes considered a symbol of a symbol of nationalism and resistance to persecution.

Together with Ganesha, the elephant-headed God of knowledge, learning, Literature, and scribe of the Mahabharata, monkey God Hanuman is said to be one of the threshold gods, on the border of the material and spiritual realms. 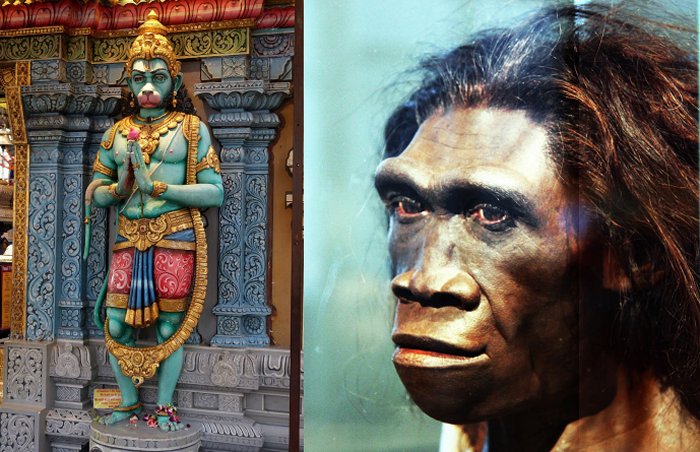 Hanuman is a beloved Hindu deity, but is there any reason to think the monkey God was a real being or only a mythological creature?

An Indian scientist who examined the Hindu epic Ramayana has presented a rather unusual theory suggesting that Hanuman belonged to an extinct human species. If this assumption is correct, perception of the monkey god Hanuman would change radically but where does the evidence come from and how is it assessed and used?

Dr. Rangan Ramakrishnan is a scholar of the Ramayana and literary historian who has recently published a book called The Ramayana of Valmiki. The Indian scholar explains that the story of the Ramayana could be of immense importance to our understanding of ancient history and paleontology.

“If one reads the original Ramayana without the influence of succeeding vernacular versions, which emerged at least several centuries after Valmiki, Vanaras like Hanuman are referred to as a distinct species altogether

Like other human species, they speak fluently and they inhabit a distinctive culture," Dr. Ramakrishnan says.

“Vanaras in Valmiki’s work have tails and ape-resembling faces. So, they’re taken as mere monkeys in later scriptures, but that needn’t be the case,” said Dr. Ramakrishnan.

“As new fossil findings regarding various Hominids emerge, it’s certainly pertinent to see them in the prism of a class of human species.”

According to a recent study, the last Homo Erectus lived 117,000 years ago at Ngandong, the Indonesian island of Java.

Before vanishing, Homo Erectus came in contact with many other different species, and he is believed to be one of our closest ancient ancestors.  Homo Erectus was the first of our relatives to have human-like body proportions, with shorter arms and longer legs relative to its torso. Many scientists propose Homo Erectus was the direct ancestors to several human species, such as Neanderthals, Denisovans, and modern humans.

But how could Homo Erectus have something to do with the Hindu monkey god Hanuman? Many scientists who heard Dr. Ramakrishnan’s theory have mixed feelings about this alleged ancient connection.

Why Are Statues Of Mythical Yeti Dividing People In The Himalayas?

In recent years, we have learned more about Homo Erectus but we still don’t know for sure why the species went extinct.

“Ramayana is perhaps the only literature to speak about a variety of human species offering to fill an important gap in human ancestry and evolution through literary support,” said Dr. Ramakrishnan.

“Interestingly, the protagonist Lord Rama corresponds to the sapiens, other ‘Vanaras’ loosely match Homo erectus, while the villain Ravana and his ‘Rakshasas’ clan are mostly consistent with the description of Homo Neanderthals.

“Are these striking similarities mere coincidence? Or shouldn’t we take it more seriously?

Scmp reports that American palaeoanthropologist Russell Ciochon is skeptical to this theory and remarks there are noticeable dissimilarities between Vanaras and Homo erectus that are not so easily explained.

“There is some evidence that Homo erectus may have had protolanguage, but the species would not be as well-spoken as Hanuman,” said Ciochon, a professor at the University of Iowa, who led a team of researchers in a groundbreaking study in Indonesia last year which found that Homo erectus had survived for just over 100,000 years.

“Homo erectus did not have a tail or the distinctive cheek pouches that Hanuman is often illustrated with.” 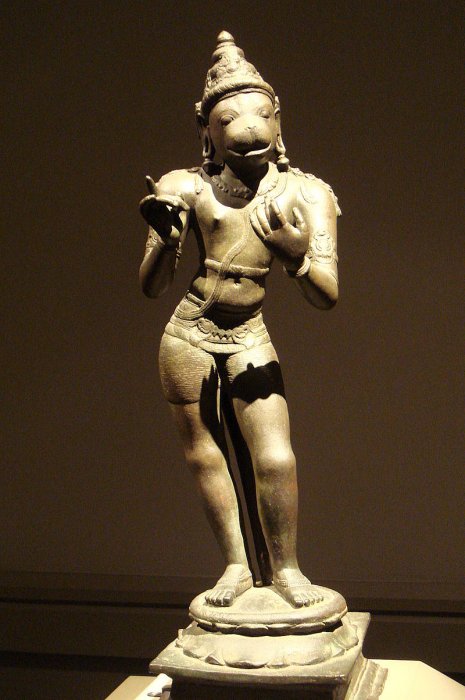 Hanuman is a Hindu God of strength, celibacy, knowledge and Bhakti; Lord of victory, supreme destroyer of evil,
and protector of devotees. Credit: Phgcom, CC BY-SA 3.0

It’s worth adding that in his new book, Dr. Ramakrishnan also discussed the neglected subject of animal equality.

“In a massive epic of more than 20,000 verses, there’s not even a single context in which a particular species is degraded or mentioned as inferior to humans,” he said. “It’s quite common in any story for a character to scold another as ‘pig’ or ‘dog’ or ‘donkey’. But this idea is absent in Ramayana.”

Building on that, he said: “There should be a point of time in the natural selection process where the sapiens never felt superior to subjugate other species. The Ramayana-story of Valmiki likely belongs to that age.”

“If the society of Ramayana did not consider animals inferior to humans, then why ask of discrimination among humans?

The age of Ramayana did not consider one particular class or caste of sapiens as inferior to few others – a remarkable societal characteristic which is hard to find in any voluminous literature in the world,” said Ramakrishnan, adding that these attributes help map the distant past as he explained the antiquity of the Ramayana placing the epic within the realms of the existence of H. Erectus and Hanuman.

New controversial theories, like the one presented by Dr. Ramakrishnan are often treated with suspicion. The thought that a Hindu monkey God such as Hanuman may have been a member of a long-extinct species may be hard to accept, but perhaps the Indian scholar did address an important question by asking whether some mythological creatures were real beings who still haven’t been identified, and perhaps never will be, but speculations are never wrong.