Miroslav Provod - AncientPages.com - Nikola Tesla once wrote: "The day when science begins to explore beyond physical phenomena, more will be discovered in a decade than over the centuries of its existence."

Photographs of incredible discovery can be found online by the use of search engines. On the mountain Shoria in southern Siberia, scientists have discovered a massive wall of granite stones.

Some of the huge granite stones weighed more than 3,000 tons and were built into the wall at a height of 40 meters.

Zahi Hawass presents a similar case: "Some of the tombs are recessed and covered with rectangular blocks of stone the size of several freight wagons or small houses."

He does not comment on it so it sounds as if it was an everyday occurrence. Under the current interpretation of science, the transport of three-thousand-ton rock blocks was performed by towing ropes. These were then hailed up to 40 meters high by an unknown way.

Unfortunately, this is an opinion of many other scientists and it can not stand up to rational considerations. Since the weight of one solid cuboid is 3,000 tons, which equals fifty to sixty-ton tanks, it precludes further discussion.

This crucial information requires attracting the interest of research students. It needs to be highlighted that current science is unable to explain the lack of information about the transport of oversized rocks.

The Granite wall on Mount Shoria will constantly remind researchers that people in ancient times had to solve the movement of rocks under the same natural conditions as those at present. The previously unseen features of one of the natural forces - the electric field, were creating a large obstacle to progress in many fields. 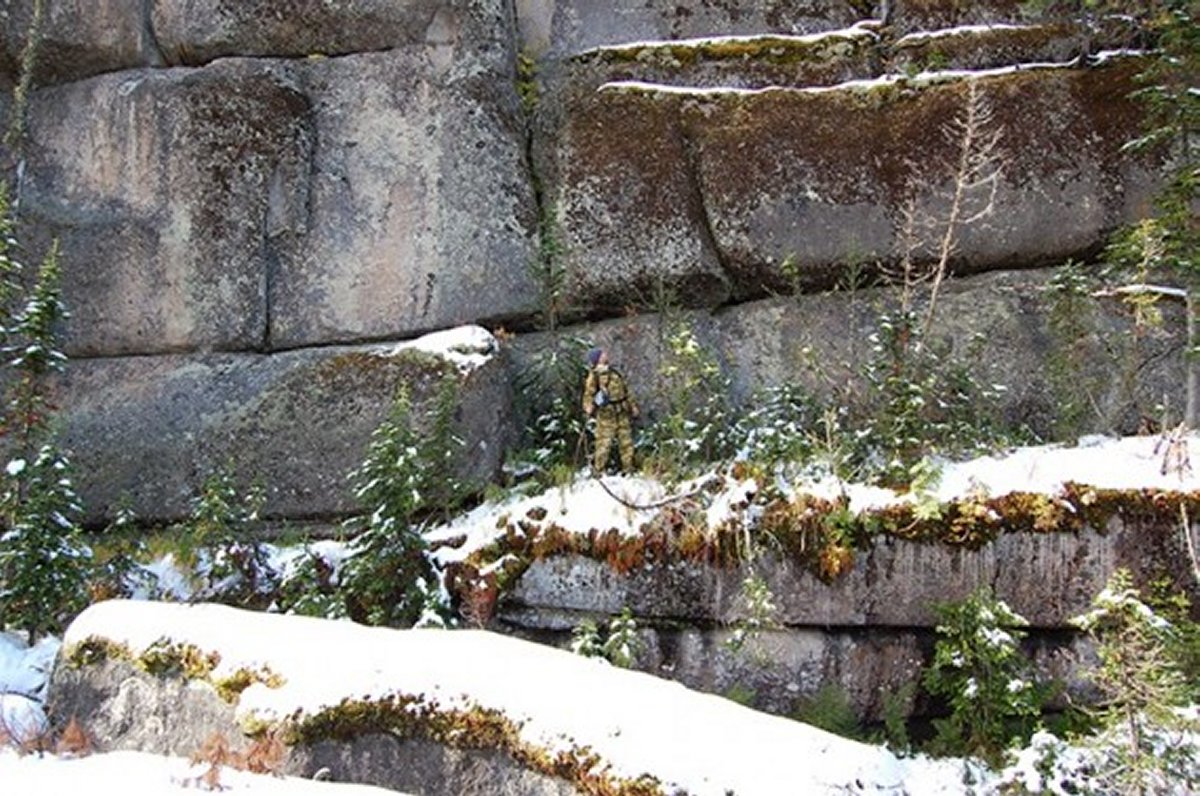 Mount Shoria: This massive wall of gigantic granite stones is veiled in the mists of deep antiquity.

I consider antigravity as an unknown property of static electricity, without which the transport of oversized rocks would be unthinkable. Isolated cases of people or matter floating weightlessly have been described in history, but are not widely discussed due to the lack of convincing justification. 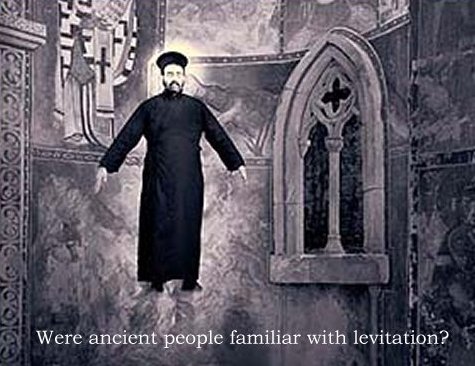 There are descriptions of people flying without the help of any technical device. A successful levitation has even been watched by the Emperor Francis I and his courtiers.

The unusual hero was a mystic Schindler, who claimed that he can raise himself weightlessly at any time for at least fifteen minutes.
The Emperor decided to investigate his claims. The testimony of the success of the test is preserved thanks to the free lord du Prel.

The Emperor decided to remove the chandelier in the high hall of the Imperial Castle and replaced it with a hundred ducats.

Schindler could keep it if he could get it without the help of any equipment. Schindler has struggled for about a minute as if he was warming up, but eventually managed to grab the money. Then he turned into a horizontal position by the ceiling and laid in space for a few minutes as if he rested after exercise. Finally, he slowly retreated back on the floor.

The Oregon Vortex is a circle that has a diameter of about fifty yards and exhibits anomalies the current knowledge of science can not explain. 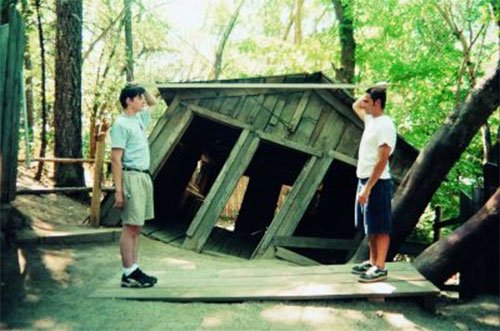 House of Mystery at Oregon Vortex

Tourists are amazed when they put a glass on a slippery slope and it rolls upwards. Another attraction is a fifteen-kilogram ball hanging on a chain. Visitors can see it hanging "from an angle," thereby denying the laws of gravity. The sphere is swaying so that it only approaches the centre of the circle. Anyone can push the ball to the centre quite easily, but it is much harder to swivel it to the edge of the circle.

Thousands Of Remarkable Megaliths On The Sumba Island

A similar anomaly is located in Italy near the Pope's summer residence at the village of Rocca di Papa. The law of gravity does not work for about a hundred meters of a local road. People stop and watch their cars and leave bottles and cans roll up the hill. Local youth are riding on a bike uphill without having to step on the pedals. It is easy to see how a car with the engine off slowly travels up the hill. Nuclear physicist Luciano Gelmi poured water on the tarmac and watched in amazement as the water flowed uphill. Such places are also located in Japan, Poland, Germany and Scotland.

Antigravity is not easy to believe, but the three-thousand-ton solid rock that was elevated to a height of forty feet leaves little doubt. I think it will be more useful to familiarize students with the unknown characteristics of Oregon circle than having them drag the statues of Easter Island. It would be equally useful not to try to make up justifications of unconfirmed experiments at any cost. 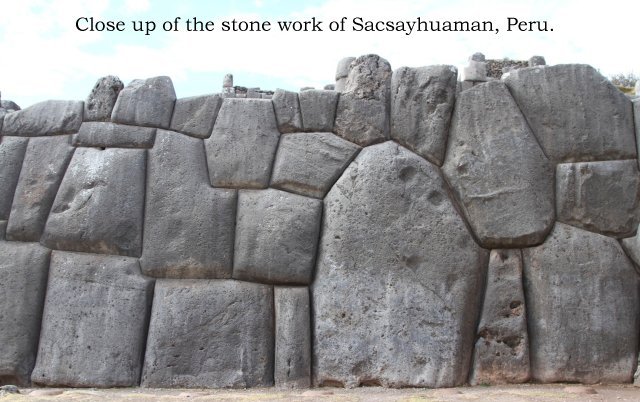 If you would like to work towards antigravity, it is necessary to realize the fact that the megalithic culture went through the history as a unified group from menhirs to the cathedral, with static charge being the base of matter. Anti-gravity didn't just fall from the sky, it was the result of the development of ancient civilization and we have to first get to know it. I believe that to gain knowledge about antigravity we first need to explain a wide range of prehistoric mysteries, like who was able to overcome the language barrier and construct very similar megalithic structures throughout the world.

Large concentrations of menhirs and dolmens in places such as the Golan Heights in Asia or the Caucasus Mountains indicate that, with regard to the population of the areas, dolmens were built disproportionately. The answer may not only lie in the energy reason, but also in the knowledge of other properties of static electricity. 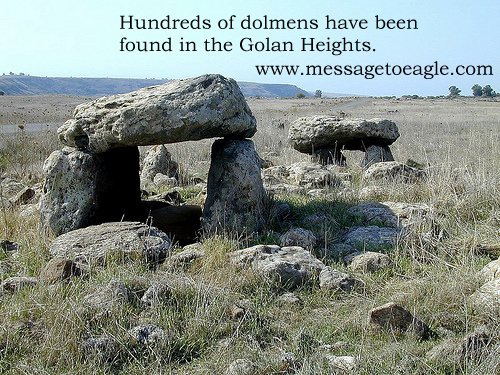 Russian dolmens are characterized by a progressive feature - the leading rock has a regular circular inlet opening in itself, thereby further increasing the wall energy concentration. This indicates a growing interest in research in this area. In this sense, we return to each megalithic structure that needs to be thoroughly evaluated.

Let me give a few examples:

Throughout the territory of the Italian island of Sardinia, historians have counted over seven thousand Nuraghes, which are wondrous ancient "beacons." These buildings are in fact built from large; often several-ton weighing stones laid on each other without mortar, and are hollow in its centre. The essence of all megalithic structures is the racking up material over the energy space to form a common charge. The areas around the Nuraghes contained enough stones, so they were used as a building material. The vertically tapered construction ensures stability, especially when not using mortar - the interior space could be used as dolmens, to supplement the body's energy. Nuraghes worked as menhirs and other megalithic structures, but their excessive concentration has not been explained. Similar conical structures - called Brooches - were built in Scotland.

On the American continent people built earthed mounds that have the same function as Nuraghes or dolmens. These were less labour intensive and, in some cases, there was a lack of rocks.

In the Czech Republic I noticed an unobtrusive but highly effective battery of static electricity by the river Vltava. It is a two meters high and several meters long stone wall, positioned perpendicular to the direction of water flow. Due to the changes in river flows, the zones of the water flow are in constant contact with the stone wall, which supplies energy.

Similar stone walls, reminiscent of landfill stones are found in other places. The construction of energy structures never ceased. It was located mainly in church buildings, through antiquity and the Middle Ages, and remains to our time. It is unbelievable that a huge natural energy remained hidden to the attention of science and influenced us without our knowledge.

The Golan Heights is an area of about 1250 square kilometres, which is an important water source supplying water to four states. Excessive presence of static electricity can be deduced from a number of megalithic structures.

The local circular structure with a diameter of 159 m consists of five concentric circles that are laid out in bulk stones with a total weight of about 37,000 tons. The largest stones used weigh around 20 tons. There are 8,500 other dolmens and menhirs located In the vicinity of this building, the largest of which weighs 50 tonnes and they are up to 7 meters high.

Sardinia has over seven thousand Nuraghes, the Caucasian mountains about 3,000 dolmens, and there are about 100,000 mounds as well as menhirs and dolmens on the American continent. From this we can deduce that there were millions of megalithic structures built across the globe. These are interesting data, but in order to come to any conclusion, it is necessary to obtain more detailed information.

It is unthinkable to deal with millions of megaliths, it could be enough to thoroughly examine a few selected sites, especially those where there were transports of millions of multi-ton rocks such as in the Caucasus, Lebanon, and the Golan Heights. 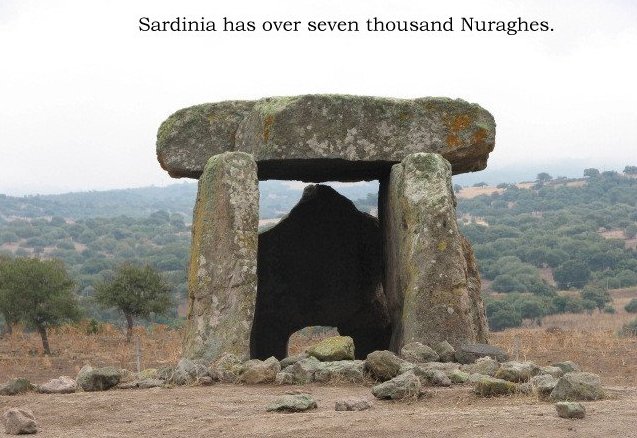 By the term investigate I mean: photographic documentation, coordinates, altitude, type of local surrounding rock, the type of rock that the megaliths consist of, etc.. If the emegalith is functional, then obtain the size of the aura and the spaces between the three zones to try to identify the source energy of the megalith, and possibly other information required by the specialists. Particular attention should be paid to "balanced rocks", which may have been a replacement source of a communication structure.

It is a very time consuming task, but I think the magic word antigravity could work in the same way as the word gold rush. The prospect of high profits from fuel savings due to reduced weight of thousands of aircraft, ships and millions of cars may cause an increased research interest in some business groups.

This will be further encouraged that it is nothing new, it is only necessary to reveal something that has already been found in the distant past.