Conny Waters – AncientPages.com - If you enjoy art you may have stumbled upon older Japanese paintings where people are portrayed as cats. This may look funny and kind of cute, but it’s not always a subject of pure humoristic entertainment but rather restrictions and censorship.

If you go to Japan, you can find many places where images of cats suddenly appear. In modern Japan, there are cat cafes, cat shrines, cat temples, a cat train station master, and a cat island. The cat day is celebrated on February 22. Japan does cat worship better than any country on Earth. 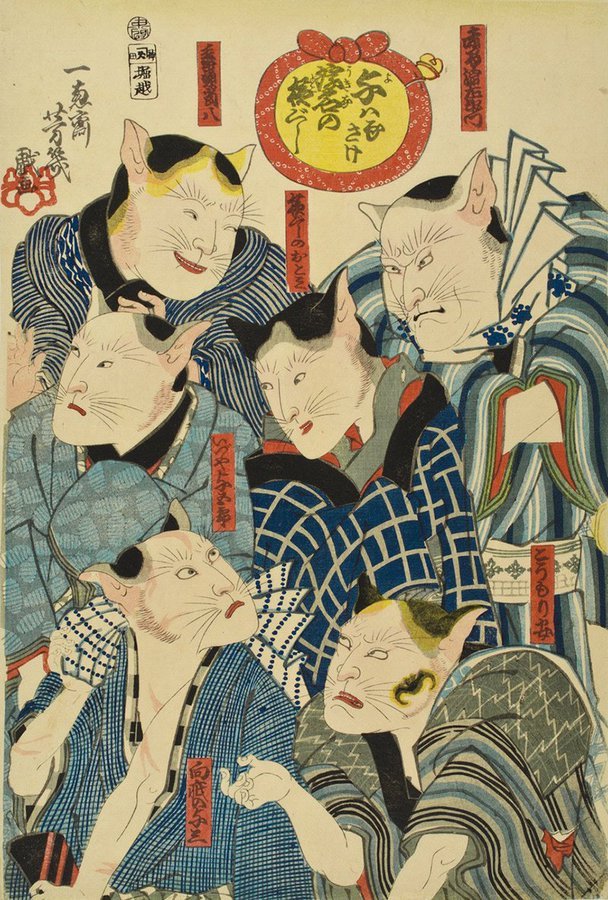 Painting from 1860 from The Story of Otomi and Yosaburo' by Utagawa Yoshiiku. Credit: Public Domain

Cats are said to have arrived in Japan about 1,000 years ago.  Traveling onboard ships carrying Buddhist scriptures that were sailing from China to Japan, cats entered not only the country but the heart of Japanese people.

Cats were considered guardians of Buddhist scriptures, but they were also troublemakers and their mischievous deeds like stealing food or destroying things have been a subject of many Japanese folktales. Cat’s mysterious nature led to the creation of the Bakeneko, or “cat monster” that is a legendary yokai in Japanese mythology.

Stories of the supernatural legends of Bakeneko can be found in many Japanese folktales. The most famous account is the tale of the Nabeshima Bakeneko Disturbance in Saga Prefecture.

Many Japanese artists loved cats which is one of the reasons why cats can be found on paintings, prints, and sculptures.

The great Japanese ukiyo-e master Utagawa Kuniyoshi (1798 – 1861) is famous for his love of cats and these lovely felines kept him company in his studio.

Ukiyo-e (literally meaning “Pictures of the Floating World,") is a Japanese art that emerged during the Edo period (1603 – 1868) when Japan focused on culture instead of wars.

Ukiyo-e artists produced paintings and woodblock prints depicting the everyday life and interests of the common people. The word ukiyo refers to the world of common people and e means “picture”. 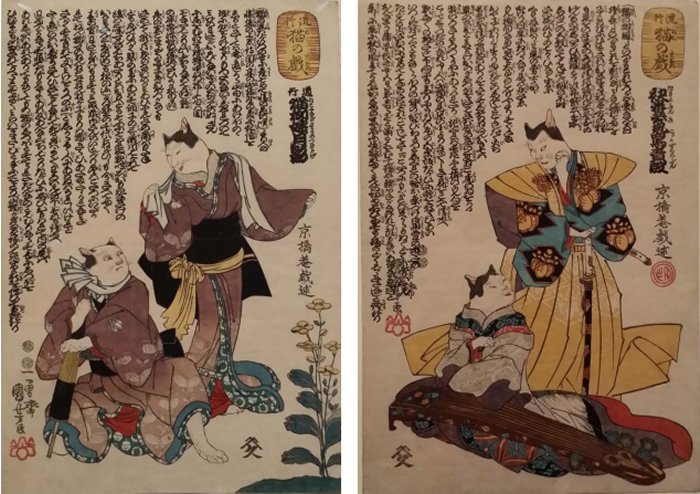 Thanks to advances if woodblock printing techniques, Ukiyo-e art became an appreciated form of art of Japan’s popular culture. Many Ukiyo-e prints and paintings depicted Kabuki actors, sumo wrestlers, and beautiful women, but scenes from history and folk tales including travel scenes and landscapes, and erotica very also popular.

In the mid-19th century, Kabuki actors were suddenly replaced with cats. The government banned pictures of actors and courtesans, considering them detrimental to public morals.

Artists had to find a way to work around the limitations of censorship, and they successfully produced great paintings and prints giving the actors the look of cats, but enough of their own features were left in place. This gave Kabuki fans a chance to recognize the actors even though he had the appearance of a cat.