A. Sutherland  - AncientPages.com - In Norse mythology, Ull (also known as Ullr, Uller), is a patron of winter, a handsome skier, skater, hunter and excellent archer, whose extraordinary skills were often prized in skaldic poetry. 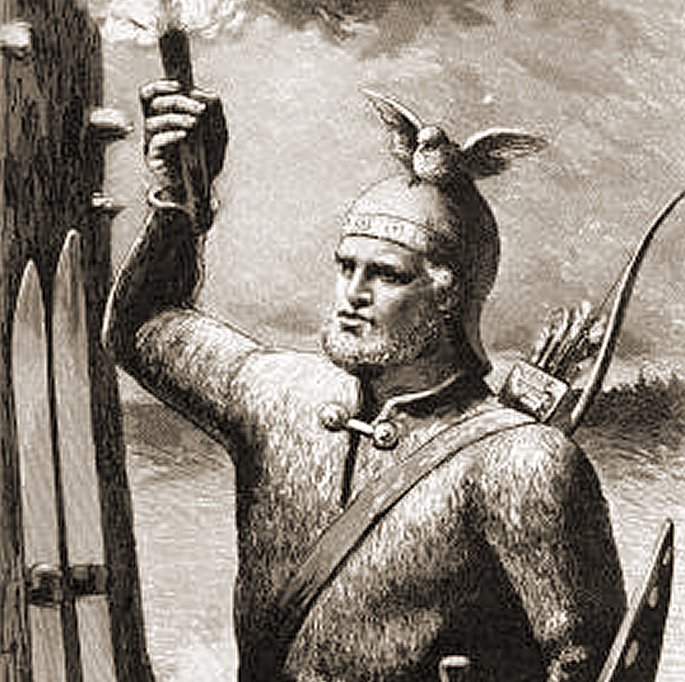 An illustration from Fredrik Sander's 1893 Swedish edition of the Poetic Edda. Public Domain

He never missed the target, no matter how far and small it was. It's good to call him into a fight. As he was the fastest skier ever known, no one was able to compete with him. From him, people learned this art.

Snorre Sturluson says about him briefly in his Edda:

"Ull is named one, son of Siv and stepson of Thor," and associates him with the bow and with snow-shoes. In another place in Eddan, Snorre says that Ull can be called the Ski god, the Bow god, the Hunting god, and the Shield god.

Saxo Grammaticus (c. 1160 – c. 1220), the 12th-century Danish historian, theologian, tells us that he crossed the sea on a magic bone, which suggests skates.

Most depictions show Ull as the god of hunting, archery, and skiing, with a large quiver full of arrows, a huge bow, and often with skis. But he was also known as 'god of the shield' because if necessary, he could use it as a boat. According to tradition in the northern regions, the skis were sometimes made of bone, and they were bent upward, like the nose of a ship.

Some myths tell that the god Ull used to spell magical runes over the bone, turning it into a vessel that carried him above the earth and sea at his request in any direction.

It is known that Ull's mother was the goddess Sif, and his biological father was Orvandil, a frost giant, a star hero, and the first husband of Sif. She later married Thor, who became the stepfather of Ull. 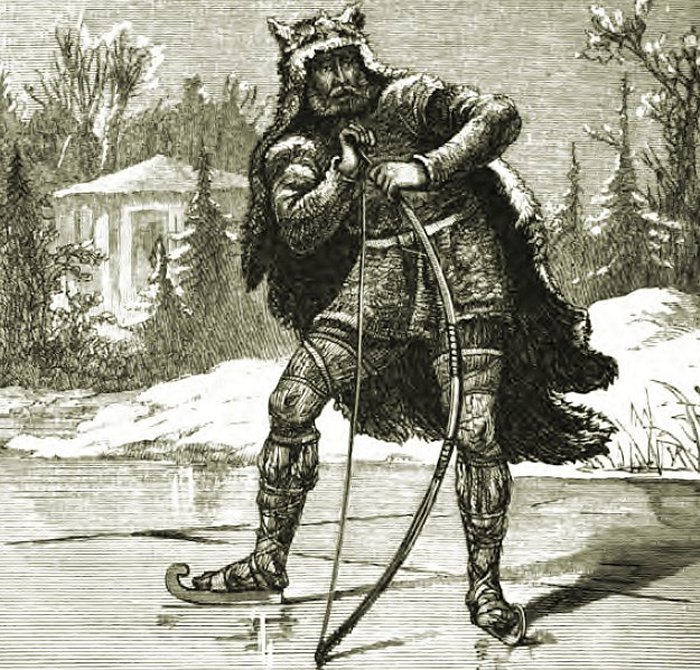 Leaning on a bow, the god Ullr stands atop a frozen lake surrounded by evergreen trees and a building (1882) by Friedrich Wilhelm Heine. Public Domain

Ull was married to the former wife of Njord, Skadi, the goddess of winter and cold. These two liked winter, snow, frozen landscapes, and skiing, and as they had much in common, they lived in perfect harmony. But in some versions, Ull and Skadi were only sports competitors and hunting companions.

Ydalir ("yew-dales") was Ull's home in Asgard, a place where yew trees (his favorite sacred trees) grew. As a highly skilled bowman, Ull knew that yew's hardwood was the best material for the manufacture of a bow.

Saxo and Snorri are the main sources of information about Ull and other sources that mention him are scattered and few. He appears in Grímnismál, (or "Song of Grimnir"), compiled by an unknown scribe in Iceland around 1270, and included in the “Poetic Edda” (the Elder Edda), which is a collection of Old Norse poems dedicated to Viking lore, heroic deeds of gods and mortals.

Gefjon: Norse Fertility Goddess Who Knew Humans’ Fates, And Plowed Away Part Of Sweden And Gave To Denmark

Geirrod: Giant That Tried To Kill God Thor But Was Killed Himself

In 'Gods and Myths of Northern Europe' H. R. Elis Davidson writes that “in Norway and Sweden, his name [Ull] occurs in place names in two forms, Ullr and Ullin. Places called after him are in many cases near those called after Frey, Freja, Njord, and Njord's wife Skadi so that it seems natural to assume that he was associated in some way with the Vanir. There is little trace of his worship in Denmark, but a third-century scabbard found in a Danish bog bears a name in runes which means' servant of UU,' and its owner may have been a worshipper of the god. Ull's name is related to the Gothic word meaning' majesty,' or' glory,' and because of this, it has been thought that he was an early Germanic sky god..."

An Icelandic bald, Skald Kormak (935 - ca.970),  stated that “Odin practiced sorcery in order to win Rind.” According to Gesta Danorum ("Deeds of the Danes") by Saxo, magic runes were employed by Odin in the winning of Rind.

In Gesta Danorum, Saxo reports that Ull led the council of the Aesir gods for about ten years after the gods decided to ban Odin from Asgard after his immoral behavior that resulted in the seduction of the Russian king's daughter Rind (Rindr), who was once worshipped as a goddess and had her sanctuary - "Rind's sanctuary."

After Balder's death, Odin consulted seers on how to get revenge for his death. He consulted seers who had predicted that he would have another son with Rind. To achieve this goal, Odin used sorcery and women's clothing (disguised himself as a medicine woman),  and three times approached Rind but without success.

Nastrond (Náströnd): Grisly Hall Of Corpses – Norse Vision Of Most Terrible Place In Niflheim, Kingdom Of The Dead

Geri And Freki: Two Wolves ‘Greedy’ And ‘Ravenous’ Were Loyal Companions Of Odin In Norse Beliefs

Finally, he took advantage of her weakness and illness and managed to rape her. The giantess Rind gave birth to Odin's son, Vali (Váli), who grew to adulthood within a day and avenged Balder's death.

According to Saxo, the Aesir gods were horrified and annoyed by his act. Disappointed that Odin had disgraced his divinity, they deposed him from the throne and put Ull in his place. There were also other indications that Odin has closed down the government for some time to come back later, and yet another version suggests that Odin was only absent for the long winter months.

Ull Was Almost As Important As Odin

At some time in history, Ull was just as important as Odin. During his ten-year-long reign as the king of Asgard, he even took the name of Odin. Swedish and Norwegian place names testify that Ull once had a prevalent cult, and probably belonged to an older group of pre-Christian Nordic deities.

The “Elder Edda" gives Ull a prominent place by mentioning him as number two after Thor and by using the phrase: "Ull and all gods."