A. Sutherland  - AncientPages.com - Bread has been known for millennia though its true history from the beginning is lost in time. It is the basic food of man in almost all cultures around the world. 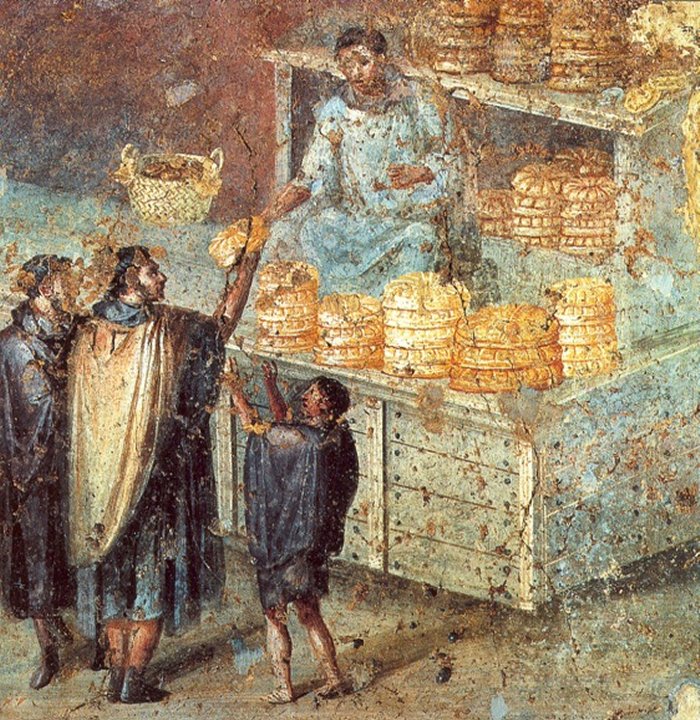 Sale of bread at a market stall. Roman fresco from the Praedia of Julia Felix in Pompeii. source

The folklore surrounding bread was passed down in the form of oral tradition, hieroglyphics found in ancient Babylonia, and in the Egyptian tombs, and ancient records about bread left by ancient Chinese writers.

Bread played an important cultic role (for example, in the Old Testament) as well as cultural and symbolic. Christian tradition has been known as a popular custom to bless each new loaf of bread with the sign of the Cross. Also, the Sacrament of Communion (flesh and blood, bread and wine) is of great importance in Christian imagery symbolizing the blood of Jesus Christ.

In Judaism and Christianity, unleavened bread (prepared without yeast) has also symbolic importance.

It All Started With Herbs, Fruits, Nuts  And Grinding of Grain

At first, people lived on fruits, herbs, and later nuts, which they included in their daily menu. The next step was grinding of grain, recorded by early historians of Assyria, India, America, and China.  The grain was softened with water (forming a paste) and sundried in thins slabs similar to pancakes (but with a hole in the center of each cake). Then these pancakes were stored for winter and seasons of drought. It was quite primitive baking that satisfied hunger, but it was long before wheat was grown.

This practice (easier to prepare in warm countries) was also popular among the Scottish and Scandinavian people, where the climate did not help make this kind of food. 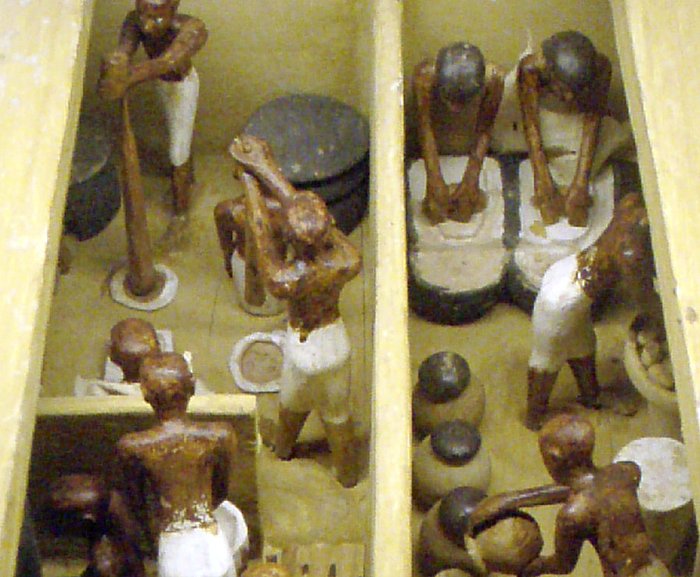 A funerary model of a bakery and brewery, dating the 11th dynasty, circa 2009-1998 B.C. Painted and gessoed wood, originally from Thebes. Source

The first crude ovens predated Babylonia by approx. 2,000 years. The first ovens consisted of holes in the ground dug to a depth of about four and one-half feet, and they were lined with baked mud. A fire was built over these holes, and the ashes were scraped out to place the dough inside it. A flat brick covered the top of the oven.

The bread was a payment in kind for the Egyptians: wages and taxes were calculated in bread loaves. Ancient Egyptians sometimes paid their officials with good bread.

The paintings on the walls of the tombs in ancient Egypt show that baking around the 25th century BC was an art. The Egyptians were the first to introduce the yeast directly into their bread. They also found that they could take a piece of dough from one batch and save it for the next day’s batch of dough, this was how the origin of sourdough started and this process is still used today.

The construction of ovens developed with time. First closed arch ovens were built in Rome, and this type of furnace was gradually improved over the centuries. 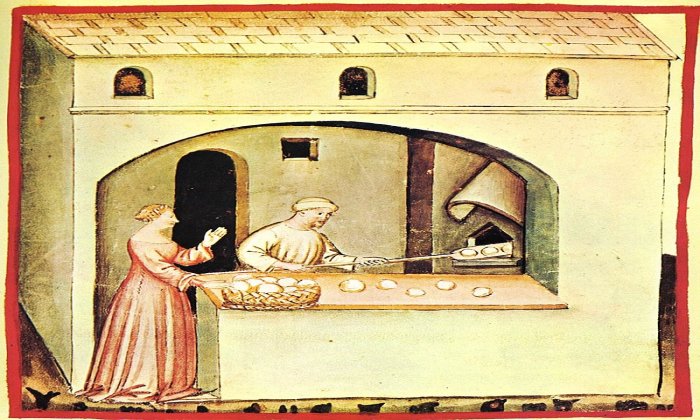 The real gourmets of bread were the ancient Greeks.  In the 3rd century BC, there had over 70 types of bread. The oldest bread that archaeologists managed to unearth comes from Crete (Greece), and its age is estimated at 6100 years.  Initially, it was baked in ashes, later, in the first bread oven that was warmed up inside and open at the front.

As early as the fifth century BC, there were over 300 bakeries owned by Greek bakers in Rome.

The Greeks passed on the artistry and the baking techniques to the Romans, who turned baking into a large-scale industry.

The ancient Romans became interested in bread at the turn of the eighth and seventh centuries BC. Bread baking ovens soon became very popular in ancient Rome and during the reign of Emperor Octavian Augustus (27 BC – 14 CE), there were about 300 ovens baking bread.

Large bakeries emerged in all Roman cities and had professional bread ovens where large quantities of bread could be baked at once.

Bread Changed Over The Centuries

The appearance and properties of bread have changed significantly over the centuries thanks to significant improvements in baking techniques and a great variety of bread ingredients. 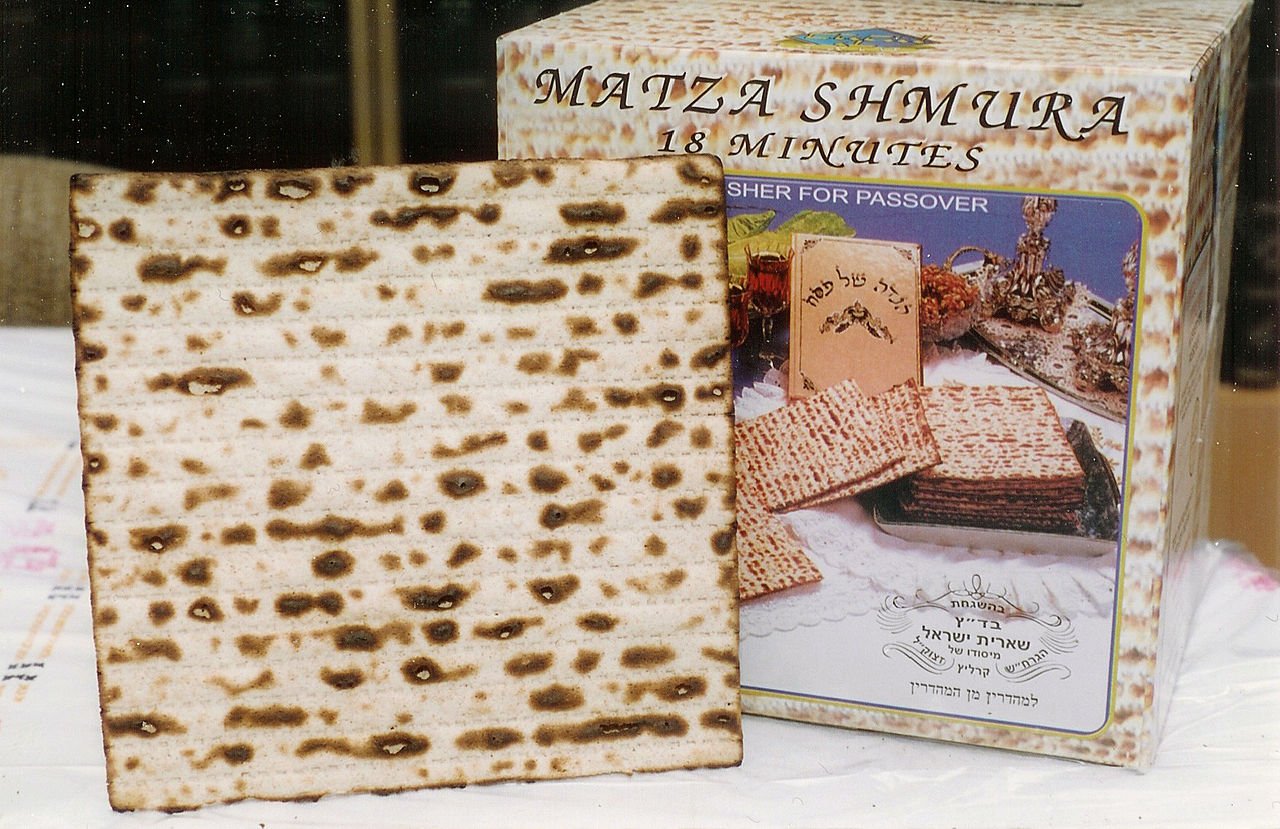 The most original form of bread was baked in ashes, on hot stones, and later also on grates and metal sheets. Baking pancakes under a clay pot (bell), covered with hot ash, gave rise to dome bakery ovens with a side hole, which in this form survived from Roman times almost to our modern times.

The first documented production of sourdough bread dates back to ca. 1500 BC. Egyptians realized that when flour and water were left out long enough to ferment, the resulting dough increased in volume and was able to be baked into bread. The Jewish people learned to make sourdough bread in Egypt and took that knowledge with them when they fled the region.

From this period on, sourdough bread became popular in Europe and the Middle East.

Bread For Pilgrims, Travelers, The Sick And Poor People

Bread in the early Middle Ages, even in pre-Christian times, played a significant role in Europe in local rituals.  In the form of a cake called ‘kolacz’, it was an important element of weddings and traditional ethnic holidays among the Slavs.

Later, medieval bakery art was developed in municipal bakeries and monasteries that had their bakeries producing bread for themselves. In addition, they were required to give bread to travelers, the sick and the poor. As they owned grain mills, they had bread for pilgrims as well.

The one-loaf-at-a-time bread slicing machine was one Otto Frederick Rohwedder of Davenport, Iowa. He was widely regarded as the inventor of industrial portioned bread. In 1912, Rohwedder patented an automatic bread slicer, but in 1917 a fire broke out at the factory where he was manufacturing his machine. It destroyed his prototype and blueprints.

It was not until 16 years later, his machine finally appeared on the market. It was bought by the Chillicothe Baking Co. and their product called Kleen Maid Sliced Bread made a great success.

Ashton J. The History of Bread From Pre-historic to Modern Times