A. Sutherland  - AncientPages.com - In Slavic mythology, Triglav (Trzyglów) was the local deity worshiped as a protector of war, riding a black divination horse. Triglav had also power over sea storms. 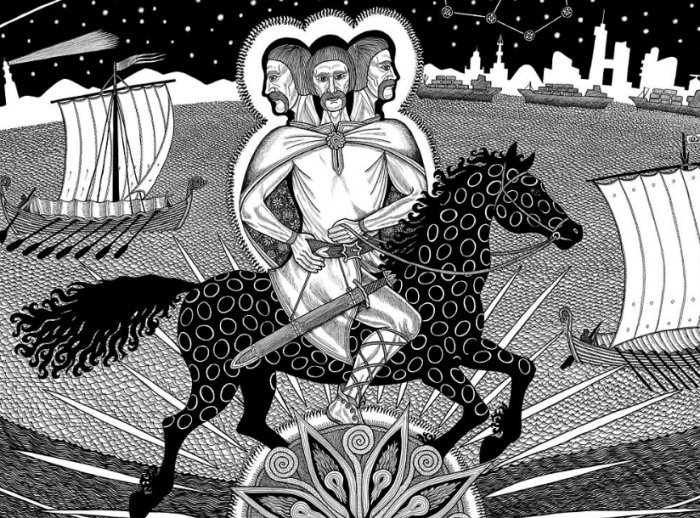 The name 'Triglav''' Triglav' is most likely his secondary name and replacement for the original one, which is long forgotten. Triglav was a three-headed deity frequently identified with Svarog and Veles, whose possible incarnations in Slavic beliefs included Trojan (divine Guardian of Righteous Paths) and Triglav.

It is worth noting that Triglav did not represent a specific deity, but symbolized the unification of the three greatest Slavic gods: Svarog-Perun-Svantevit.

His three heads were not related to a horizontal order determined by four sides of the world (north-south and east-west), as in the case of Svantevit, but a vertical order. He directed one pair of eyes at the sky; the other monitored the ground, while the third focused on the underworld.

His Gaze Could Break The Walls Of Yav, Nav And Prav

Triglav was usually depicted as a man with three goat heads, or a three-headed man sometimes with gold bandages over his eyes and mouth. The priests claimed that Triglav was extremely fond of the people, and he did not want to see their sins and speak of (or judge) them.

According to another interpretation, his strength was so intense that only his gaze could break the walls between the three worlds of Jav (Yav), Nav, and Prav, with which his believers personified him.

Jump Over Fire Ritual For Lada – Goddess Of Beauty, Love, Harmony And Order In Slavic Mythology

Capable of fortune-telling, Triglav was frequently advised on war matters. His attributes were a holy oak and a huge black horse.

"...A horse of noble stature and black color also played a part in the worship of Triglav. No mortal man was allowed to mount this steed, and it was used in divination like the horse of Svantovit. In front of the temple, whenever a warlike expedition was about to be undertaken, the priests placed nine lances about a yard apart. The head priest then led the horse, adorned with a gold and silver saddle, thrice across these lances; if he stepped over without touching any of them, it was considered a favorable omen, and the expedition was decided upon..." (Macculloch, J. A. The Mythology of All Races Vol 3) 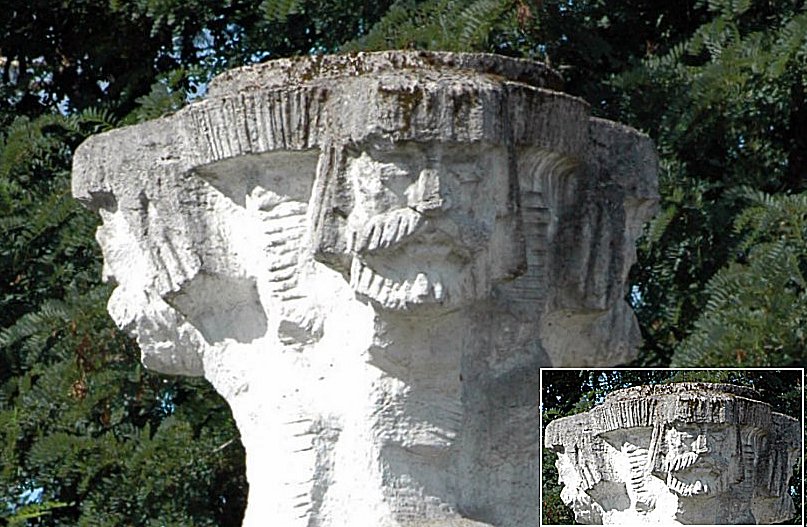 In consequence, all the worlds would mix, triggering the disappearance of the earthly world and humanity. Therefore, to preserve the world as it is, many ancient Slavic priests served Triglav and transmitted his ultimate will to the people.

Triglav - the Lord of the Three Worlds - was worshiped primarily among Western Slavs, and the traces of Triglav's cult were discovered in the region of today's Szczecin (Stettin), a city in northwestern Poland, on the island of Wolin and later, in Brenna (Brandenburg).

Several temples dedicated to Triglav existed near present-day Szczecin, Poland, where he was held in particularly high esteem by the Slavs.

The most striking confirmation of Triglav's enormous admiration among ancient people in this region was the temple of this god Triglav on the highest hill. The temple was beautifully decorated with majestic columns. Its walls were covered with black fabric, giving the temple an unusual and sacred appearance. 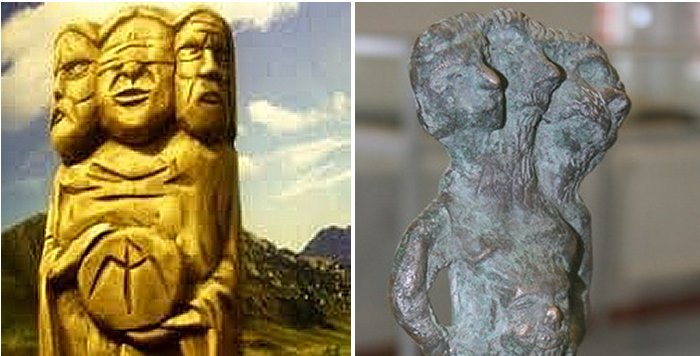 In the vicinity of the sacred temple, the worshipers built three buildings, which served as a place for important meetings and feasts. One of them had walls decorated with reliefs that portrayed people, birds, and wild animals so accurately that they seemed to breathe and live, according to Herbord, a Benedictine monk and biographer of Bishop Otto von Bamberg.

The statues of Triglav were usually huge, massive, and made of gold and silver were difficult to destroy for the conquerors who used more than two dozen oxen, according to ancient stories.

According to 'Biographies' Otto von Bamberg, a bishop who undertook two missionary journeys to the region in 1124 and 1128, the large body of the statue, which was destroyed by the bishop himself, who took the connected Triglav's three heads as a trophy.

He sent the artifacts to Rome as evidence of the conversion of the Pomeranian Slavs to Christianity.

Finally, when Christianity arrived, all temples and statues of Triglav were all destroyed, despite the people's attempts to hide them from the priests of Otto of Bamberg.