A. Sutherland  - AncientPages.com - We call her today - Lady Justice. Her modern statues frequently decorate courthouses and courtrooms in many countries around the world.

Additionally, images of justice can be found virtually anywhere. They appear on sculptures, bas-reliefs, statues, paintings, porcelain, stained glass, seals, coins, sometimes on medals, logos of certain websites, and even on clothes. 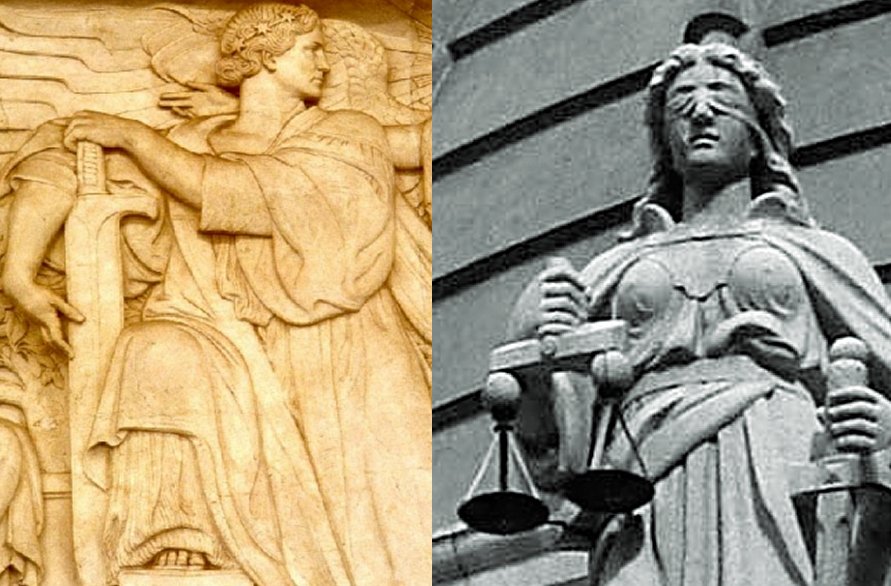 Left: A robed Justice (without blindfold) is the focus of the allegorical story of the battle of Good Versus Evil. Her unencumbered gaze is set determinedly in the direction of the forces of Evil, to the viewer’s right.(One of the Courtroom friezes sculpted by Adolph Weinman). Source; Right: Justitia blindfolded and holding balance scales and a sword. Court of Final Appeal, Hong Kong. Source

In the past, it was not easy to create an image of Justice. Many artists seemingly asked themselves simple questions: How to paint justice? What does she look like?

After all, Justice is an idea, a specific legal and philosophical concept, which means that artists could not use the model of Justice; they could only create their own impression of her.

In ancient Rome, she was called Iustitia (Justitia), and in Greece, she was equal to the goddesses: Themis ("the Lady of good counsel") and the personification of law, divine order, divine justice, natural law, the right, fairness, and custom), and Dike (the goddess of human justice and the spirit of moral order and fair judgement).

It was long believed that in the Golden Age, she lived on earth, and then, with the rise of human wickedness, she left the planet and went to the sky to dwell in the constellation of Virgo. 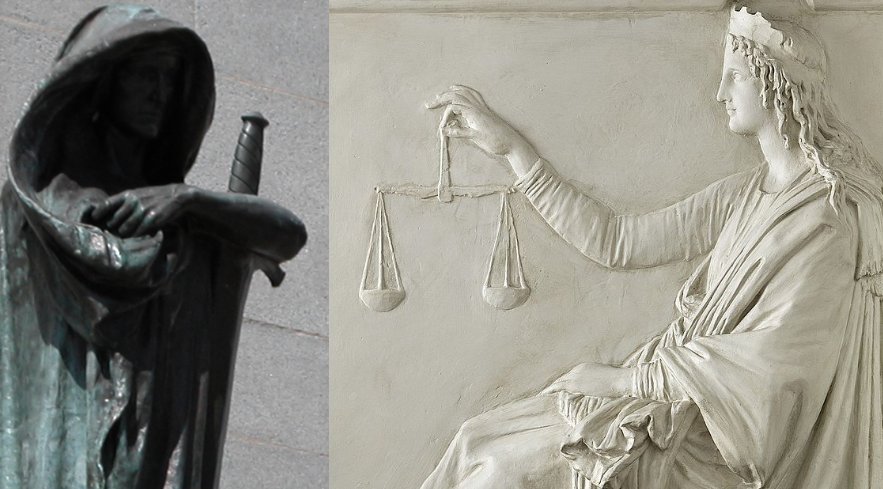 Left: Statue of Justice outside the Supreme Court of Canada in the capital city, Ottawa in the province, Ontario;  source; Right: The bas-relief of the Goddess of Justice. source

In Egypt, the idea of law, divine order, and truth were personified by the goddess Ma'at presented as a young woman holding a set of scales in one hand, in the other a symbol of eternal life - the sign of ankh.

Appearance, Attributes And Their Meaning

As depicted on the statues, Lady Justice has a long robe/dress, a sword, the scales of justice, and is usually (but not always) wearing a blindfold.

These attributes are of great importance due to their symbolism.

Abundantia: Roman Goddess Who Was Shaking Her Gifts From Cornucopia – ‘Horn Of Plenty’

Numa Pompilius – Remarkable Legendary Second King Of Ancient Rome Who Succeeded Romulus – Did He Ever Exist?

Carrying a double-edged sword in her right hand, Lady Justice wants to emphasize the power of reason and justice, and these can be used for or against an individual.

The sword in the hand of the Lady of Justice means even more. It is a symbol of authority exercised by emperors, kings, and other influential individuals.

At the same time, the sword can be used against a ruler or king, and thus his/her unlimited power can cease in a blink of an eye.

Blindfold Justice - Obliged To Be Objective

The blindfold represents objectivity with no place for prejudice or passion.

Therefore, also, the Lady of Justice must act objectively, and without favor or fear. Her decisions have to be weighed on the scales and it must be done without regard for a person's identity, power or weakness, money or rank.

However, the earliest Roman coins depicted Justitia with her eyes uncovered.

One argument for Justitia's uncovered eyes was to urge judges to consider cases with their open eyes.

One example is the statue of Lady of Justice - without a blindfold - atop the Old Bailey courthouse in London. Later, since about the end of the fifteenth century, she was commonly represented as "blind."

The Scales Will Decide About A Verdict

A set of scales has a long history. It was placed before the temple to weigh the deeds of the deceased. Nemesis, a winged goddess of justice and revenge, is portrayed with a set of scales and a sword. Also, Atropos, one of the Moirai, was occasionally depicted with a pair of scales, and in the Book of the Dead, Anubis, the "Guardian of the Scales," participates in the ceremony of the Weighing of the Heart.

He performs a measurement that determined whether the person was worthy of entering Duat (the realm of the dead).

Lady of Justice holds a set of scales in her left hand because she is responsible for the measurement of the strength of a case's support and opposition.

The scales in her hand will decide about a verdict.

The four classic cardinal virtues in Christianity are symbolized by temperance, courage, prudence, and justice.

In ancient Roma, Justice (Iustitia) was celebrated by Augustus, a Roman statesman and military leader who became the first emperor of the Roman Empire, reigning from 27 BC until his death in AD 14. A few years later, emperor Tiberius ordered to build a temple of Iustitia in Rome on 8 January 13 BC.

From now on Iustitia became a symbol of justice with which every Roman emperor associated his rule.

Tremblay Luc B. The Rule of Law, Justice, and Interpretation