Ellen Lloyd - AncientPages.com - Many have never heard of Viking Botvid, but his story is remarkable, and his legacy is still alive in Sweden. Botvid was born in those days when Norse God Odin was worshipped, but this didn’t prevent him from becoming a Christian follower. Later, he was declared a saint and a church was built in his honor.

When Botvid was a young man there were no indications Christianity would play an essential role in life, but certain events changed his faith.

Botvid was born Botkyrka municipality, located just outside of the Swedish capital Stockholm. If you visit the place today, you can see there is a small church there named after him. Saint Botvid, was a Christian missionary during the 12th century and he is depicted on the seal and coat of arms of Botkyrka Municipality, where he carries an ax and a fish.

The legendary Viking hero is buried at the Church’s cemetery and this ground is considered sacred.

Botvid was son to a Chieftain, but he had to leave his family home when his father died. Botvid’s older brother inherited the farm and Botvid had to find other ways to support himself. Not quite knowing what to do, Botvid decided to travel to England. His initial plan was to become a trader.

While being in England he became ill and he stayed at a guesthouse run by the local church. A priest took care of Botvid and he became interested in Christianity. Instead of selling goods, he returned to Sweden and started preaching and spreading Christianity. 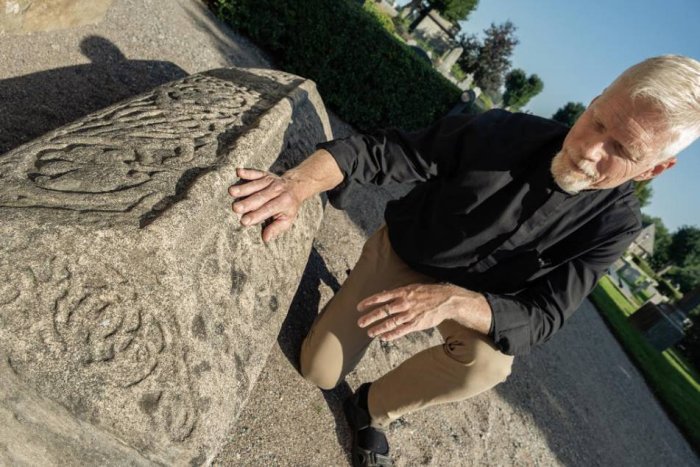 A reconstruction of events based on ancient sources reveals Botvid met a horrible death. He died on a small island just outside of Stockholm. He was killed with an ax by a slave whom he had granted freedom. Botvid told the slave he was free to return to his home country and it’s a little uncertain what happened next. Historians think the slave, despite having a letter of liberty doubted he was free to go and became frightened. He took an ax, cut off Botvid’s head and escaped in a boat.

It took some time before Botvid’s family understood what had happened. When they found Botvid's body, he was taken back to the place where he grew up and his brother Björn ordered to build a church in honor of his brother. The Botvid Church still stands there, and so does his tombstone.

Botvid was one of the most important saints during the Middle Ages. Bridget of Sweden (1303 –1373) said she experienced a vision of Botvid who appeared in front of her and told her to embrace God.