A. Sutherland  - AncientPages.com - Multiple burials of possible women warriors have been unearthed in different sites associated with the Scythians, Sauromatians (a tribe nation ruled by women), and Sarmatians.

These ancient cultures that date back from the late seventh through the second centuries BC had many female warriors. 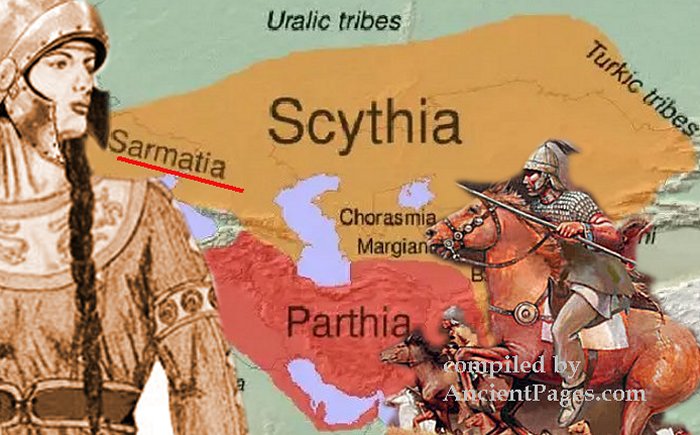 Among many women who lived in this part of the world, and roamed wild Scythian steppes, was Amage, a Sarmatian warrior queen who lived at the end of the 2nd century BC.

A large number of excavated Sarmatian military burials include the remains of armed Sarmatian women, The remains reveal clear signs of severe battle injuries, including stabs to their skulls and blows, which are similar to those observed on the remains of male warriors.

These findings, along with spears, axes, and lances, and even double-edged short-swords (akinakes), found in the graves, strongly suggest that they all died in battle. The Sarmatian women were brave and skilled as were their husbands, brothers, and other relatives.

Among many women who lived in this part of the world, and roamed wild Scythian steppes, was Amage, a Sarmatian warrior queen who lived at the end of the 2nd century BC. Very little is known about this Sarmatian queen and her rule. However, Sarmatian women became famous for having a prominent role in wars.

According to Hippocrates (c. 460 – c. 370 BC), Sarmatian women participated in warfare, and Herodotus (c. 484 – c. 425 BC), a Greek historian described them as fighting in the same clothing as men. Some believe that the deeds of Amage and similar Sarmatian female warriors inspired those who created the Greek myths of the Amazons. Amage was the wife and co-ruler of the Sarmatian king Medosacus.

Her husband was said to be a notorious drunkard, and a reveler who abused his power as a monarch for personal luxury, according to one source, while another version points to the king’s mental incompetence of some sort.

Amage Made An Important Decision In Difficult Times

From now on, the brave queen-warrior acted as regent; she took over the government into her own hands.

“She judged causes, stationed garrisons, repulsed the invasions of enemies, and directed everything with such a great ability that her fame extended through all Scythia…”

She Was A Successful Ruler

Amage impressed with the extraordinary military achievements - in the era of big but sluggish armies which depended more on size than strategy and tactics.

Instead, she organized a rally reminiscent of the actions of modern commandos. Her fame as a successful leader reached neighboring tribes and even far beyond the borders of her territories.

The inhabitants of the Chersonesus (once, an ancient Greek colony founded about 2,500 years ago in the southwestern part of the Crimean Peninsula), also learned about her achievements. These people had been systematically harassed by a king of the neighboring Scythians. At last, they requested an alliance with her.

Polyaenus narrates that “in consequence of a treaty formed between the two nations, she wrote to the Scythian prince, requesting him not to repeat his ravages in the Chersonesus. When he treated her prohibition with disrespect, she marched against him with a hundred and twenty men of tried courage, and extraordinary strength, each of them provided with three horses…”

In one night and day, she covered about two hundred kilometers (versions vary), and reach the palace of the enemy.

In an unexpected attack, her troops captured the palace of the prince, slew the guards, his friends, his family, and ultimately killed the ruler himself.

Then “she put the inhabitants of Chersonesus back in free possession of their country, and gave his hereditary dominions to the son of the Scythian prince…”

She allowed his son to live on the condition that he obeys her. She also warned him to be very careful and take “a warning from his father's death, and not to invade the territories of the neighboring Greeks and barbarians.”