David Tee - AncientPages.com - The Kingdom of Judah was born when the people of Israel demanded to have a king reign over them, as the surrounding nations had.

Four kings ruled over Judah - Saul, David, Solomon, and Rehoboam. However, it was David and Solomon that took Judah to its great heights. 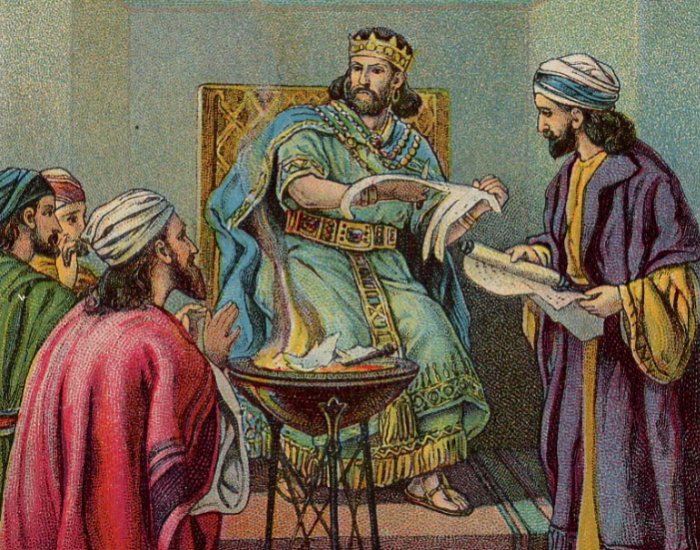 Jehoiakim burns Jeremiah's scroll; as in the Book of Jeremiah 36:21-32  (illustration from a Bible card published in 1904 by the Providence Lithograph Company) source

The Kingdom then split under Rehoboam and Judah was left to make its way amongst the more significant surrounding nations and empires. Rehoboam was left with Judah, Simeon and Benjamin and the lands of Edom and Shephelah to rule over.

This was the Kingdom that took on Assyria, Egypt, and Babylon in the coming years.

The Rise Of Babylon

The Assyrian Empire started to show its weakness, and when Ashurbanipal came to the throne, he did not initiate much military action. He spent more of his time governing than conquering. In the following years after his reign, Assyria was ruled by weak Kings.

This weakness opened the door for Nabopolassar to seize power in Babylon, a conquered state at the time, and break the hold Assyria had. Nabopolassar’s reign was filled with wars and battles against the Assyrians.

It was his son Nebuchadnezzar II who finally destroyed both the Egyptian power and the Assyrian Empire. Judah stood in its path for final and ultimate control of the region.

Jehoiakim One Of The Last Kings Of Judah

Jehoiakim, one of the last kings of Judah before the Babylonian captivity, was a son of King Josiah (Jeremiah 26:1). He was probably like a lot of politicians today. They see which way the wind is blowing and then make their alliances.  When the wind changes, they change. Jehoiakim did the same. 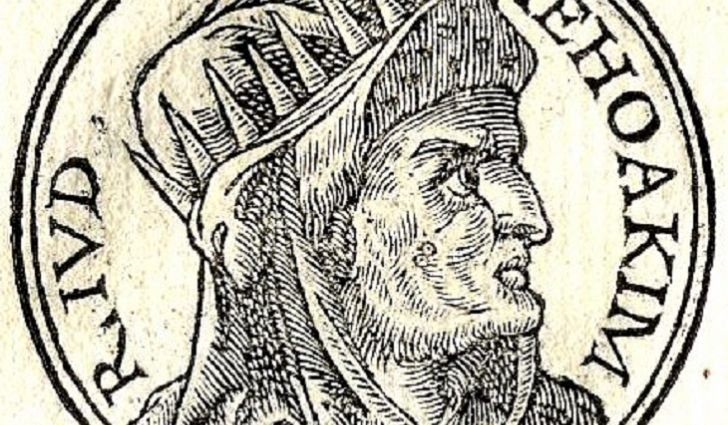 According to the Babylonian Chronicles, "the seventh year (of Nebuchadnezzar – 598 BC.) in the month Chislev (Nov/Dec) the king of Babylon assembled his army, and after he had invaded the land of Hatti (Syria/Palestine) he laid siege to the city of Judah.... image source

At first, when Egypt was very powerful, Jehoiakim sided with that country. But once Nebuchadnezzar defeated the Egyptians, Jehoiakim changed sides and became an ally of Babylon. For a short time anyway. Jehoiakim must have desired to be an independent ruler of a vast empire like his forefathers David and Solomon. For it wasn’t long before he started to create plans to rebel against the Babylonians.

Biblical Lydia ‘Woman Of Purple’ Who Run Her Own Business

Asenath And The Golden Tablet That Changed Her Destiny

Jehoiakim may have been assassinated about the time that the Babylonians returned in 598 BC to finally put an end to the rebellious rulers of Judah. Jehoiachin, his son, did not last long on the throne and was taken away by Nebuchadnezzar in the first deportation of the people of Judah.

Zedekiah Brings The End Of Judah

Part of Zedekiah’s problem as ruler was that the people of Judah did not recognize him as a legitimate king. They felt that Jehoiachin was the rightful ruler even though he spent the rest of his life in Babylonian captivity.

In 595 BC some prophets using the name of God promised the exiled Hebrews that they would have a quick return to their homeland. These words caused those in exile to rebel against their Babylonian conquerors. They didn’t have a chance. 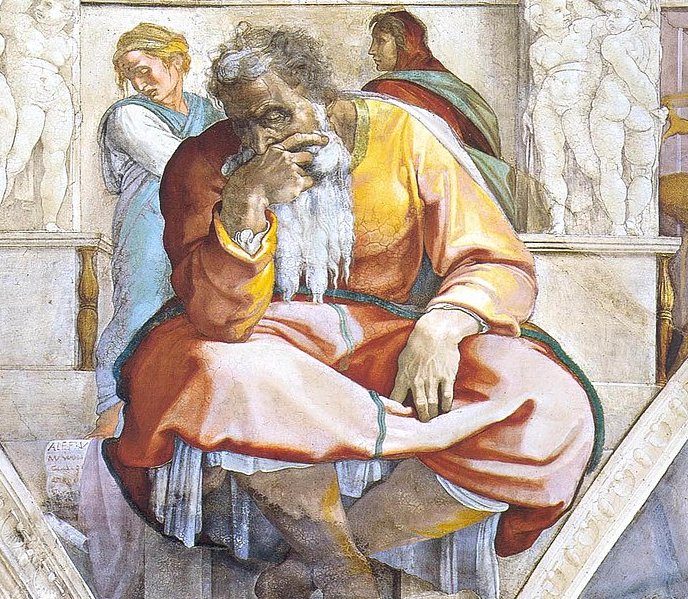 At the time, Jeremiah was the only voice speaking against rebellion. Jeremiah, as depicted by Michelangelo from the Sistine Chapel ceiling. Image credit: Vatican Museums via wikipedia

But that rebellion planted seeds in the minds of many who were left behind in Jerusalem and Judah. At the time, Jeremiah was the only voice speaking against rebellion. He also spoke against those prophets who were encouraging the people to revolt.

For a few years, the people listened to Jeremiah, but he could not contain their desire for independence nor quell their resentment that came from being ruled by foreign nations.  Lacking proper resources, military, and support from surrounding countries, Judah rebelled anyways.

Most of Judah fell to the invading Babylonian army except for Jerusalem, Lachish, and Azekah; the latter two subsequently fell, leaving Jerusalem under siege. The Egyptians did offer some help and sent an army to attack the Babylonians, but the latter was far too powerful for them, and the Egyptians were defeated.

Judah And Babylon Were Never Friends

Even though one or two kings of Judah pledged allegiance to Babylon, the two countries were never friends. Babylon was too much like those empires they had defeated to gain the world stage.

They desired power, control, and the resources that come from conquering neighboring nations. Any friendship on the part of the Babylonians only served that country’s personal agenda.

Historians may not agree, but Babylon was used by God to discipline his people for their disobedience.