A. Sutherland - AncientPages.com - A wealthy and brave shipowner, Laskarina "Bouboulina" Pinotsis (1771–1825) was a fleet commander who participated in the War of Greek Independence against the Ottoman Empire. 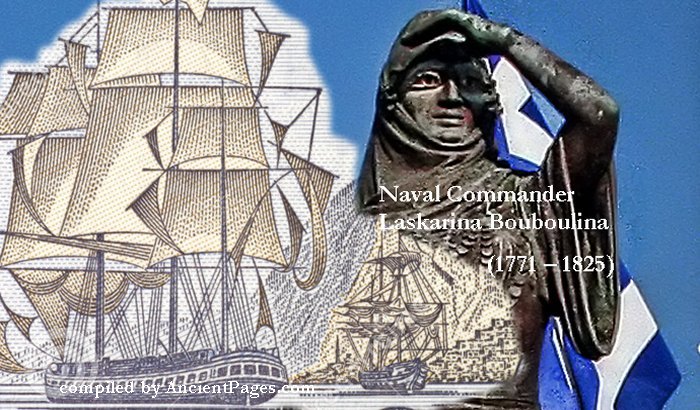 She was born in prison in Constantinople (modern Istanbul), when her mother visited a dying husband there, held for participating in a failed rebellion 1769-1770 in the Peloponnese.

Stavrianos died soon after, and her mother Skevo took her child home to Hydra. Four years later, they moved to the island of Spetses, and Bouboulina’s mother married a sea captain. The young girl grew up with hatred against the Ottomans, and interest in ships and the sea. She was also encouraged by her stepfather to learn as much as possible about ships and the family business.

During her lifetime, she had two husbands, who were sea captains and both died during encounters with the Algerian pirates who often attacked the coasts of Greece.

Left with a large inheritance and nine children, Laskarina could live a comfortable life, but she wanted to do much more. She took over management of both of her husbands’ shipping businesses, and after she successfully managed to save her money from confiscating, ordered the construction of a fleet of warships.

Bouboulina was the only female member among them. Strangely, her name does not appear among the 1,093 names on the surviving membership lists of Filiki Etairia society.

Whether she was an official member of the organization or an unofficial one-woman ladies’ auxiliary, she devoted her fleet and her fortune to the independence movement…” 1 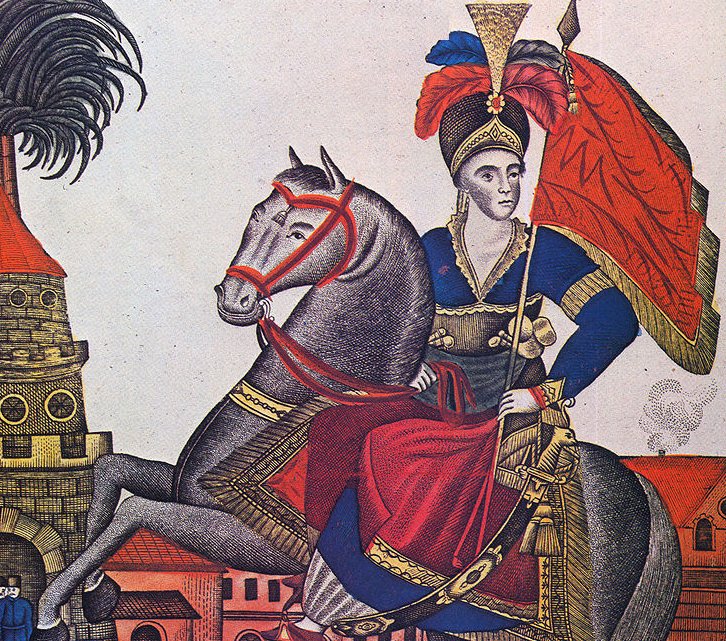 Russian engraving of Laskarina Bouboulina, the heroine of the Greek War of Independence. Source

In 1820, the construction of Agamemnon, a 33-meter-long ship armed with 18 heavy cannons, was completed despite many obstacles from the Turkish authorities. In the meantime, Bouboulina and her people managed to accumulate significant quantities of ammunition and weapons, and the movement began to support the rebellion against the Ottoman Empire.

The date of the War of Greek Independence began on March 25, 1821. Bouboulina was ready; she was a fifty-year-old woman and commander of four ships in addition to the ‘Agamemnon,’ and her small private army of ‘brave lads’ as she called them. They called her 'Kapetanisa' (Lady Captain).

Soon after the war broke out; on her flagship, the Agamemnon, the largest and the most impressive in the Greek fleet at the time, Bobboulina sailed to confront was against the Ottomans.

She blocked the port at Nafplion, a strategic Ottoman stronghold, with massive fortifications and three hundred cannons. At the time, Nafplion was considered to be impregnable. Bouboulina showed everyone wrong. 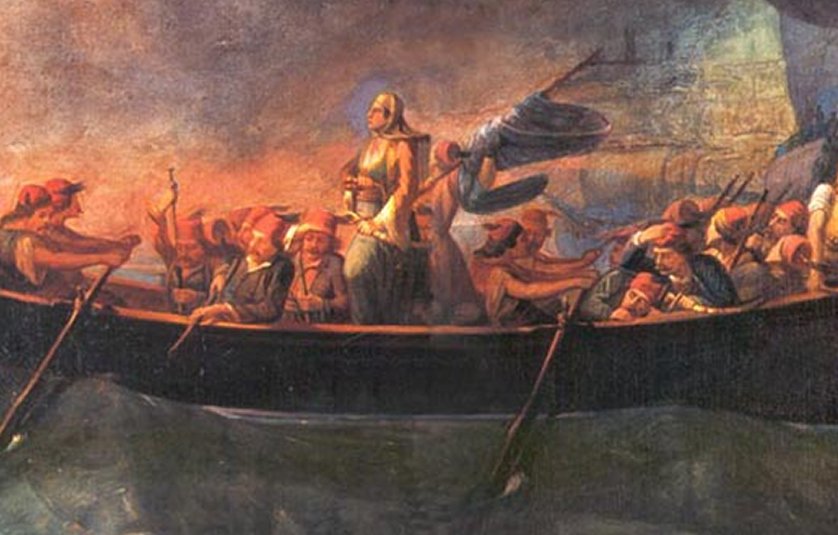 ‘On December 4, 1821, as I remember, onboard her vessel, she alone gave orders for the boats to attack the fort. They immediately sail forward, but a rain of bullets and cannon fire from the seaside fortifications make her brave lads fall back for a moment. Like an angry Amazon, watching the battle over the side of her boat, she then shouts—‘Are you women then and not men?’ Forward! Her officers obey, regroup and attack—they fight but die in vain since the fort was impregnable by sea. For this reason, she lands with her forces and stays until the fall of the fort on 30th November 1822, leading her men in battle, spending her fortune...” 1

After Nafplion, the brave Bouboulina participated in several other military confrontations against the Ottomans, of which the most critical incident took place in September 1821, after the Turkish position at Tripolis fell to besieging Greek forces. The city fell after three days of massacre and looting, which resulted in thirty thousand dead.

She did not die like a brave soldier in one of the ordinary battles for Greek freedom. At the end of 1824, still, during the war with the Ottomans, civil war broke between conflicting factions of rebels over leadership of the new Greek state.

Not only the Ottomans were Bouboulina’s enemy; she had one private enemy, and it was her fiery temper that led to her death.

In 1825 as the result of a family feud on the island of Spetses, someone shot at Bouboulina. She was hit in the forehead and died instantly. The killer of this tragic incident was never identified. She was impoverished at her death; her fortune was already lost in her pursuit of Greek independence; she lost her sons and her fleet.

She died on May 22, 1825, five years before the formation of an independent Greek state recognized by the European powers. Greece gave Bouboulina the honorary title of admiral after her death, and the Greek people remember her.