A. Sutherland - AncientPages.com - Many ancient cultures had their gods and goddesses related to the moon. Egyptian lunar deity Khonsu (the 'wanderer' or “he who comes and goes”), often wore a headdress consisting of a crescent moon, topped by a full moon, and took over many of Thoth's attributes but also assisted him to reckon time. 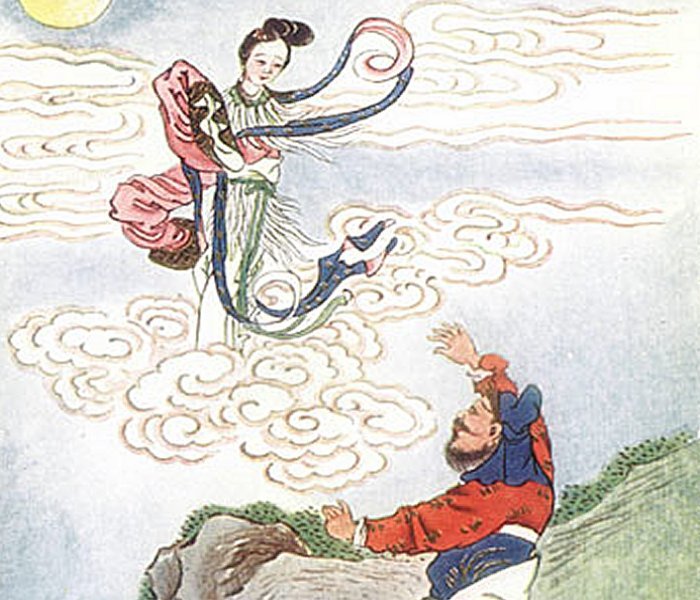 Chang'e ascending to the moon (illustration by E.T.C. Werner (Myths and Legends of China) 1922.

In Greek beliefs, Selene is the personification of the moon. According to the Greeks, she roamed the night sky in a shining, silver chariot drawn by white horses. She was depicted with wings, a torch in the hand and a crescent on the head.

The Chinese had several lunar deities and among them was Chang'e, an immortal that lived on the moon.

The Chinese goddess of Moon - Chang'e (or Ch’ang O) which means ‘the Lunar Toad’ is the subject of many Chinese myths that date back to the Tang Dynasty (AD. 618 – 906).

She was the wife of the Yi (‘Excellent Archer’), the mythical hero who was capable of shooting down nine of the them suns with his arrow. One day, for his impressive achievements, Yi received the herb of immortality from the goddess Xiwangmu, the highest goddess, patron of fairies and wizards.

However, during her husband's absence, Chang'e stole and consumed the immortality and life-restoring herb. As a result, her body became very light and she floated upward to the moon. She is therefore regarded as the mother of the moon or possibly its goddess. In Chinese folklore, the goddess Chang´e is often portrayed in the company of a rabbit, who lives on the moon, where he makes the elixir of life for her.

There are several mythological accounts of this story because each Chinese province has its own version.

One, for example, says that when the archer Yi went out hunting, his pupil, Feng Meng approached his house and forced Chang'e to give him the elixir of immortality. During the quarrel with Feng Meng, Chang'e unintentionally drank the potion and flew to the moon. 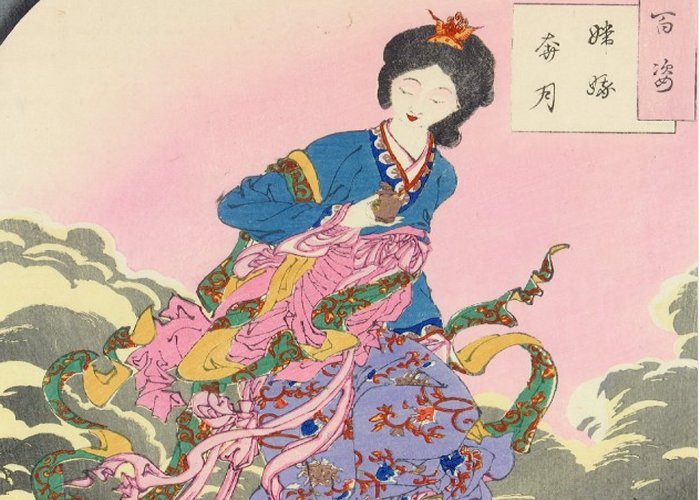 Chinese  Lunar Goddess – Chang´e, ascending to the Moon. Image credit: The Trustees of the British Museum

Another version has it that Chang´e was punished by the Queen Mother of the West, Xiwangmu, and changed into the Three-Legged Frog (Chanchu) and banished to the moon.

One legend says that Chang'e was a beautiful girl who worked in the Emperor Jade palace in Heaven. Once, Chang'e accidentally damaged a precious porcelain jar. Irritated, the Jade Emperor exiled her to live on earth, where she became a member of a rich family. When she was 18 years old, a young, intelligent Houyi (Yi) from the neighboring village saw her and they quickly became friends.

Strange Phenomenon In The Sky

A few days later, a strange phenomenon occurred in the sky. Instead of one Sun appeared as many as ten of them and their heat began to devastate the earth.

Yi decided to save the planet from the apocalypse and shot down nine of the ten suns. He succeeded and his deeds made him a famous folk hero, later a king and finally a husband of the beautiful Chang'e.

Unfortunately, the new king changed much over time. Greedy and selfish, he wanted to find a way to extend his life and eternal glory.  He simply sought immortality and eventually, he managed to bring the elixir of immortality to his palace, but he had no chance to taste it because Chang´e deliberately (or by mistake as some claim) swallowed it.

It made the king so furious that he wanted to kill his wife. Trying to run away from him, Chang'e, jumped out of window. Instead of falling down, she ascended to the moon.