A. Sutherland - AncientPages.com - Aethelflaed, (870 - 918 AD) is among the brave female warriors of old times who are usually left outside the official historical records. This brave woman led the counter-offensive against the Danish Vikings. 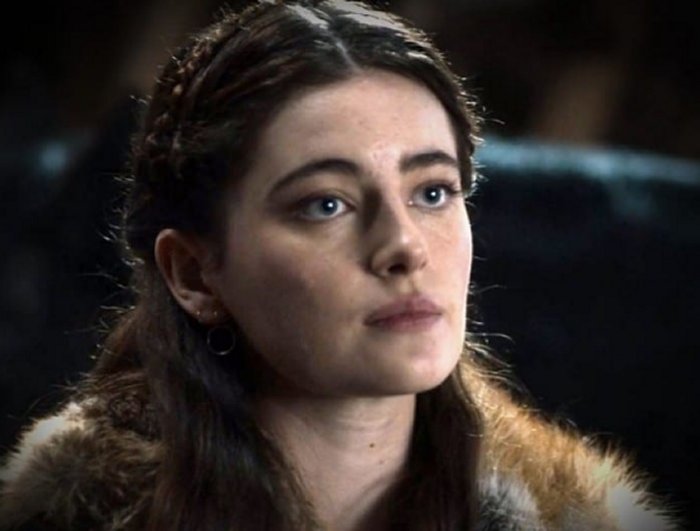 Had Aethelflaed not been the daughter of the King of Wessex, Alfred the Great (r. 871–899), we might not have any knowledge of this great military commander in medieval England.

She accompanied her husband into battles, and after his death in 912, she succeeded him as the ruler of Mercia, one of the most powerful kingdoms of Anglo-Saxon England.

Her most outstanding contribution is probably reclaiming territory from the Danish Vikings, who had controlled a large part of England for forty years.

She was widely known as the Lady of the Mercians, who led the counter-offensive against the Danish Vikings.

The eldest child of Alfred the Great (r. 871–899) and his wife, Ealhswith, Aethelflaed (c. 870–918), was of the royal house of Mercia. The family lived under the constant threat of Viking invasions as the Danish Vikings had already conquered large territories in Eastern England. 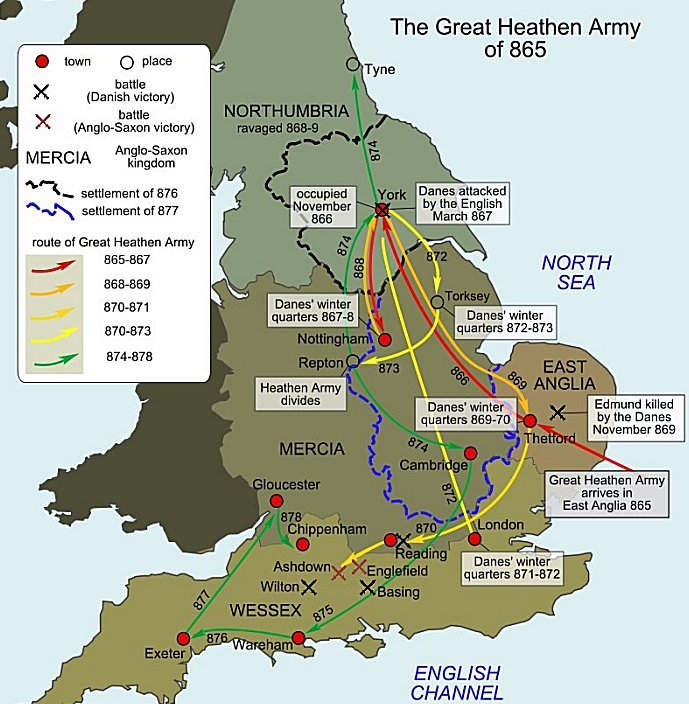 The 9th century and early 10th century was a period of intense warfare involving Viking armies all over the British Isles.

Aethelflaed never knew a time when the attacking Vikings were not a threat. Her father, King Alfred, managed to defend the kingdom of Wessex against the Vikings and even assigned a partition treaty with the Danes, controlled eastern and northern England but returned Kent and West Mercia to Anglo-Saxon control. Over time, permanent Danish settlements were established, creating the " Danelaw " area by the end of the ninth century.

Marriage Was Necessary To Strengthen The Alliance

In this unstable political situation, Alfred decided to strengthen his alliances and arranged for his daughter to marry Aethelred, Lord of Mercia. He hated the Danes and was the king's most important ally.

The union of Wessex and Mercia through the pair's marriage was an important step toward ultimately unifying the kingdoms. The couple had excellent cooperation and accompanied each other into battle until he died in 912.

Aethelflaed shared military responsibilities with her husband and succeeded him as military commander after his death. 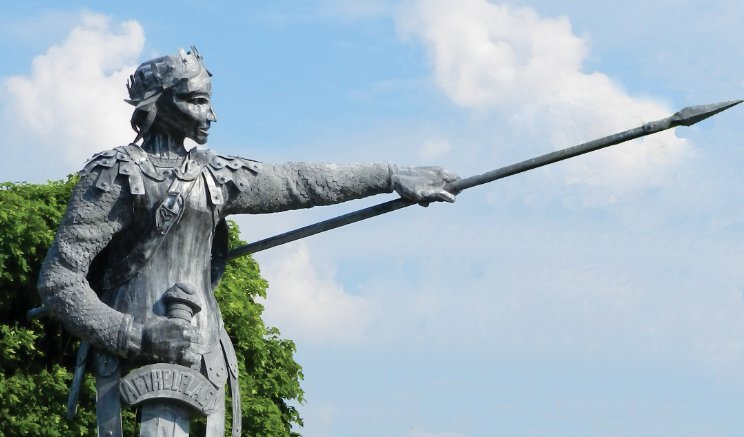 The new Aethelflaed statue outside Tamworth Railway Station erected to commemorate 1,100 years since her death in Tamworth. Her spear points visitors towards the town center and Castle. Source

Roger of Wendover, a monk based at St Alban's Abbey, Buckinghamshire, one of the most notable thirteenth-century chroniclers, said of her marriage that Aethelflaed was 'united to Aethelred, earl of the Mercians.' Otherwise, not much is known about the young Lady of Mercia and her life until the beginning of the tenth century, when her husband became seriously ill.

Already during his illness (about 902 AD), she was engaged in the country's and Mercia's problems with the Danish Vikings. She was involved in building fortresses that could protect Mercia against sporadic Danish raids and provide bases for Mercian military operations into Danish territory. She constructed ten fortified garrison towns for ten years.

Illness And Death Of Lord Of Mercia

After Aethelred died in 911 AD, she officially took over the power. She continued the process of building defensive forts and joined forces with her brother Edward the Elder (r. 899–924) to protect the territories against the Danes.

In 916, she sent an expedition against Wales as revenge for the murder of a Mercian bishop, attacking and destroying Brecenanmere in Powys County. The Anglo-Saxon Chronicle confirms that in 916 AD, Brecenanmere (in English: lake) was damaged by the Mercian queen Aethelflaed and that she captured the wife of the king of Brecon and 34 others. (3).

She also "led an alliance of Briton, Picts, and Scots rulers against a large group of Norwegian and Irish-Norwegian invaders, who crossed the channel from Brittany in 914…" (Toler). 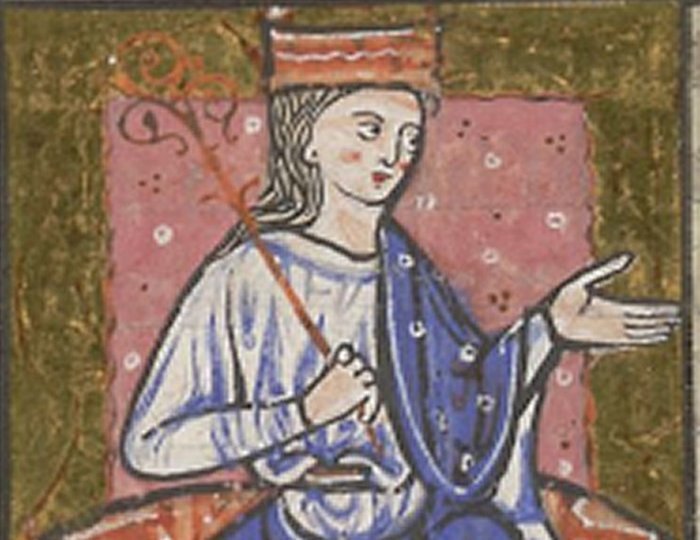 Aethelflaed from The Cartulary and Customs of Abingdon Abbey, c. 1220. Source

The Lady's army recovered Derby a year later, occupied by the Vikings. Shortly afterward, the Viking leaders of York offered her their loyalty. Unfortunately, this tremendous female fighter died only days before the Danes would have surrendered York to her, recognizing her as their overlord.

She fell in battle at Tamworth in Staffordshire. No records survived to tell what Aethelflaed died off, but perhaps it was due to severe wounds; she was about 50 years old woman. Her body was carried 75 miles (121 km) from Tamworth to Gloucester, where she was buried with her husband. It was a speedy procession, as it is doubtful that her body was embalmed.

In the words of the Annals of Ulster, she was Famosissima Regina Saxonium, the "most famous Queen of the Saxons."

She was mourned throughout the land. Even the enemy, the Danes, recognized her as a more than worthy enemy.

The Annals of Ulster recorded the death of the 'most famous queen of the Saxons', and the Annales Cambriae recorded that 'Queen Æthelflæd died.' Is it possible they used the royal title because they didn't know what else to call her?

However, as Toler writes, "most of the surviving written sources for English history, most notably the Anglo-Saxon Chronicle, focus on Edward's kingdom of Wessex, which ultimately triumphed in the struggle for control of England."

Two hundred years after the Lady Of Mercia died, English chronicler William of Malmesbury (1080–1143) described her as a warrior who "protected men at home and intimidated them abroad." He argued she "ought not to be forgotten, as she was a powerful accession to his [Edward's] party."

It is almost a coincidence that we know about this brave lady warrior and her contributions. Usually, she is only referred to as Edward's sister, and even her title of Lady of the Mercians is omitted.

Whitehead, A.. Mercia: The Rise and Fall of a Kingdom

S.Lewis, A Topographical Dictionary of Wales