Conny Waters - AncientPages.com - This unusual figure is unique in many ways. It represents a winged half-human and half-animal creature credited with supernatural powers. It is made of silver and electrum and dates back to the latter half of the 3rd millennium B.C.

The figure is about 12 cm high up to the top of the head.

As you can see, this being squats with his left knee up, directs his face slightly upward, and extends both his arms forward.
A pair of large electrum wings, with engraved sword-shaped feathers, come out from each side of his upper arms. Each limb has four talons at its end. The figure's hair is shown in tufts by a herringbone-like pattern over its back, and his face, including the forehead and ears and the base of the neck, are covered by thin electrum sheet. 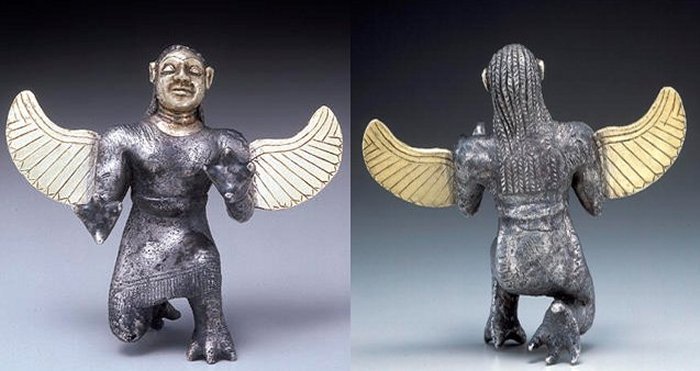 The small electrum figure sits straight, with firmly folded hind limbs with both legs shown to the right and left. Each limb has a hoof of the ungulate type at its end. The figure's right arm is held up with the hoof's bottom directed forward while its left arm is held with the bottom of the hoof directed toward the abdomen.
The head has two three-forked ox-like horns, and slightly wavy hair is parted in the middle and hangs over the back.

Based on current archaeological discoveries, no similar example of this horn type is known as yet. It shouldn't be dismissed that a threefold horn or horn tassel may have been intended.
There are, however, examples of similar statues representing the Mesopotamian style in southern Iran. One of them is a small copper figure of the 3rd millennium B.C., which derives from Elam.

The creature is slightly similar to the lamassu, an Assyrian protective deity, often depicted as having a human's head, a body of an ox or a lion, and bird's wings. 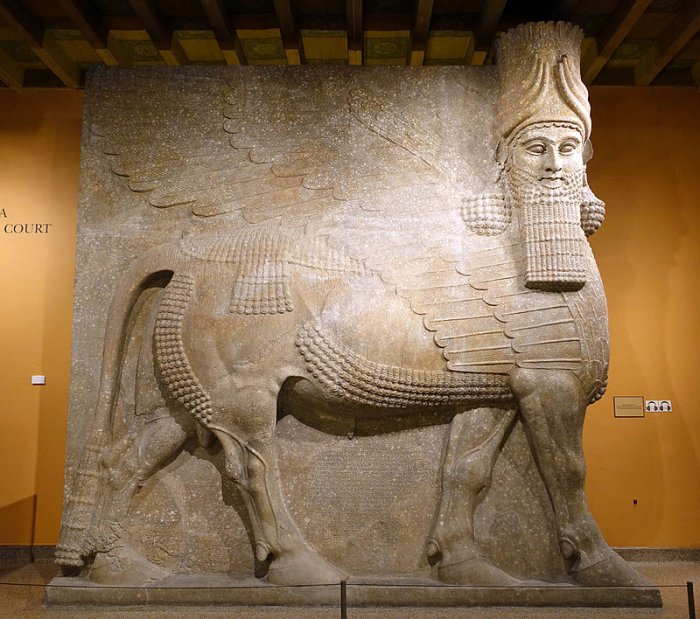 It is not unusual to encounter representation of the hair in the silver figure of eastern Iranian art. Half-naked figures are also commonly seen in ancient West Asian art. The squatting or straight posture in figures wearing large girdles and kilts is found particularly in southeastern Iran's cylinder seals and stone vessels.

First version of this article was originally published on June 5, 2015