Ellen Lloyd - AncientPages.com - A strange artifact was found in 1847 in a bog in Balkåkra a village in south of Skåne, near the town Ystad, Sweden. The object suggests some form of ritual use within the religion of the Bronze Age.

A local teacher sent the find by steamboat to the Museum of National Antiquities in Stockholm. There is no further information available about the find circumstances, and the exact find place has never been located.

There are different opinions regarding its original purpose. It remains unclear whether this was an ancient drum, a sun altar, a gong, a throne, or something else. An identical bronze object was found in a two-meter-deep sandpit at Hasfalva (then called Haschendorf) near Sopron in northern Hungary, in 1913.

It is likely that they were manufactured by the same craftsman in the same workshop (one of the first examples of serial production?), located somewhere in Central Europe, probably the Donau area in the early Bronze Age (1500 years BC). 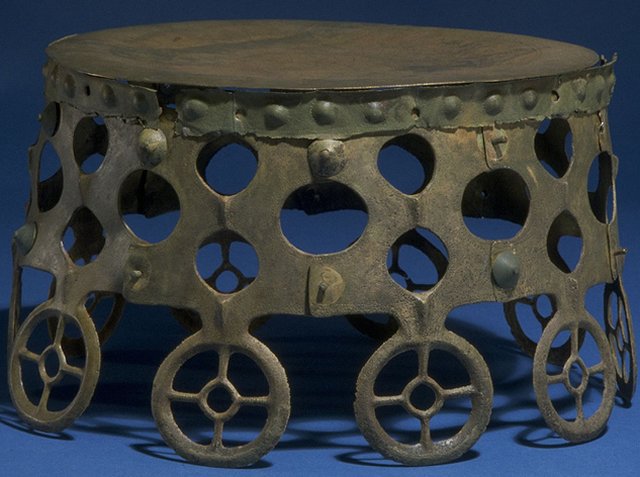 The Balkåkra artifact. It consists of a bronze disc ca. 41 cm in diameter and resting on a bronze frame, height ca. 28 cm. It was found in a peat bog in Balkåkra Parish in southern Sweden and is dated to the Early Bronze Age, approx. 1500 – 1300 BC. Photo credits: G. Jansson, Museum of National Antiquities, Stockholm

The object from Balkåkra consists of a dish-shaped disc with zigzag-lines, similar to a sun depiction. It is attached to an open-work frame ending with wheel symbols that signify movement, and the discs have been interpreted as symbols of the sun.

The frame is composed of 10 parts that are put together with rivets. On each module, there are lines or dots. They show the place of the module in the structure.

Scandinavian archaeologists date the objects to c. 1500 BC while their Hungarian colleagues date them to 1000-800 BC. First metal analyses of the objects were made in 1985.

Metal analyses of the Balkåkra disc resulted in the values 89 % copper and 10 % tin, with silver, lead and iron together comprising the remaining 1 %; the results were about the same for the disc from Hasfalva, Hungary.
What is unique about these two objects is their size and appearance. They pose a mystery because we do not know function in the prehistoric society in which they were created. Both objects were found upside down, such that the disc lay at the bottom with the frame resting on it and the wheels facing upwards. It is presumed that this was the position used when the objects were stored or transported.

Many archaeologists have suggested the Balkåkra disc was a drum used in the Bronze-Age cult of the Sun, but for now, these are mere speculations and we do not know the true purpose of this enigmatic object.