Ellen Lloyd - AncientPages.com - In this top list we take a closer look at striking examples of advanced ancient technologies that were far ahead of their times. 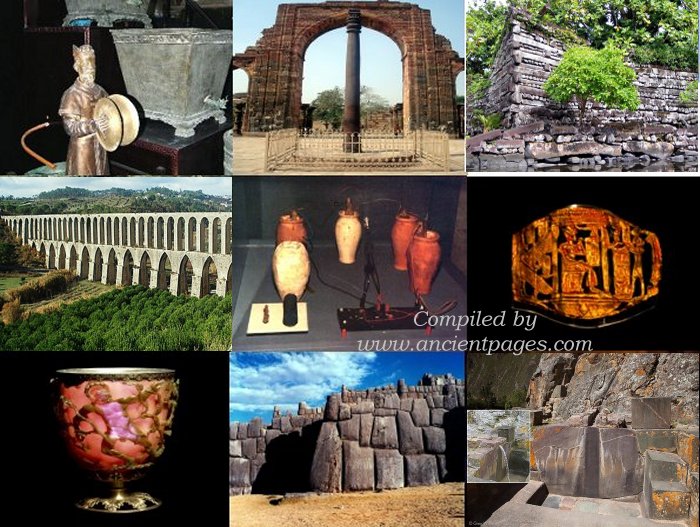 Some of these sophisticated ancient inventions were later re-invented by our modern society, but not all. There is no doubt ancient people possessed highly advanced knowledge in a number of areas. 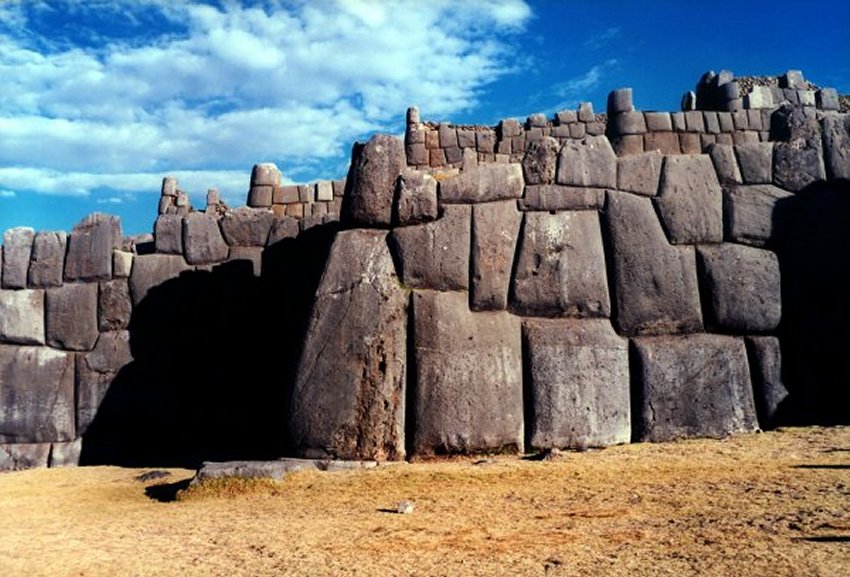 Sacsayhuamán is a citadel on the northern outskirts of the city of Cusco, Peru, the historic capital of the Inca Empire.

Archaeologists and other scientists have been scratching their heads trying to figure out how remarkable ancient Peruvian structures like Sacsayhuamán were constructed. This marvelous structure consists of gigantic stones so heavy that our modern machinery can hardly move and put in place. Does the key to the puzzle lie in a certain very specific plant that gave the ancient Peruvians possibility to soften stone or is the answer to the mystery access to advanced ancient technology that could melt stone?

According to researchers Jan Peter de Jong , Christopher Jordan Jesus Gamarra, the granite walls in Cuzco show evidence of being heated to a very high degree and vitrified- the outside surface becoming glassy and very smooth. Based on this observation, Jong, Jordan and Gamarra draw the conclusion that "some sort of high tech device was used to melt stone blocks which were then placed and allowed to cool next to hard, jigsaw-polygonal blocks that were already in place.

Researchers Jong and Jordan propose that several ancient civilizations world-wide were familiar with the high-tech melting of stone technology. They also say that "the stones on some of the ancient streets in Cuzco have been vitrified by some high temperature to give them their characteristic glassy texture. Read more 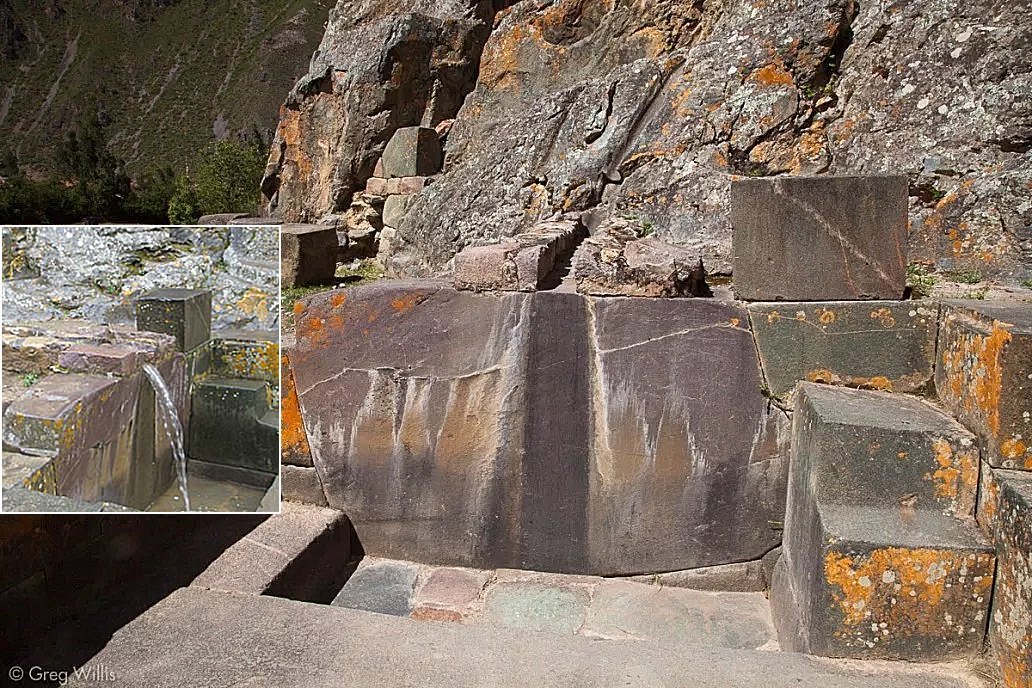 One of many fountains of the Incamisana Water Temple. Image credit: Greg Willis

The Incas were known for their engineering practices, particularly in regard to water engineering. Their design of water systems was influenced by their strong beliefs in power of water.

They saw water as both a physical and spiritual phenomenon. They considered their great civilization as something that arises from water.

The Incamisana temple at Ollantaytambo in Peru was constructed for worship of deities who gave the Inca people water and water itself. Even today in our modern terms, the structure represents the Inca’s masterpiece of both civil engineering and construction. It was designed to focus on religious ceremonies and offerings.

It’s definitely a truly remarkable achievement especially, if we consider the region’s harsh weather and the altitude of 2,792 m (9,160 ft) above sea level.

Flooding that took place in 1679 damaged the temple, but the deposit of sediment fortunately preserved the lower portion of it. Read more 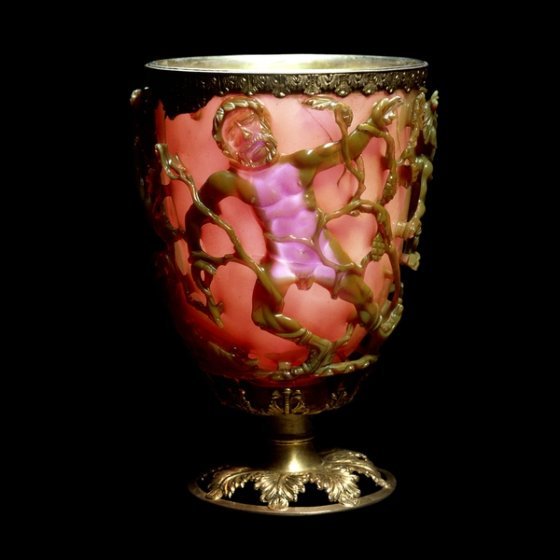 This amazing artifact clearly shows that our ancestors were far ahead of their time. In fact they were so advanced that they may even have been inventors of what we today call nanotechnology. This extraordinary cup is the only surviving complete example made from dichroic glass, which changes colour when held up to the light. When light is shone through the body of the cup it turns from opaque green to a glowing translucent red. The glass contains tiny amounts of colloidal gold and silver, which give it these unusual optical properties. Read more

Another good example revealing our ancestors were familiar with nanotechnology are the strange microscopically small nanospirals within material that had to be at least 100,000 years old have been detected in several places, during a routine investigation of mineral deposits in the Ural Mountains in 1992. The origin of these extraordinary but strange artifacts that the human eye can barely see - is still not explained. Read more

4. Batteries In The Ancient World 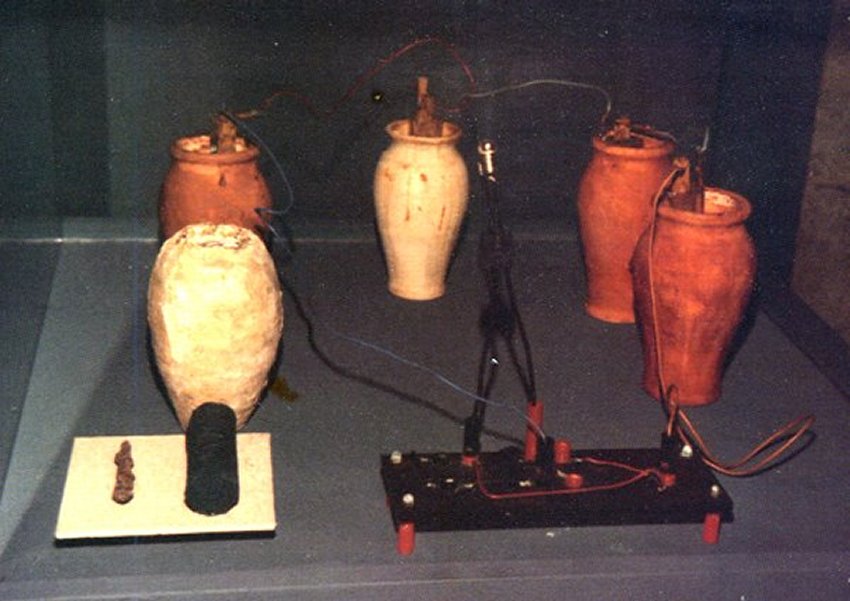 A small, undecorated artifact with rather plain appearance, is believed by some scientists to be an example of a prehistoric, electrical power source. It's the so-called Baghdad Battery, also known as the Parthian Battery. The artifact - thought to be a 2,000-year-old electric battery - was found in 1936 by railroad workers in the area of Tel Khujut Rabu, south of Baghdad. Most sources date the batteries to around 200 BC, but the first known electric battery - the Voltaic pile - was not invented by Italian physicist Alessandro Volta until 1799.

The bottoms of these mysterious cylinders were capped with copper discs and sealed with bitumen or asphalt. Another insulating layer of bitumen sealed the tops of the pots and held in place iron rods suspended into the center of the copper cylinders. The rods showed a strong evidence of having been corroded by an acid solution that evaporated long ago. Read more 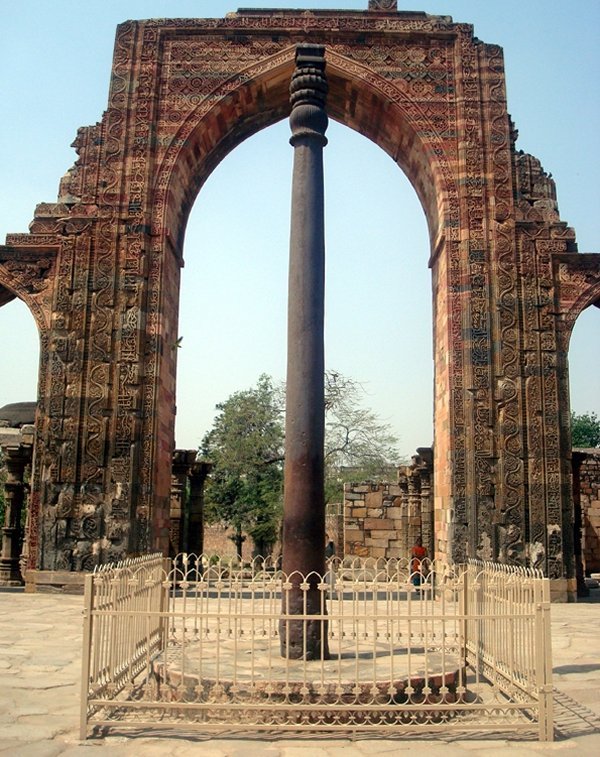 The column in India - made up of 98% wrought iron of impure quality - not in any way welded together - seems to have been forged as a single, gigantic piece of iron.

The Antediluvians had technologies that matched our own; there are also serious indications that in certain areas they even possessed extraordinary knowledge, which has only hardly been nudged by our present-day science. Highly advanced hardening techniques of the ancients as well as ancient castings of large pieces were widespread in antiquity. Our ancestors were in possession of an extremely sophisticated scientific knowledge of metalworking from an earlier civilization and evidence of this knowledge was found in different parts of the world. China with a long history in metallurgy, was the earliest civilization that manufactured cast iron and some of the ancient Chinese feats of casting iron are so impressive as to be almost unbelievable.

Ancient Indians, for example, produced iron capable of withstanding corrosion, most likely due to the high phosphorus content of the iron produced during those times. A column of cast iron 23 feet (7 meters) high, weighing approximately 6 tons with diameter of 16.4 inches stands in the courtyard of Kutb Minar in Delhi, India.

An inscription in the Sanskrit language informs that the column was originally erected in the temple of Muttra and capped with Garuda - "Messenger of the Gods" - an image of the bird incarnation of the god Vishnu, the Indian god known as "The Preserver". Read more

6. Aqueducts Are Among Most Exceptional Achievements Of Ancient Roman Engineers 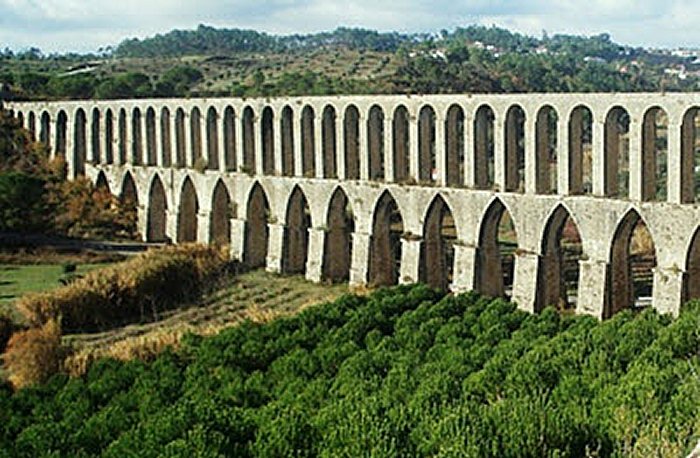 In 312 BC, a Roman politician Appius Claudius Caecus ordered that an aqueduct be built to supply Rome with water. The aqueduct was one of two major Roman projects carried out during this period; the other was a road for military purposes.

Among all the achievements of ancient engineering, Roman aqueducts belong to the most exceptional ones.

Engineers in ancient Roman Empire knew that one of the most fundamental requirements for any town or city to exist is to supply it with water, because it is basic human need.

The city must have water to drink, cook and clean, but it also must have all indispensable arrangements to remove unwanted water. Both ancient and modern Rome has been well supplied with the means for delivering water to the city and taking it away.

Ancient Romans were highly skilled engineers. By the early fourth century AD, Rome was being supplied by more than twelve aqueducts, which cooperatively could bring more than a million cubic meters of fresh water to the city every day! This massive amount of water was delivered to Rome’s inhabitants through a complex network of tanks and pipes and to about 1,500 public fountains, pools and almost 900 public and private baths. Read more 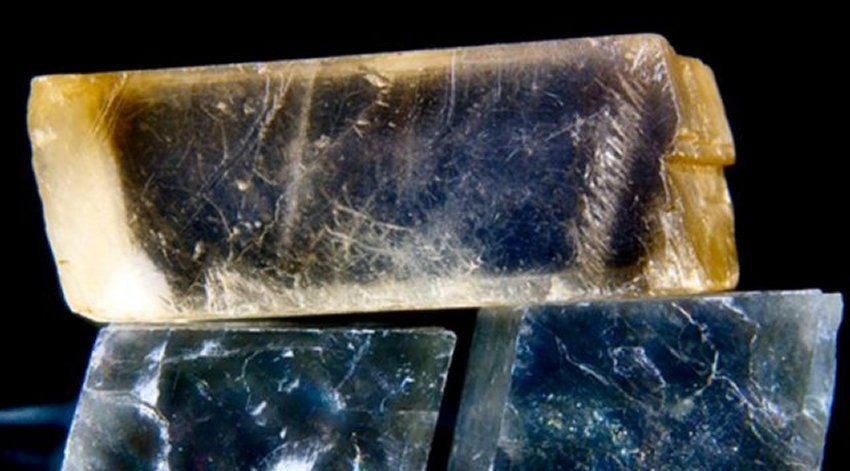 In Viking times the magical Sun Stone showed sailors road when the sun went down.

The Norse sagas mention a mysterious "sunstone" - a magical stone which showed sailors road when the sun disappeared. Now researchers say the stone is real and it's a special crystal. One of the reasons why the existences of sunstones have long been disputed is because they are contained in the saga of Saint Olaf, a tale with many magical elements. However, this has changed and now.

Sunstones can no longer be considered just a myth. Archaeologists have discovered a special crystal that suggests legendary Viking sunstones did exists in reality. Read more 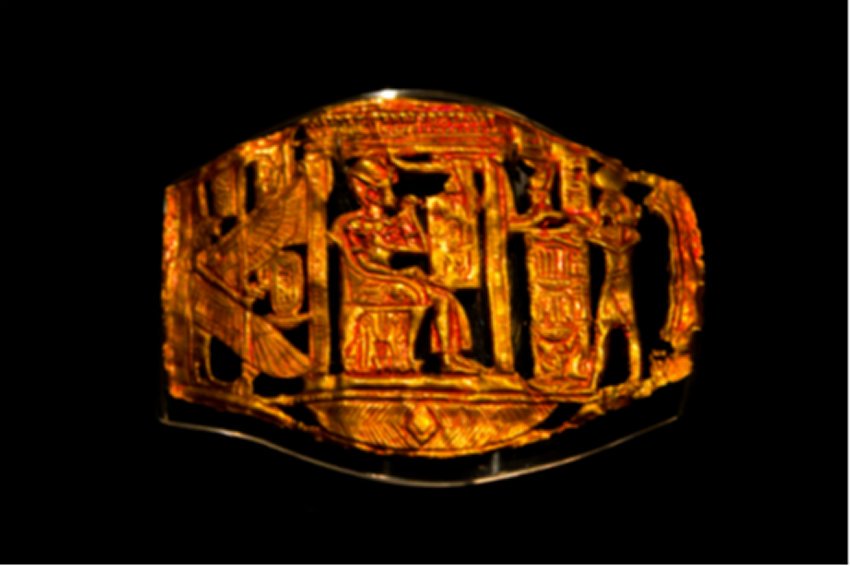 Sometimes, the technology was used to apply real gold and silver. It also was used fraudulently, to make cheap metal statues that look like solid gold or silver.

Ancients were in possession of very sophisticated knowledge. Ancient gold and silversmiths used mercury, which was produced more than 8,000 years ago in Turkey. Mercury was used for gilding (domes, interiors of cathedrals, religious figures and more) in many parts of the ancient world. Many of the ancients' techniques are still unknown. They were so skilled that some of the quality they achieved has still not been matched. In ancient times, these sophisticated methods were used to produce and decorate different types of artefacts, such as jewels, statues, amulets, and commonly-used objects.

Gilders performed these processes not only to decorate objects but also to simulate the appearance of gold or silver, sometimes fraudulently. From a technological point of view, the aim of these workmen over 2000 years ago was to make the precious metal coatings as thin and adherent as possible.

This was in order to save expensive metals and to improve the resistance to the wear caused by continued use and circulation. Recent findings confirm the high level of competence reached by the ancient artists and craftsmen and stresses an artistic quality of the objects they produced could not be bettered in ancient times and has not yet been reached in modern ones. Read more 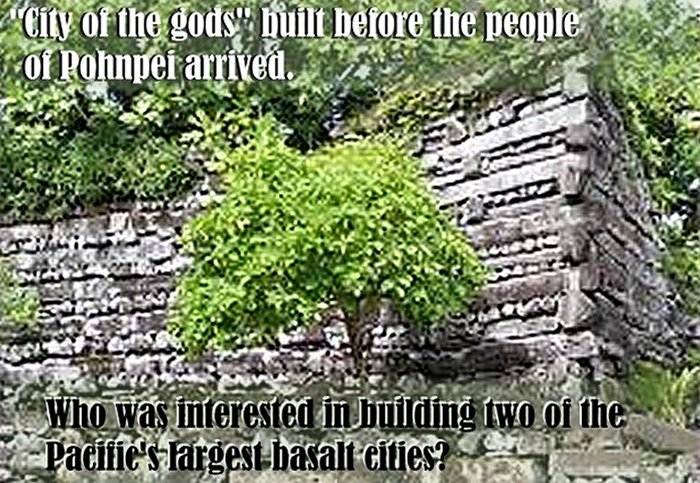 Two very remarkable islands - Kosrae and Pohnpei ("upon a stone altar") - can be found in the Caroline Islands, a widely scattered archipelago located in the western Pacific Ocean, to the north of New Guinea and more than 1,500 miles to the east of the Philippines.

These two places are full of mysteries, particularly because of bizarre remains of ancient architecture, in form of very old megalithic cities, of which origin no one is able to guess."

Those, who do not invalidate the myths and legends of the ancients, can ponder over some interesting legends and myths. One of them says that "magic powers" were used to transport the logs from a far-away location, by making them fly and yet another legend supports the latter, saying about a mighty "magician" who made the logs fly towards Nan Madol, where the city was constructed and a firebreathing dragon became its symbol.
Who was interested in building two of the Pacific's largest basalt cities? Read more

There are many examples of robots that were created in ancient China.

In ancient China we come across a number of highly advanced robots that could sing, dance, act like servants and perform many other surprising tasks. Some of these remarkable robots are even said to have possessed life-like organs such as bones, muscles, joints, skin and hair. It’s a quite remarkable considering it is only recently our modern civilization has started to develop human-like robots. There is no doubt mechanical engineering in ancient China reached a very high level.

Readers of Ancient pages are familiar with the incredible ancient machines invented by Hero of Alexandria, or the remarkable Talos robot, but there are many more great examples of ancient robotics discovered in various corners of the world. History of robots in ancient China can be traced far back in time. Robots existed not only during, but also before the Tang Dynasty (618–907 AD). Read more