Ellen Lloyd - AncientPages.com - In Celtic mythology Taranis was the mighty god of thunder. In Welsh and Breton the word for thunder is taran. Taranis is not as famous as Thor, the Norse god of thunder, Perun, the Slavic god who is also associated with thunder, or Indra, the Vedic god who is frequently depicted holding and using vajra, a terrifying, light throwing thunderbolt.

Taranis As A Celtic God Of Thunder

Nevertheless, ancient Roman inscriptions reveal Taranis was once worshiped by the Celts as a deity with authority over weather and the sky in general. He was identified with the ancient Roman god Jupiter, who was associated with thunder, lightning, and storms. In addition to this, there is evidence Taranis was also the Celtic wheel god. 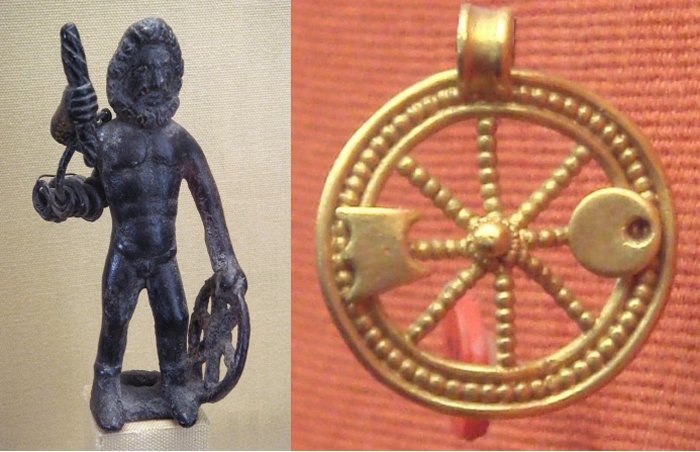 Based on archaeological findings it has been established that Taranis was worshipped not only in Gaul, Britain and Ireland, but also in regions like Rhineland and Danube.

It is difficult to determine the importance of Taranis, but Lucan, the first Roman poet considered him one of the three most dominant Celtic deities. Unfortunately, there are few surviving inscriptions and those that have been found are geographically widespread, making it hard to say how much attention the Celts payed to Taranis.

“At Tours and Orgon (both France) dedications to ‘Thunder’ were probably intended as references to this deity. The same probably applied to dedications to the ‘Thunderer’ at Böckingen and Godramstein (western Germany) and also at Scardona (Croatia).

This last inscription, along with another from Thauron (France), explicitly equated Taranis with Jupiter.”

“Taranis may also have had connections with the Underworld since a medieval monastic commentator on Lucan (living in Berne, Switzerland) equated Taranis with Dis Pater (or Pluto), the god of the Underworld.” 1

“The human victims were in the first place propitiatory, to appease angry gods, but they were also offered for thanksgiving. Even wives and children were sacrificed before a battle to ensure victory. Prisoners were immolated after a victory in thanksgiving to the gods—Lucan speaks of the cruel sacrifices offered by tribes in Gaul dwelling between the Seine and the Loire to such deities as Teutatis, Esus, and Taranis. Cæsar says that persons in extreme sickness or who are exposed to the perils of war, sacrifice human victims or vow to do so, employing the Druids to carry out the rite. 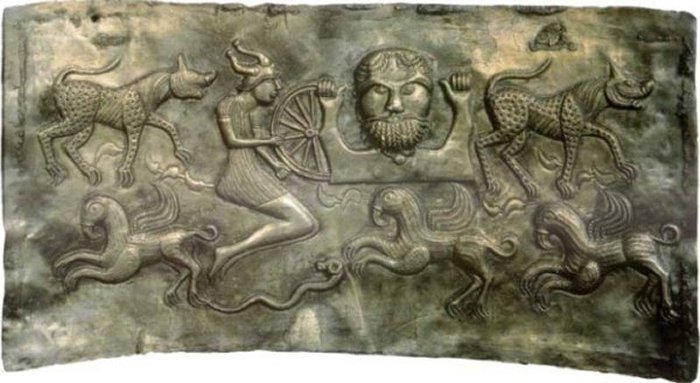 Gundestrup cauldron, created between 200 BCE and 300 CE, is thought to have a depiction of Taranis on the inner wall of cauldron. Credit: Public Domain.

They believe that unless a life is given for a life the majesty of the immortal gods cannot be appeased. Such sacrifices were made by private individuals or in public ceremonies. He speaks of one public ceremony which for horror cannot be surpassed. Figures of immense size, their limbs made of wicker, were filled with human victims, and set on fire. The victims pleasing to the gods were thieves or other criminals. 2

Taranis was usually depicted as bearded god with a thunderbolt in one hand and a wheel in the other.

Taranis As A Celtic Wheel God

His connection to the wheel is quite interesting. The wheel was an important Celtic symbol often depicted on coins, but it can also be found on the beautiful Gundestrup Cauldron, a magnificent vessel made from richly decorated plates of silver that were assembled into a single cauldron.

Archaeologists have unearthed thousands of votive wheels called Rouelles in sanctuaries in Belgic Gaul. It is believed these ancient artifacts dating from 50 B.C. to 50 C.E. correspond to the cult of Taranis.

One of the reasons why so many votive wheels have been found in sanctuaries is because a wheel could represent a full chariot. As the chariot was the vehicle of the celestial gods, it was also associated with the Sun and Moon. 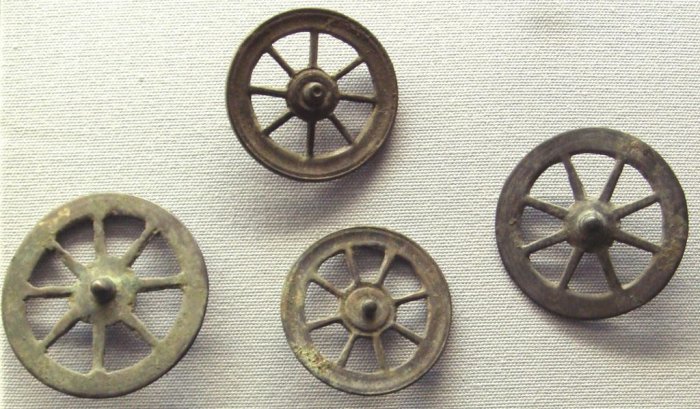 As previously mentioned, many “depictions of the God-of-the-Wheel resemble Jupiter and they bear his attributes of eagle and thunderbolt. The wheel as a symbol is certainly Celtic rather than Roman. Therefore, in both a literary source and in iconography, a Celtic divinity has been “equated” with a classical one. If the Celtic version of Jupiter was named Taranis and if a Celtic attribute appears on archaeological depictions of the Roman god, it seems not unreasonable to suppose that these archaeological representations must symbolize a Celto-Roman deity who was very possibly referred to by his worshippers as “Jupiter-Taranis’”. 3

Very few inscriptions to Taranis have been unearthed making him a rather obscure god, but it doesn’t necessarily mean he was insignificant to our ancestors.