AncientPages.com - A 17th-century dolls’ house must number among the more unusual source “texts” through which we can find out about women’s lives in the past. Yet, for Petronella Oortman (1656-1716), this exquisite object forms an important window into the creative and imaginative life of a wealthy, married woman in Amsterdam.

Petronella came from a large family of seven children and grew up on the Singel canal. Her father was a gun-maker. She began to construct her dolls’ house as an adult, during her second marriage to a silk merchant, Johannes Brandt. Petronella’s dolls’ house appears to have been made in the late 1680s before the birth of four children. 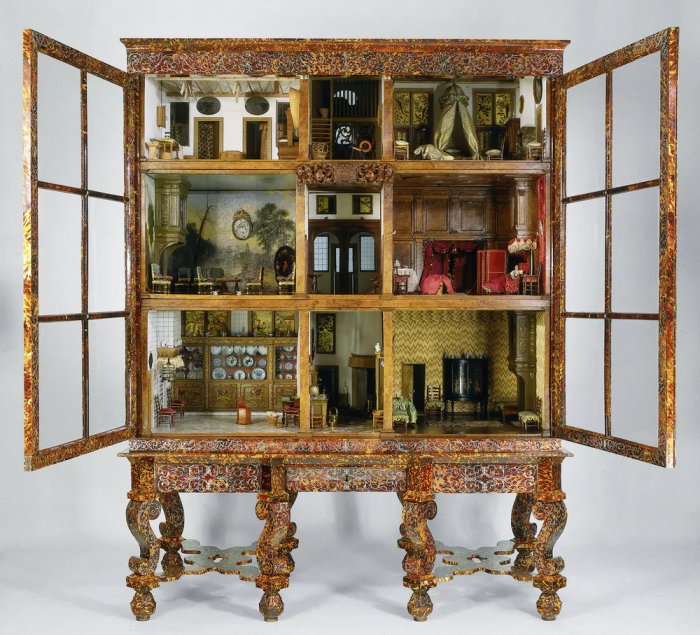 Petronella was one of a small group of wealthy Dutch women who created exquisitely crafted dolls’ houses in the late 17th and early 18th centuries. Like her female contemporaries, she spent vast sums of money on creating and decorating her house, commissioning artwork and furniture for her miniature world from leading manufacturers and artists of the day.

The house itself, made of tortoiseshell with pewter inlay, was crafted by a French cabinetmaker. It was over two and a half metres high and almost two metres wide. Some women kept detailed notebooks about their additions, expenses and renovations to their houses. Petronella’s house was even painted by a local artist, Jacob Appel, showing it full of life.

When Petronella died at the age of 60, her dolls’ house passed to her only living daughter, Hendrina. These houses were often mentioned in their owners’ wills as important possessions to be passed on through the family (usually female) line.

Petronella’s house, today one of the most popular exhibits in Amsterdam’s Rijksmuseum, was not a children’s toy. It was likely only opened at adult parties for people to marvel at the clever craftsmanship, as well as the creative vision and wealth of its owner.

So what can we learn about Petronella, and women like her, from her miniature house? Unlike other dolls’ houses that we know existed at this time, those made by these Dutch women each contained a nursery and lying-in room. This was a special room the mother occupied for up to six weeks after the birth of a baby, where she received visitors and held parties. 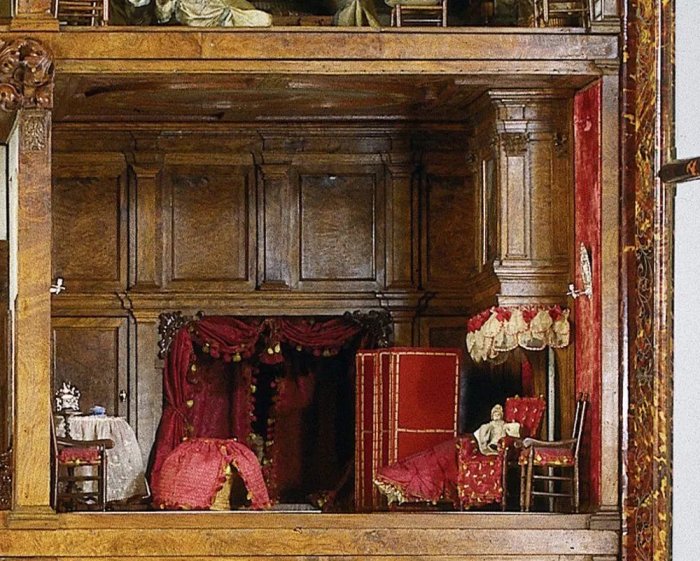 Having a dedicated lying-in room was unusual, as most people just held their parties in their best and warmest room. People took these celebrations very seriously, because the birth of a healthy child was important. The inclusion of such rooms reflected the importance for wealthy women of bearing children, and also its joys when mother and child came through the experience safe and sound.

But Petronella’s arrangement may have originally recorded other feelings too. Appel’s painting of the dolls’ house shows a layout that we no longer see in it today. In one room, he depicts a laid out infant surrounded by other living children. This may reflect Petronella’s mourning for the loss of her firstborn child.

Over the course of her ten-year marriage to her first husband, silk merchant Carel Witte, Petronella had had a daughter but she had died in 1684, less than 12 months old. Carel himself passed away the following year. 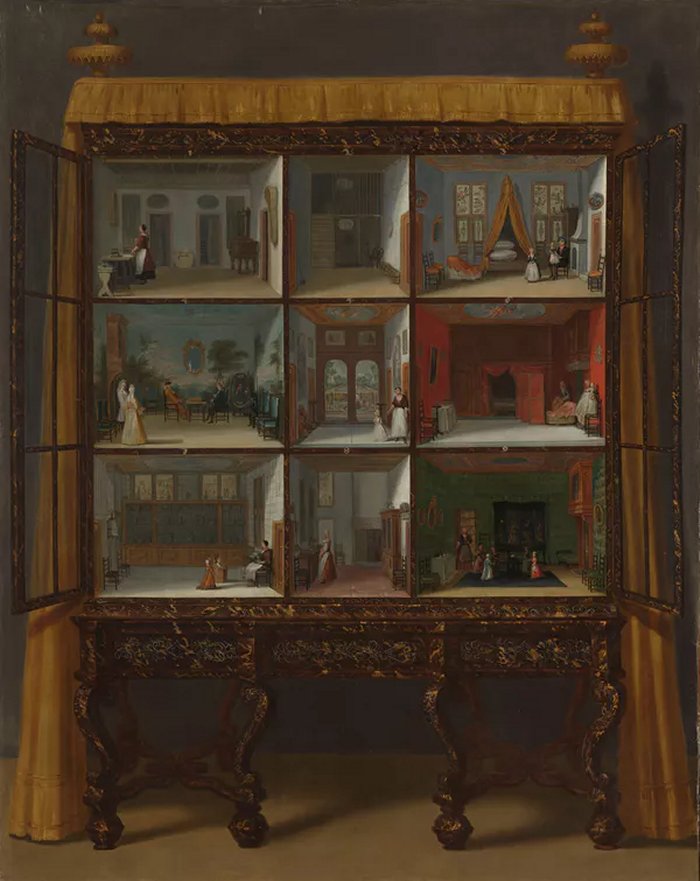 Petronella’s dolls’ house also had a special linen or laundry room. In 17th-century Dutch society, wealthy people sent out their linen to be washed and bleached and it was then returned to the house for drying and ironing.

Often this might be done just once a year, with maids hired specially to carry out the household part of the laundry process. The less frequently you did this, the richer it showed you were, because it meant that you had a lot of linen to spare when it got dirty. 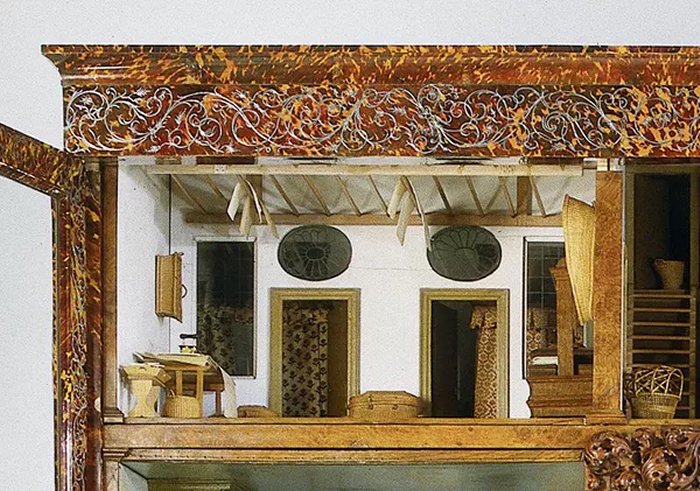 Petronella’s dolls’ house had special places for the maidservants to sleep, each with different fabrics for the maids’ beds, its own chair and chamberpot. These dolls’ houses also had foot-warmers, a special box where warm coals from the fire were placed, which women rested their feet on underneath their skirts. Women putting together dolls’ houses thought of such things - after all, it was women who traditionally sat furthest away from the fire.

Petronella’s house also has a beautiful kitchen full of fashionable blue and white china. The houses of some other women even had two kitchens - a working one and a “best kitchen” where you might invite your friends and show off your best crockery.

Writing her own history

Unfortunately not much more is known about Petronella’s life. There are no known portraits of her. But we can interpret her dolls’ house as a kind of ego-document, or self-narrative, that presented a vision of her as she wanted to be remembered by future generations.

It was a vision that her widower respected, preserving his wife’s creation intact after her death. An

eye-witness recorded visiting the Brandt home in 1718 where Johannes and his daughter reverently showed him the beautiful house Petronella had created. 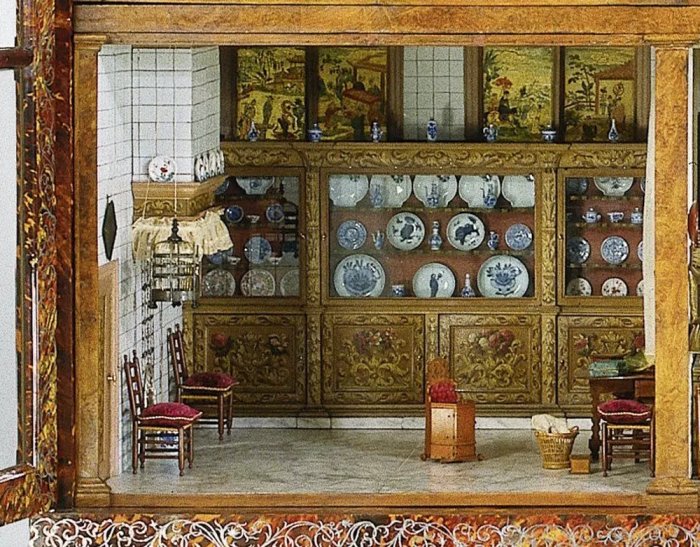 Her dolls’ house partly conformed to contemporary expectations of wealthy women. Books from that era suggested that girls should play with toys that could teach them how to become useful housewives. Girls were given pots to polish or dresses to sew for dolls. Thus, when rich women like Petronella thought about what their fantasy home would look like, perhaps it was indeed one with gleaming pots, dishes and fine china in their kitchens, lots of linen and the maids to manage it, and the joy of healthy babies to celebrate.

Ancient Quest For Mechanical Life: Humanoid Robots Of Our Ancestors

Women’s real domestic work was never far removed from these creative objects. Most were in cabinets based on the design for linen and clothing cupboards, and some contained drawers for clothing as well as the dolls’ house. So the real and the imagined worlds of the household interacted in these spaces.

Yet Petronella’s house shows us that it was possible for an elite female patron to find a creative way to operate with these expectations and still signal her wealth and status, engage with the artistic milieu of her era, and craft an identity of her own.