AncientPages.com - Sexuality was central to life in ancient Mesopotamia, an area of the Ancient Near East often described as the cradle of western civilisation roughly corresponding to modern-day Iraq, Kuwait, and parts of Syria, Iran and Turkey. It was not only so for everyday humans but for kings and even deities.

The “Burney Relief,” which is believed to represent either Ishtar, the Mesopotamian goddess of love and war, or her older sister Ereshkigal, Queen of the underworld (c. 19th or 18th century BC) - BabelStone

Mesopotamian deities shared many human experiences, with gods marrying, procreating and sharing households and familial duties. However when love went wrong, the consequences could be dire in both heaven and on earth.

Scholars have observed the similarities between the divine “marriage machine” found in ancient literary works and the historical courtship of mortals, although it is difficult to disentangle the two, most famously in so-called “sacred marriages”, which saw Mesopotamian kings marrying deities.

Gods, being immortal and generally of superior status to humans, did not strictly need sexual intercourse for population maintenance, yet the practicalities of the matter seem to have done little to curb their enthusiasm.

Sexual relationships between Mesopotamian deities provided inspiration for a rich variety of narratives. These include Sumerian myths such as Enlil and Ninlil and Enki and Ninhursag, where the complicated sexual interactions between deities was shown to involve trickery, deception and disguise. 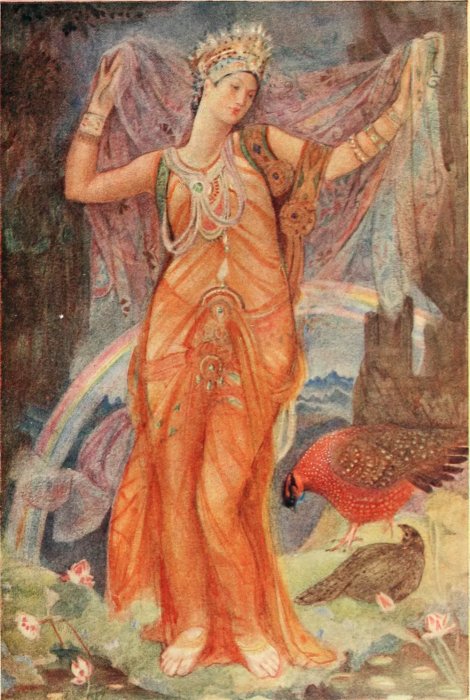 The goddess Ishtar as depicted in Myths and legends of Babylonia & Assyria, 1916, by Lewis Spence. Credit: Public Domain

In both myths, a male deity adopts a disguise, and then attempts to gain sexual access to the female deity — or to avoid his lover’s pursuit. In the first, the goddess Ninlil follows her lover Enlil down into the Underworld, and barters sexual favours for information on Enlil’s whereabouts. The provision of a false identity in these myths is used to circumnavigate societal expectations of sex and fidelity.

Sexual betrayal could spell doom not only for errant lovers but for the whole of society. When the Queen of the Underworld, Ereshkigal, is abandoned by her lover, Nergal, she threatens to raise the dead unless he is returned to her, alluding to her right to sexual satiety.

Adapa – Why Did The Wise Apkallu Refuse The Gift Of Immortality?

Was Alulim, First King Of Sumer And Eridu Biblical Adam?

The goddess Ishtar makes the same threat in the face of a romantic rejection from the king of Uruk in the Epic of Gilgamesh. It is interesting to note that both Ishtar and Ereshkigal, who are sisters, use one of the most potent threats at their disposal to address matters of the heart.

The plots of these myths highlight the potential for deceit to create alienation between lovers during courtship. The less-than-smooth course of love in these myths, and their complex use of literary imagery, have drawn scholarly comparisons with the works of Shakespeare.

Ancient authors of Sumerian love poetry, depicting the exploits of divine couples, show a wealth of practical knowledge on the stages of female sexual arousal. It’s thought by some scholars that this poetry may have historically had an educational purpose: to teach inexperienced young lovers in ancient Mesopotamia about intercourse. It’s also been suggested the texts had religious purposes, or possibly magical potency.

Several texts write of the courtship of a divine couple, Inanna (the Semitic equivalent of Ishtar) and her lover, the shepherd deity Dumuzi. The closeness of the lovers is shown through a sophisticated combination of poetry and sensuousness imagery. 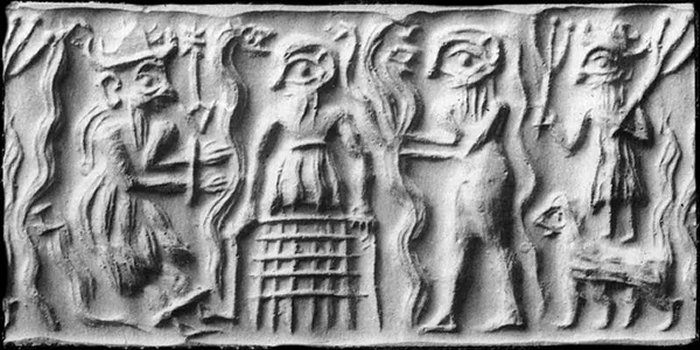 Female and male genitals could be celebrated in poetry, the presence of dark pubic hair on the goddess’ vulva is poetically described through the symbolism of a flock of ducks on a well-watered field or a narrow doorway framed in glossy black lapis-lazuli.

The representation of genitals may also have served a religious function: temple inventories have revealed votive models of pubic triangles, some made of clay or bronze. Votive offerings in the shape of vulvae have been found in the city of Assur from before 1000 BC.

Divine sex was not the sole preserve of the gods, but could also involve the human king. Few topics from Mesopotamia have captured the imagination as much as the concept of sacred marriage. In this tradition, the historical Mesopotamian king would be married to the goddess of love, Ishtar. There is literary evidence for such marriages from very early Mesopotamia, before 2300 BC, and the concept persevered into much later periods.

The relationship between historical kings and Mesopotamian deities was considered crucial to the successful continuation of earthly and cosmic order. For the Mesopotamian monarch, then, the sexual relationship with the goddess of love most likely involved a certain amount of pressure to perform.

Some scholars have suggested these marriages involved a physical expression between the king and another person (such as a priestess) embodying the goddess. The general view now is that if there were a physical enactment to a sacred marriage ritual it would have been conducted on a symbolic level rather than a carnal one, with the king perhaps sharing his bed with a statue of the deity.

Agricultural imagery was often used to describe the union of goddess and king. Honey, for instance, is described as sweet like the goddess’ mouth and vulva.

In the bedchamber dripping with honey let us enjoy over and over your allure, the sweet thing. Lad, let me do the sweetest things to you. My precious sweet, let me bring you honey.

Sex in this love poetry is depicted as a pleasurable activity that enhanced loving feelings of intimacy. This sense of increased closeness was considered to bring joy to the heart of the goddess, resulting in good fortune and abundance for the entire community — perhaps demonstrating an early Mesopotamian version of the adage “happy wife, happy life”.

While dishonesty between lovers could lead to alienation, positive sexual interactions held countless benefits, including greater intimacy and lasting happiness.