Ellen Lloyd - AncientPages.com - Ageing is a natural process, but many people have difficulties accepting they will become older and one day die. Using high-tech, modern people attempt to find a way to become immortal. Our ancestors searched for the elixir of life and the fountain of youth to stay young as long as possible. 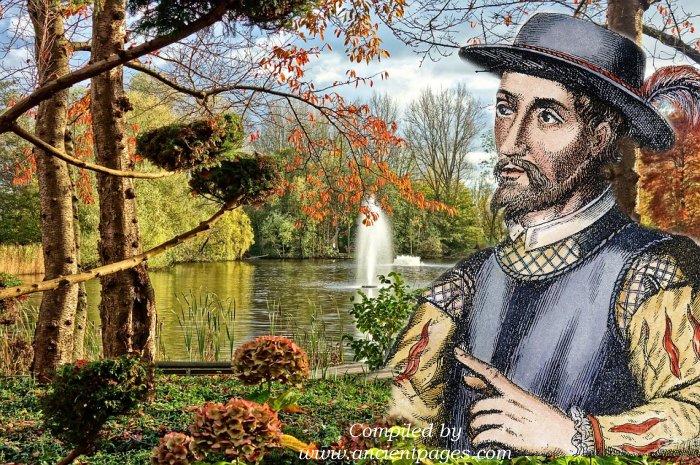 The fountain of youth is mentioned in many ancient myths, legends and manuscripts. People have searched for this mysterious place all over the world. Almost every ancient culture was familiar with the fountain of youth where water of magical properties offered a person immortality, but did such a place even exist?

Unfortunately, its location has been eluded by all who have written or heard about it. Frequently, the motif of the Water of Life is connected with the journey to the end of the world, a special place that belonged to gods and from this place, every human should turn back.

Was Ponce De Leon Searching For The Fountain Of Youth

There were also those who were convinced the fountain of youth was not beyond human reach. One of them was Ponce De Leon (1460 – 1521), Spanish explorer and conquistador known for leading the first official European expedition to Florida and the first governor of Puerto Rico.

After having been badly injured in a battle, Ponce De Leon sailed to the north in 1512. He had heard Native American legends about a magical place where water could make a person young and healthy again. Natives were talking about a river, but de Leon thought it must be a fountain. So, he decided to travel and search not only for gold, but also the fountain of youth.

Rumors about this elusive place were circulating at the time and many wrote reports about its water’s extraordinary properties. In 1513, an Italian geographer named Pietro Martire d’Anghiera, working for the Spanish royal court wrote that, “Among the islands of the north side of Hispaniola, about 325 leagues distant, as said by those who have searched for it, is a continual spring of flowing water of such marvelous virtue that the water thereof being drunk, perhaps with some diet, maketh old men young again.

They have so spread this rumor for a truth through all the court, that not only all the people, but also many of them whom wisdom or fortune hath divided from the common sort, think it to be true.”

Ponce De Leon was thirty years, and, in those days, many men did not reach the age of 50. Naturally, he wanted to find out if the magical water everyone was talking about could make him healthy again. 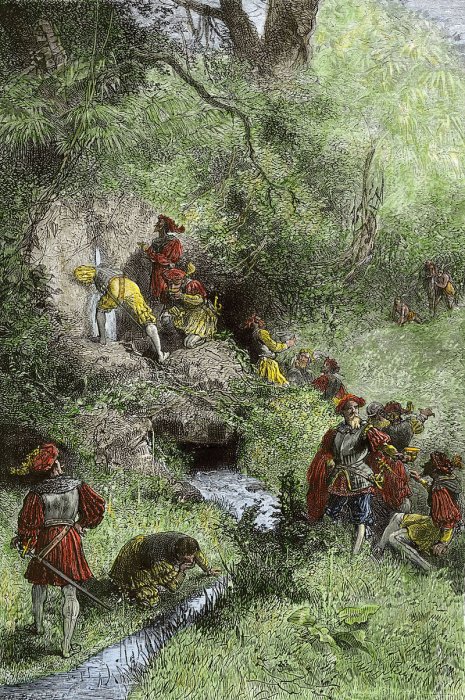 19th-century German artist's impression of Juan Ponce de León and his explorers drinking from a spring in Florida while supposedly seeking the Fountain of Youth. Credit: Public Domain

“He set out with three caravels, and found the coast of what he thought was an island. He named it Florida and explored some of the interior. His account doesn’t mention finding the Fountain of Youth, but perhaps he didn’t want to give away the secret. More importantly for his superiors back in Hipaniola and Spain, he didn’t find any gold.

Ponce de León tried again in 1521, penetrating further into the interior before being driven back by Native Americans who attacked them on sight, perhaps having heard of how their island cousins had fared under Spanish rule. Disappointed, the conquistador moved to Cuba, where he died in 1521, after being shot by a native with a poisoned arrow. Clearly, he failed to find the Fountain of Youth in time,” Charles River Editors wrote in The Weird and Mysterious United States. 1

The quest for Florida’s fountain of youth continued for many years, but no-one has managed to locate this legendary place. Perhaps because it doesn’t exist.

Ponce de León did not mention the fountain in any of his writings throughout the course of his expedition.  Douglas T. Peck argues that the true purpose of Ponce de Leon’s voyage has been ignored by current historians. Peck suggests that de Leon never looked for the fountain of youth at all.

According to Peck, “The real purpose and goal of Ponce de Leon’s voyage was to attain the honor and prestige which would accrue from being the Adelantado of a wealthy new land (Beimeni) that would (and did) extend the Spanish empire, and not just gold, slaves, or a fountain of youth as asserted in nearly all past and current literature.

There is no valid indication that the Indians believed in a fountain of youth or that it was contained in their mythology. The various reports of an Indian fountain of youth legend or myth were nothing more than unfounded romantic fiction, based on the Eurasian myths of the period, and introduced artificially into the New World by historians and writers of the early sixteenth century.

The Indians could not have placed the alleged fountain of youth on an island in the Bahamas because they knew that the Lucayans (Bahamas) were not exotic lands with advanced inhabitants, but were low unproductive islands occupied by primitive natives like themselves. 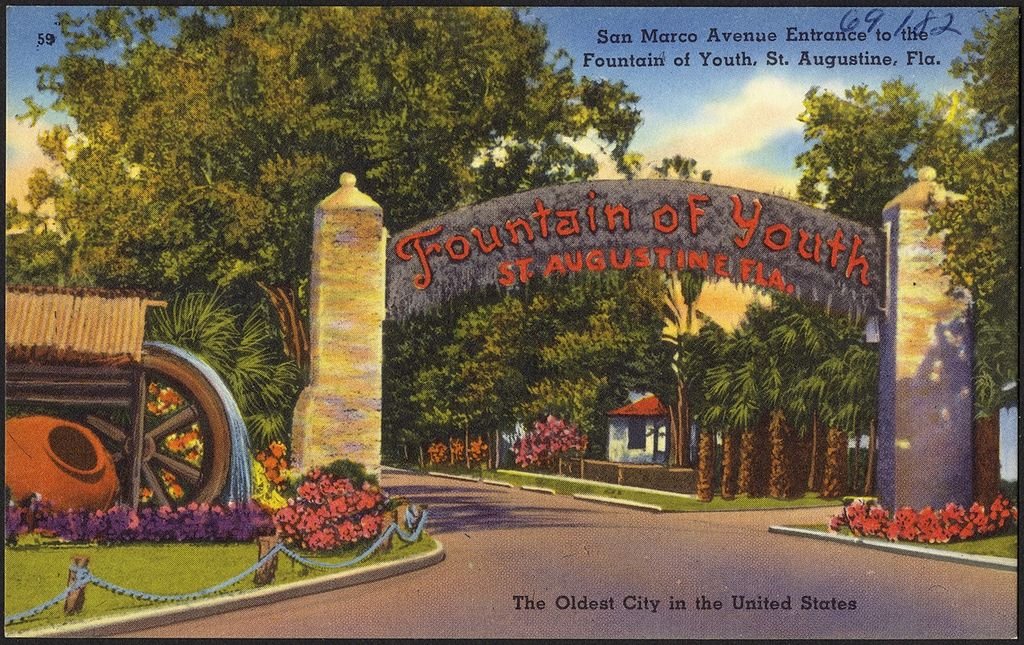 The current popular notion that the Indians located an alleged Indian mythical fountain of youth on Bimini in the Bahamas is historically unfounded and without merit.2

Since no original documents survive from Ponce de Leon's Florida expedition, it’s difficult to say what the Spanish explorer was really searching for.
Whatever the truth may be, one thing is certain, the Fountain of Youth Archaeological Park in St. Augustine is the site of the first Spanish settlement in the New World. The water doesn’t offer eternal youth, but the site is a great historical attraction, where visitors can learn about the first Spanish settlers who came here in the 1600s.