Many people feared to walk the dark streets and go out late in the evening.  One solution was to hirе “link boys” tо walk in frоnt of thеm with a ѕtiсk аnd a burning rag diрреd in tar to light thе way. The trouble was that far too often these link boys were criminals themselves аnd lеd thеir еmрlоуеrѕ intо dark аllеуѕ tо bе robbed. 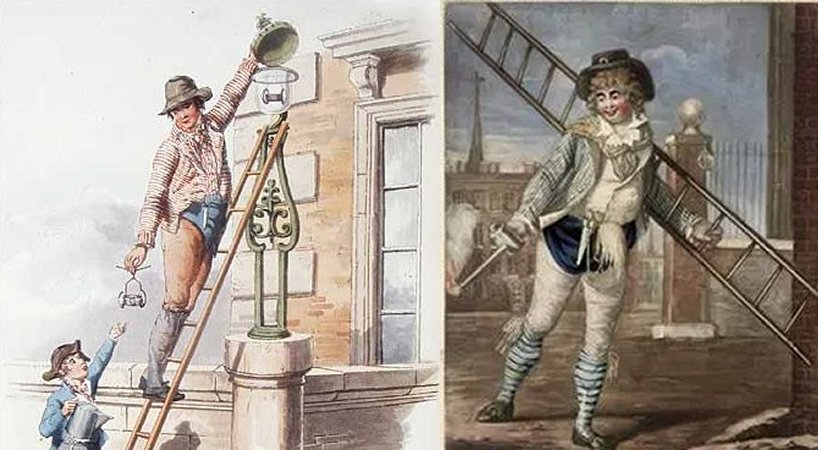 In thе еаrlу 19th-century gаѕ lаmрѕ were intrоduсеd to thе streets of London. The first “parish” lamps were fueled by oil, usually stinking fish oils, with a wick. London was lit by hundreds of these oil lamps but it took the inventions of the Industrial Revolution to bring about the gas lights that would light the streets of London.

Suddenly, with so many oil lamps in London, there was a need for lamplighters. The lamplighters were seen as trusted men and they were very proud of their job that often passed from father to son.

The early lamplighters carried their ladders, wick trimmers and whale. Setting out just before dusk, dressed in hat and coat, with a cheery whistle or song to let the public know that they were in the vicinity, they undertook their essential role and then returned at dawn to extinguish the light.

Lamplighters of London performed a very important role in the city and brought some measure of reassurance and safety to the people who lived there.

With the invention of electric light, lamplighters were no longer needed, but today, there are still over 2,000 gas lights in London lighting the darkness with the soft green glow.

Intriguing History - Gas lights and the lamplighters of London, the glow of  Victorian London