Ellen Lloyd - AncientPages.com - Among native Americans, the Apotamkin is a dangerous sea creature that lurks along the coast of Passamaquoddy Bay between the U.S. state of Maine and the Canadian province of New Brunswick.

The Apotamkin myth is about teaching children the importance of obedience. They must understand how dangerous it can be to visit some places on their own without parents. 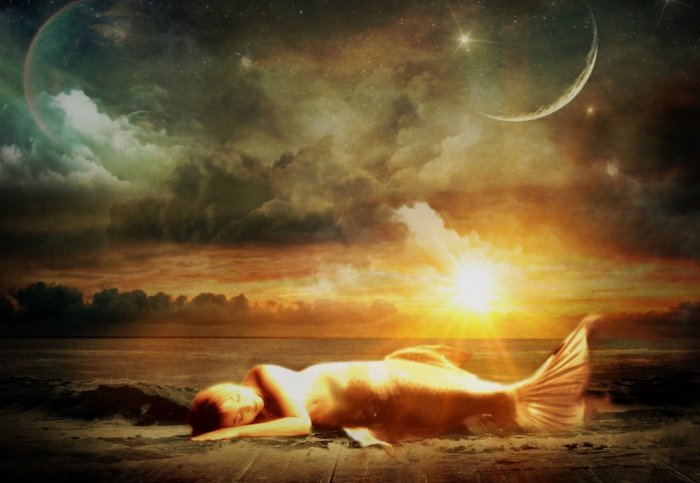 There are many different descriptions of this mythological sea monster.  Sometimes it is said it to be a humanoid with red long hair and sharp teeth. In some stories, it is described as a wicked woman who once transformed into a giant sea serpent. On other occasions, the Apotamkin is described as a mermaid.

The most important aspect of the Apotamkin myth is to convey an important message to children and convince them not to venture too close to dangerous bodies of water alone. Children are told that Apotamkim lies hidden in the Passamaquoddy Bay, and the sea creature will consume young children and other innocent victims dragging them down to its underwater realms.

Because of the popularity of the Stephen Meyers series Twilight, many non-Native Americans assume the Apotamkin is a vampire because the author used the term in the book. However, this is not true according to the Maliseet and Passamaquoddy tribes of the Northeast. Of course, there are some similarities between the Apotamkin and a vampire, but that’s only natural because mythological creatures often share the same traits. In some cases, the Apotamkin can cause a heart to freeze and a person who spots this creature can become so frightened that he or she may have a heart attack or stroke.

Nevertheless, it’s important to remember that although is Apotamkin is defined as a monster it is not always an evil being. On the contrary, Apotamkin’s presence in the waters prevents children from accidental injuries and death. The Passamaquoddy tribe believes Apotamkin is a benevolent monster that protects children from falling through weak ice and other disasters.

Stories passed on from generation to generation play an important role in Native American culture. Myths and legends told by Elders can explain the creation of life as well as the history and culture of Native Americans.

Many Native American myths are also deliberately told to provide children or adults with advice how to proceed in life. These are powerful stories that convey important messages and it can sometimes take a while before we understand the deeper meaning behind these myths. The rich oral tradition of Native American storytelling can be rather complex, but it’s nevertheless truly fascinating. Mythological creatures such as for example the Heyoka, a sacred clown encountered in Native American mythology, teaches us valuable life-lessons.

Maberry, Jonathan - Vampire Universe - The Dark World of Supernatural Beings That Haunt Us, Hunt Us, and Hunger for Us